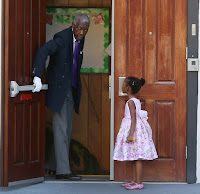 But how do you really feel? Many have reacted to a recent Pew Forum survey with the latest indications of church decline. Many are naturally talking about the church dying. But Maggie Nancarrow sees it a bit differently:

The word “dying” is passive. It is as if we are sitting around quietly wilting away why the culture around us turns against us and decides that they’re not interested in God anymore. It is as if gradually nobody wanted to play with us on the playground anymore. It suggests that we did nothing to engender this reaction. And friends, let’s be honest–we did.

But, let’s not go on a guilt trip. The point is that I have never noticed or perceived that people were not interested in God anymore. People are incredibly hungry for God. It isn’t that people don’t want to experience God. It is that The Church of the 1950s is failing to be a place where that happens.

When the church becomes the establishment, it gets comfortable. When the church becomes comfortable, it doesn't worry so much about innovation or growing disciples. Perhaps it's a fine line, because death can come when people don't take care of themselves, when people fail to take care of themselves; to give the necessary attention and do the necessary work to stay healthy.

Nancarrow's point is that the church is actively complicit in its own decline due to its ignoring the change and needs around it. When we choose not to respond to our shifting reality, we fail to acknowledge what we need to do.

No, seriously, don't hold back. Holly Baer would like you to stop trying to explain why people leave churches:


First of all, every single article is presumptive. They assume that the growing “Nones” and “Dones” are leaving for superficial reasons like bad church music or just not understanding Christian Lingo. Frankly, there’s no easy way to explain why people are leaving because everyone leaves for different, deeply personal reasons. These assumptions portray millennials as entertainment junkies willing to abandon a church if it doesn’t have three guitars and at least two fog machines, that or woefully ignorant people who won’t take ten minutes to learn the terminology of the church.

Please, for the love of God, stop assuming you know why the Nones or Dones leave the church better than they do. Stop assuming it has something to do with the superficial. Stop assuming these leavers have never delved into scripture. Many are well read in scripture and church history, I know I am. I’ve personally read the Bible no fewer than eight times, each time with the fervor of a devout woman trying desperately to know her creator, and I still left.

I'm amazed at how often "fog machine" makes its way into these posts. Although I've been known to use "climbing wall" fairly often. Tomato, tomahto, I suppose.

Anyway, Baer brings up a point that I've come to believe with increasing conviction: that any article purporting to explain for an entire demographic why they left the church is incomplete at best or, as Baer puts it, "focuses on the superficial." People leave churches for reasons deeper than liturgy vs. fog machines (or climbing walls), and every individual will have their own.

But I'll probably keep reading such articles, because that's what I do.

Speaking of "more than superficial." Brant Hansen reflects on church unity in light of the events in Charleston:


People say they want unity. They say they want “radical”. But when it comes to a fundamental re-thinking of our church structures and arrangements, and our own comfort, things get less radical really fast. I understand that.

Let’s at least admit it: The people of Jesus are not, by and large, functioning as true brothers and sisters, and suspect another program or get-together’s not going to do it. We need to actually know each other, be in each other’s lives, and make it work.

We need to ask God to redefine our “us” to mean His family, not our racial group, and make Jesus real to a world that is clearly without a chance otherwise. Why am I talking about this now? I had a death in the family. My brothers and sisters died at a Bible study the other night.

As I've written, I was at the UCC's General Synod last week. Synod always features great big visions about unity and justice, where we are invited to envision a radical new way of being the church that crosses artificial dividing lines of race, class, and orientation to truly be together in fellowship, dialogue, and understanding. How often this actually happens is a much different story, and it takes more than choosing from one of the many designations available in my denomination (multiracial, multicultural, open and affirming, etc.) and applying it to one's church. It involves conversation, study, risk, and intentionality. That takes giving something of ourselves in order to reach out to others.

Remember this in the next year or so. Carol Howard Merritt reflects on the market for books by progressive Christian authors, and how things could be better:


Progressive Christians are readers. That’s what sets us apart. It's so important to us, that some of us even have book allowances figured into our salary. But if we don't support writers, we won’t have any market in a few years. If we don’t support new artists or diverse voices, they will go away. Authors have mouths to feed, college bills to shell out for, and housing costs to pay. If they can’t do those things by writing, they will have to find another way.

Simply put, if the market isn't supported, publishers assume there is no market and stop supporting such voices. And then there really is no market. I've had this article in my head ever since I read it, and have been inspired to be more intentional about supporting authors, particularly those who don't serve megachurches or fly under the Emergent banner.

You could start with the RevGals' book. And when some other weirdo I know finishes his book, you could help him out too. But, like, only if you want. I guess.

Dress like you mean it. PeaceBang reflects on the impact of clergy fashion choices in light of the Charleston shooting:


If you’re still pushing back against the message that clergy need to be sharp, shiny, put together, and as impressively dignified as we can muster in our bearing and our attire in the public square, let me tell you that your schtick isn’t just old and tired, it’s dangerously lazy. It’s unconscionable, in fact.

Who are you to slob around in jeans and Tevas looking like you aren’t ready to stand up against the most powerful evils humanity knows how to dole out? Who are you to throw on a fringed batiked sundress and go out into the community representing an institution that just suffered the cold-blooded murder of nine of our sisters and brothers?

If we are all not in mourning right now and walking taller and sadder and pained today and for a long time to come, I would like to know why not.

I know that not all my pastoral colleagues appreciate PB's opinions on the ways clergy should dress. I don't buy into everything either, but she has made me more thoughtful about how I present myself as a pastor, and to consider what my attire choices communicate. Ultimately, fashion is contextual, both in terms of region and situation.

Looking "put together" is going to have different particularities depending on where you are. You know your context better than PB or anyone else. I can't even imagine any colleague of mine walking into a hearing or up to a public podium in jeans and a t-shirt to speak to the evils of our times. But I also can't imagine them walking into a homeless shelter or, depending on the family, a consultation to plan a funeral in a 3-piece suit, because the situation simply doesn't demand it. But certain things do. The prophetic voice sometimes calls for the best of your wardrobe. Then again, camel's hair and a scraggily beard worked pretty well for one guy I've read about, too.

There's a time and a place for everything. Know your context and go with it.

Rights matter, because love matters. Funeral director Caleb Wilde reflects on why the Supreme Court's recent ruling on marriage equality is so important to so many:


As a principle, I believe that those who love us in life should be the ones who take care of us in death.

In places that lack LGBT rights, that simple principle is denied to committed LGBT couples.

Without a legal recognition of marriage, a gay or lesbian couple doesn’t have the next-of-kin right to make funeral arrangements. That right either falls to the deceased’s children and / or parents. And too often — and I believe this is changing — those parents or children barred the deceased’s partner from any involvement in the funeral. I’ve seen this circumstance play out on a number of occasions. It’s hurtful, it’s difficult and it’s intrinsically wrong.

Caleb follows this up with another post that includes a story of a man who was barred from the hospital room of his dying partner by the estranged family who hadn't been in contact with him for 30 years. Why? Power, and the principle of it. This is what hate does. And now married LGBTQ couples don't have to go through that any more.