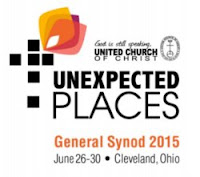 As I mentioned the other day, the 30th General Synod of the United Church of Christ took place in Cleveland at the end of June. Since this was basically in my backyard, I was eagerly anticipating this event ever since it was announced two years ago. This was my fifth Synod, although I hadn't attended one since 2009 in Grand Rapids.

I wore a few different hats during this Synod, although none of them were that of a voting delegate, which was a first-time experience for me.

The first hat was that of a volunteer through the Ohio Conference, which served as the host conference for the event. Each volunteer is required to sign up for at least two shifts, so I chose to usher at the Friday and Sunday worship services. This also afforded me a major discount at registration, which didn't hurt either.

The second hat I wore was as co-moderator of the UCC 2030 Clergy Network, which planned several activities throughout Synod for younger authorized UCC ministers. The first was our Pre-Synod event, during which we gathered at South Euclid UCC for a day of worship, keynotes, and conversation. We had Bishop Yvette Flunder with us for the day, and she spoke powerful words to us about ministry and its many burdens and blessings. On Saturday of Synod, the Network hosted an after-hours gathering at an area restaurant, which effectively marked the end of my 3-year term on the National Planning Team. When it came time for me to leave, I was sent out with a round of applause at the prompting of a dear friend, which was a fun moment.

When I served as a delegate to General Synod 2005 in Atlanta, I attended an after-hours gathering for younger clergy. Little did I know that that earlier event would help birth the 2030 Network, much less that I would one day serve in leadership. It's truly been a blessing to do so, and will always be a memorable and affirming highlight among the roles in which I've served in the wider denomination.

The content of Synod itself, as is often the case, was a mixed bag of experiences. First, I always experience Synod as a big family reunion. I was able to reconnect with friends and colleagues from across the UCC and from all stages of my life. More than a handful of these were people whom I've known through social media for years, and whom I was finally able to meet in person for the first time. I didn't meet everyone I hoped to, but there will be other opportunities for that.

Worship was also a highlight. Molly Baskette preached Friday on being brave to seek justice as a church. Dwayne Royster preached on Sunday about "changing the damn world," actually going out to do the Spirit-empowered work to which God calls us. There's something about 5000 people singing "Holy Holy Holy" that was incredibly moving.

I also attended several workshops. The first was on inclusion of trans people in congregations, which I knew going in was an issue I know next to nothing about. Over the span of an hour, I learned just how much I don't know about people who identify this way. But I know enough to know that listening and not presuming to speak on their behalf is my best option going forward. The second was a workshop on breaking the silence on mental illness in congregations. This was co-led by Sarah Griffith Lund, author of Blessed Are the Crazy. I hope to organize a community-wide event at my church sometime in the next year with her. If the standing-room-only crowd at her workshop was any indication, this is an issue with which many are deeply concerned.

The business of this Synod caused as much tension as I've ever experienced at these gatherings. To put this in perspective, General Synod 2005 featured resolutions on affirming marriage equality and divestment from companies that support Israel's presence in the Palestinian territory, as well as a pronouncement that would make it possible for people to pursue ordination in ways other than seminary. There was heated debate surrounding all three of these issues, and yet the votes on all of these, as I recall, were fairly clear-cut among the delegation.

In contrast, this Synod featured the discussion of changes to the by-laws that would alter the makeup of the leadership structure, transforming it from a shared model of executive ministers known as the Collegium to more power concentrated in the General Minister and President position with other executive positions designated by the GMP in consultation with the Board. Another resolution sought to declare Israel's occupation "apartheid." Both of these had a majority vote in favor, but didn't have the 2/3 needed to pass. Several other votes also seemed to come close. I can't recall ever being part of a Synod where so much business was so closely contested, let alone effectively voted down in such a way.

The by-law changes were probably the hottest issue. I heard from many before and during who were deeply troubled by the process, arguing that there was next to no discussion outside of the Board's own deliberation and decision-making and that we as a denomination with congregational-based polity needed more time to talk out its implications. I was on the fence about the issue, but was glad for the rich conversation and to hear from both sides who believed theirs was the most faithful decision for the church going forward.

All in all, I was glad to be a part of my first Synod in six years. The blessings of being with my fellow UCCers outweighed the tensions and hard issues we were together to talk about. I hope to be in Baltimore in 2017.
By Jeff Nelson
Email ThisBlogThis!Share to TwitterShare to FacebookShare to Pinterest
Labels: United Church of Christ
Newer Post Older Post Home