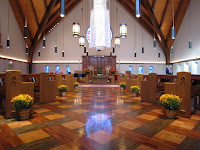 Only three? Drew McIntyre offers three myths about younger clergy. I'm sure he kept it to three because he was pressed for time:

One of the most persistent myths about young clergy is that if a church hires (or a bishop sends) a young pastor, young people and their families will instantly flock to the church. This is a serious fallacy. While a young pastor *could* be especially insightful in reaching young adults for Christ, discipling them and building relationships with them, it won’t matter a hill of beans if the church itself is not invested in doing the same. If you have never asked a Christian young adult what they think about the world or what they are looking for (if at all!) in a faith community, you need to rethink if you really want young adults in your church.

Reality: A young pastor can help, but it takes a congregation dedicated to knowing, investing in and serving with young adults to reach young adults. If you are praying for a young pastor to come so that she or he can do all the work of reaching young people, you are setting up that pastor to fail. You want a magic wand, not a pastor.

The other two are equally mythic and frustrating to dispel. As one who is only has a few years left now of what constitutes "young clergy," I don't hear these as often as I did when I first started. In fact, the only one I still get is the ol' "you're too young to be a pastor," which is actually nice in its way, but come on. You guys. Seriously.

Welp. The High Calling, a website on the integration of faith and work for which I wrote an article earlier this year, has come to a decision about its future:


Reader, think about where you are right now. We are connected in a sense. My ideas and words are flowing forward in time to when you will read them. They are translated into 0s and 1s and transported via cables to whatever screen you are viewing right now in whatever country you may be viewing it. In the past, we have allowed ourselves at The High Calling to become infatuated with sending our ideas out through time and space with new technologies. But the delivery of an idea to you is much less important than where you are right now.

So much good has come from this team, this virtual community. Now, we hope to help you engage even more in the community where you live.

So I get the principle of the decision. But the execution is counter-productive. For my part, I'd attempt to organize gatherings using the online tools and engagement I've had in place for years instead. Build something rather than tear something down. But that's me.

Nope. Afraid not. Michelle Torigian writes about ministry not being safe:


If we keep ourselves in the safest places in ministry and church life, we will never grow as clergy. If we decide to preach on safe subjects week after week, never take part in rallies, or never speak in public or write opinions for newspaper columns, we will never understand the ministry of Christ.

At no point of our ministry are we completely free from hazards, even if we hide under beds, change our names, and move to other cities. We can only stay safe for so long. Not only is ministry unsafe physically, but our hearts and souls are in harm's way as we place our most vulnerable selves on the line. We love extravagantly, and when our parishioner walks away from the church, we blame ourselves. When someone walks out of a sermon we've preached on a difficult subject, we question following the call of God. We wonder what we could have done differently if a congregant commits suicide or a crime. When we open our hearts fully to ministry, we will undoubtedly be hurt time and again when our loved congregants die and we no longer see their bright faces Sunday after Sunday. We will lose a piece of our lives every time our bodies, minds, hearts, and souls are threatened, but then we will gain something greater in return. Maybe we will see a glimpse of God's presence as fear dissipates around us.

Way back shortly after I started in ministry, I read a quote that has always stuck with me: "Pastors don't measure ministry in hours, but in scars." We don't put in a typical week the way many other professions do, but we feel what we do in other ways as we walk alongside others in grief, need, loss, despair, and anxiety. And there come those moments when we put ourselves out there in order to try to move the church forward, and deal with pushback and occasionally get outright burned along the way. It's certainly not for the faint of heart.

Is that the 5 or the 6? Erik Parker uses a fun metaphor to describe what it feels like at times to serve as a pastor in established churches:


I remember when I first got my iPhone and would pull it out to make appointments or send messages in front of parishioners. They would often look at me like I just beamed down from the starship Enterprise; these were people who remember riding to school in a horse and buggy.

But more than that, when I sit in most meetings or conversations with church people, the discussion ends up being full of cultural references that pass me by. TV shows, music, movies and historical references from the 50s, 60s, and 70s, of which I don’t understand the meaning, are regular parts of conversation. While at the same time, I have to park my cultural baggage. I can’t make Friends or Breaking Bad or Jay-Z or Mumford and Sons or Hipster or Twitter references because most people won’t get them.

But it isn’t just pop-culture symbols. It goes deeper than that.

The outside culture is whizzing past, and the church is still dawdling along trying to make sense of it. By the time we catch up to where we thought the culture was, it's already zoomed forward again. As he says, we're still using typewriters while the culture is using iPhones. Metaphorically speaking. But also maybe literally.

Now, there are certain things worth preserving related to ritual, heritage, and theology that ties us to where we've been, but even those things need to be related to a new day that has brought new discoveries and information to light that we didn't have before.

After watching this, I realized I use a few of them in my book. I am still debating whether to edit them out.

My one quibble is that Emergent should not be conflated with progressive. But I don't want to write about that any more.

I have my own reasons for loving this. Richard Clark suggests that sanctuary carpet is one of the enemies of congregational singing:


Wood, marble, or tile, on the other hand, reflect sound. Churches with no carpeting are so much easier to sing in. One does not have to constantly sing loudly to fill the nave. A smaller choir can be more supportive of a congregation. One can utilize a broader range of dynamics. Those with weaker voices can contribute. Those with strong voices will flourish.

Microphones may be rendered unnecessary or utilized selectively. Relying only on the natural sound tears down the wall between musician and congregation. It gives the voice back to the people! And this is what chant and hymnody have done so well for hundreds upon hundreds of years.

My third year of seminary I served in a church with a beautiful sanctuary (see the pic at the top of the post). It had a tall wooden ceiling and hardwood floors. Music reverberated through the room and gave it a rich quality that I haven't experienced in many other churches. Speaking there was a little more tricky, as there could be quite an echo with the microphone, but that could be managed.

My current church has a ceiling akin to that church I was a part of so many years ago. But the floor is covered in a burnt orange carpet that somebody thought was a good idea when the sanctuary was built in the 1970s. Getting rid of it and replacing it with basically anything is on my wish list. But with the ceiling we have, hardwood would really add something to our singing.

Misc. Jan Edmiston on being Amy Schumer's pastor. David Wheeler on the decline of middle-class clergy. American Christianity has been hijacked. Yeah, we know. Momastery's one mantra to survive summer is hilarious.
By Jeff Nelson
Email ThisBlogThis!Share to TwitterShare to FacebookShare to Pinterest
Labels: Church, Funny If It Wasn't So Sad, Ministry, Small Sips
Newer Post Older Post Home