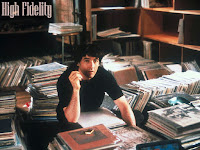 I've been thinking lately about my tendency to collect things, and this post from February 2012 sprung to mind as a result. Of course, that's not the main point of this post, which I can now appreciate in a new way since writing it. This also seemed timely given recent society-wide conversations about religious freedom and privilege. I think it holds up pretty well.

One of my favorite traveling memories is of the day Coffeewife and I drove into New York City with my brother and his then-fiancee. We'd taken the trip to see my grandparents in Tenafly, a short 20-mile car ride away (accounting for traffic, of course). It was early January, which in that region means freezing temperatures and the sort of wind that feels like it's going to cut right through you. We bundled up, layer upon layer, and made our way to our destination.

We parked in a nondescript parking garage, but a parking garage was not what we went to see. The sights, sounds, tastes, and smells were just a few blocks from where our van temporarily rested. It's curious, as I think back on it, how the assault on the senses grows the closer you get to the center of town. There are a few billboards and giant tarps touting the wonders of this product and that location, and then there are many, overlapping and running against each other like a great consumerist mosaic. There are little pockets of tourists and people on their way to work, and then they blanket both sides of the street, bumping and moving as a herd; if something happens while you stop for a moment, it's your own fault because clearly we're on our way.

The traffic does not control the movement of downtown New York. The people do. This is a fact. If the light is green but there's a wall of pedestrians blocking your path, what are you really gonna do? Honk? Good luck with that.

When you reach Times Square, there is no movie or TV show or picture that can truly capture what you find there. The screens and lights streaming headlines and stock values from one side and demanding that you drink this soda on the other flash for stories and stories high above you. The steady hum of cars and buses, occasionally augmented by someone who thinks his horn is going to part that wall of people, is a constant low rumble against the eardrums. The smells? Don't think about those too much.

I ate a hot dog that day on the edge of Central Park. How many episodes of The Sopranos had I seen featuring this place? How many times had I watched Venkman, Stanz, and Egon deal with the movie's centerpiece haunted apartment complex against this backdrop? And yet those were two-dimensional images that didn't include how this hot dog tasted, the puree of cultures around me, how tall the buildings really are up close.

I didn't take any pictures that day. I probably should have, but I didn't. Instead, I remember that hot dog, for some reason the key memory that unlocks everything else for me. Even if I did have pictures, you wouldn't see the people and buildings the way I saw them. You wouldn't hear the constant noisy bustle. You wouldn't be able to smell or taste the hot dog or feel the cool January wind chapping against your cheeks.

That moment was its own entity, its own experience. I could show you pictures if I took any, these artifacts that I can hold in my hand and give to you and then take back, but they wouldn't be the moment itself.

I have a "collector's personality." I like collecting physical items. I grew up in an age when cassette tapes were a huge part of the music business but CDs were just beginning to take over. Even in my elementary years, I was proud of my tape collection, and as I grew older I became equally as proud of my CD collection. I would look at them lining my shelves and randomly rearrange them according to genre, then alphabetically, and even chronologically according to when I bought them. I once considered going the "autobiographical" route a la High Fidelity, but such a task seemed too daunting.

Nevertheless, I loved looking at these physical items, marveling at the massive quantity, lazily flipping through them and trying to decide which to play; which fit my mood at a given moment.

This musical love has translated to the digital age, though it is a different kind of pride, I think. I scroll down through my iTunes list and feel a pride similar to when I used to look at those stacks of CDs, but I admit that it's different. Other than my iPod, I have no physical thing to marvel at. With tapes and CDs, I had mounds of physical representatives of my musical collection. I owned these representatives, I could point to them and have guests gaze at their spines. With newer technology, I have a list, which is okay, but it's not the same.

But the physical item is not the song itself, is it? For as long as these stacks sit in rows and for as long as the titles and artists grace my list, they remain stacks and lists. They indicate the musical options available to me, but only one song plays at a time, and for only as long as that song lasts.

When I actually choose to play something, that's when the song truly does what it's meant to do. Whether the gut-busting drums of a heavier, driving tune or the wandering piano of something slower and more pensive, the song begins and then it ends, and it only truly exists while it plays. It bends airwaves for a few minutes, evoking particular emotions, and then it declares itself finished and I am once again left with an album or a computer screen, a souvenir of the experience itself. I can try to describe how a song made me feel and I can tell you that I own a device containing the means to play it, but only when it actually plays does the experience of a song even become possible. I can play it for you, hoping that you'll find the same meaning in it that I did, but there's no guarantee. You may grate at something I find profound, you may instantly love what it took me a few weeks to grow into, you may suggest an alternative that you argue is superior.

Pictures and stories. Potential or passed moments miraculously contained in plastic. People claim that they own these things. They fight in court over who has the rights to artistic depiction and expression and how much credit and payment they should receive. But nobody owns a reaction. Nobody owns the tears of joy or sadness that something evokes. Nobody owns a life altered. Nobody owns the moment itself, nor its remaining imperfect memory.

We do this with God, of course. Sure, we don't usually use the language of ownership, but words and actions betray us. There are so many who feel the need to defend God from others: non-believers, culture, other belief systems. We keep Bibles, crosses, churches, and other trinkets big and small close by. They are reminders for us, but they may also provide this sense of having a claim on things: this is MY faith's book, MY faith's symbol, MY faith's building. My faith and my God is encompassed by this physical thing that I can show you, read to you, share with you, invite you to. And how easily we confuse these items with what is beyond them; what they point to. How easily we mistake our synthetic reminders for the divine experience itself. Some try to start fights over which physical artifact is worthy of some normative, elevated status.

We can't control how people experience these things, as much as many try. Words and melodies and events occur in times and places for people who bring with them all their relationships and history and personality. And maybe they receive and maybe they resist and maybe they want a little more or a little less, but that moment where a human's complexity bumps up against some expression of Big Truth, the reaction and the result is for that person only, in that moment only. It may be important to process and explain and clarify and hang onto a relic afterward, but it's damn near impossible to replicate perfectly for someone else. We try, of course, and trying may lead to something like it or it may lead to cheap imitation, fanatical coercion, or rote foolishness.

The moment itself only exists as it happens to each of us. We can write about it, speak about it, show pictures of it, play something that triggered it, but you really had to be there, in my spot, with my history, having my experience. But since you weren't, all I have are my shelves and lists, and my feeble attempts to explain.
By Jeff Nelson
Email ThisBlogThis!Share to TwitterShare to FacebookShare to Pinterest
Labels: Vintage CC
Newer Post Older Post Home