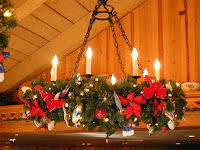 Reading God between the lines. My colleague Emily Heath recently wrote about taking a break from reading books on theology and church. It turns out she still ended up reading quite a bit about faith issues:


I do not believe theological and church-related books no longer have a place. They certainly do. I wouldn’t be writing one if I didn’t think so. I’m thankful for just about every book on God and God’s people that I’ve read through the years.

But for me personally, during this season of my life, I had to step back and away and hear things in a different voice—more poetic than technical. At least for a little while.

It’s a sort of literary sabbath, and I have found only greater energy and passion for ministry, especially for those aspects of it that require creativity. I know, for instance, that I wouldn’t have been able to write a book on faith if I were not taking a break from constantly reading words written specifically about it.

I was in the same boat for a little while, at least in terms of church growth/administration sorts of books. They all started sounding the same and didn't seem very edifying.

Emily is suggesting something more radical and profound than that, though. She's talking about forsaking all manner of explicitly Christian books in favor of novels, poetry, justice, and so on. God is to be found there as well if we're able to listen.

(Did I mention that's what my book is about?)

Like. Also, dislike. Peacebang names the tension some clergy feel regarding being friends with church members on social media:


Some folks may fall down a rabbit hole of following their minister’s writings or postings, sure. But healthy people do this out of curiosity and the desire to better understand or know someone who fascinates and influences them and they do not carry a yellow highlighter along the way, looking for offense and feeling entitled to present their findings.

I hope none of you will feel compelled to edit and delete your honest observations because someone bullies you into it.

We all say things we regret, and it may also be that we take time to develop our own social media best practices and make some mistakes along that way. So what? Are you a criminal? Are you a terrible person? Probably not. And if you are, that will be discovered by other means than stalking your Facebook page.

Being yourself in all your interesting complexity is not objectionable. Also, lest you forget, not everyone needs to like you. It’s part of this generation of ministers’ task to pop the balloon of old, outmoded clergy archetypes.

I'm glad parishioners feel comfortable enough to "friend" me and invite me to be a part of that sphere of who they are, but at the same time I tend to be slightly self-conscious about what I share. But I balance that with the thought that if you're connected to me on that medium, you're inevitably going to see how human I am; that I'm not the saccharine image you had in your head because I'm a pastor.

It's a tough line to walk, and some end up getting burned for it. That's really a shame.

Welp. David Hayward, aka nakedpastor, shared this cartoon a few weeks ago: 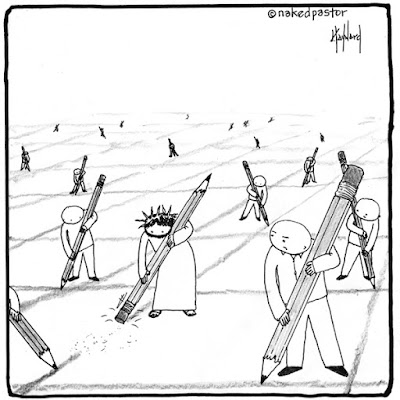 Yes. It will. Whitney Cox, a Religious Studies adjunct at the University of Houston, shares her reply to a student concerned that her class might challenge their faith:


I find frustrating the too-frequent sentiment from Christians that equates interrogating and examining the texts with destroying faith. There is a strain of anti-intellectualism in modern US Christianity that is vile, unbiblical, and deadlier to faith than scholarly examination could ever be. It demands an unquestioning obedience and punishes anyone who doesn’t conform to the party line, who dares to question the people in power.

I am forever angry at the orthodoxies that demand literal belief as an all-or-nothing proposition, not only because that kind of approach makes you immune to reason, but because it means that more likely than not, that one bit of counter-information that makes it through takes down the rest like a Jenga tower. I’ve seen this a lot with people raised as strict creationists but who later realize that the scientific support for evolution is overwhelming — and because they’ve been taught they can’t doubt one part without doubting it all, they end up tossing it all out the window. Because they’ve learned that any questioning is evil, they decide they have to take all their questions elsewhere.

All of which is to say, again: Yes, the class is going to make you uncomfortable. It’s probably going to make everyone uncomfortable at least once. But at the end of the day, you’re going to have to be the one who decides on your own what to believe. All I get to do is tell you what the text says.

I had many difficult moments both in undergrad and in seminary because I was pushed to think harder and more deeply about my beliefs and my approach to the Bible. I struggled quite a bit and I had more than one faith crisis, but I came out stronger and more open to how much bigger all of this is than me.

Not everybody shared my appreciation or my experiences, and there were some conflicts around that. I no longer fit the orthodoxies that Whitney mentions, and some relationships were damaged as a result. But as a result of all that wrestling, I at least figured something out about faith, the hugeness of God, and my own limitations, and learned to be comfortable with those things. Hopefully this student does, too.

I will begrudgingly concede your point, with caveats. Courtney Patterson offers some pushback against those of us who grouse about Christmas kicking off too early:


Here's a little confession for you guys: When we set up our Christmas tree last year, I kept that baby sparked up until the end of June. Why? Because it made me happy, it made my daughter happy and it brought joy to our home, plain and simple, and I make zero apologies for it because here's the thing...

I never wanted that good feeling to end. Yes, in the times we live in, the holidays can be stressful and consuming but I've often found far more joy in the holiday season than bad. It's the one time of year where you can actually see the good in humanity. People extend beyond themselves to reach out to others and often times, you will witness many a "Christmas miracle."

I love the joy and wonderment in our children's eyes as they marvel at all the season has to offer but most importantly, the season centers me and makes me feel whole as a human again. It does, it really does. I'm reminded of how eternally blessed I am and how I have the opportunity to bless others' lives as well. It is truly a miraculous time of year.

Honestly, with everything going on in our world today, couldn't we all use a little more joy and peace on earth? I think so.

The part of this post that really caught me was her description of "holiday-shaming:" actively yelling at those who start the decorations and music and cookies in early November. I hope that I have not been that person, but I suspect that I have been more than once. I will note this for future reference.

I understand why some look forward to this time of year so much: it's a source of great joy, and there's a limited window to experience it.

But for me, that's fall. All of it.  I love all the practices and celebrations that make September through November what it is, and I prefer that our day especially set aside for gratitude to remain its own distinct observance. Right up until I finish my pumpkin pie on Thanksgiving evening, I want to savor every moment that I have with this season before it disappears for another nine months.

So I'll respect people's preference to break out the garland and carols early. But is there some way they can respect my preference not to as well?

Misc. Jamie on getting a tattoo. All her points are true, in my experience. Jan on what churches can learn from Wal-Mart. Yes, really. Will Willimon on the church really acting like the church. Chaplain Mike on the importance of pastoral care in churches.
By Jeff Nelson
Email ThisBlogThis!Share to TwitterShare to FacebookShare to Pinterest
Labels: Advent/Christmas, Church, Ministry, Small Sips, Theology
Newer Post Older Post Home