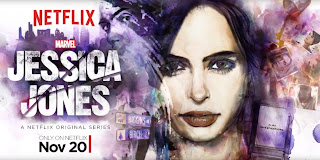 1. The first season of Ash vs. Evil Dead concluded early this month. The show is faithful to the source material of the movies, combining the over-the-top gore of Evil Dead 1 and 2 with the humor of Army of Darkness. The finale was well-done, even if initially I didn't know what to make of the ending. The character of Ash Williams remains torn between being a badass hero spouting one-liners and a self-centered buffoon, and in the end he tries to reconcile the two as best he can, even if he could have done much better. Plus we're set up for season 2, which I imagine will just be a continuation of the first given how it ended.

2. After hearing so much positive acclaim for it when it was released in November, we finally binge-watched our way through the first season of the Netflix series Jessica Jones this month. Played by Krysten Ritter, Jones is a superhero trying to make a living in Hell's Kitchen as a private investigator while also dealing with PTSD. The latter is from her past entrapment by Kilgrave, a powerful villain who can control people's actions by suggestion. David Tennant plays Kilgrave with equal parts humor, vindictiveness, and creepiness, and the series explores themes of recovery and trust, among others. Luke Cage, aka Powerman, is also a supporting character, and I've read that this will eventually lead to a Defenders series that will include Daredevil and others. Since I'm also a fan of that show, I look forward to how this will develop.

3. This month TBS ran a 25-hour marathon of Angie Tribeca, a new detective comedy starring Rashida Jones. For the longest time I didn't know what it was, and then commercials finally gave enough clues to make me want to check it out. I found the show incredibly reminiscent of Police Squad and the Naked Gun movies, with lots of sight gags, puns, and ridiculous nonsensical humor...all of which is right up my alley. I laughed my way through every episode and can't wait for the next season.

4. The Silo Effect by Gillian Tett was one of my first books of 2016. Tett's book explores what happens to organizations when divisions within them are too isolated from each other, prioritizing their own resources and interests over communication and collaboration (hint: things don't go well). She uses examples from New York's City Hall, Sony, Apple, and Facebook among others to show both the positives and negatives of having silos and breaking them down at least enough to further the interests of the entire entity. I was pleasantly surprised at how engrossing I found this exploration of organizational theory, and I'm sure I'll be adapting its lessons in my ministry context.

5. One of my first albums of the year was Shearwater's latest, Jet Plane and Oxbow. It's their 9th album, but this was my first time hearing about them. Shearwater seems to have a wide variety of influences as evidenced by their use of synthesizers, dulcimers, guitars, and some pretty sweet drum beats, among others. Their sound is strong and lyrics intense, and I was glad to discover them. Here's a track from the new album, entitled, "Quiet Americans:"