What are we talking about? One of my New Sacred co-contributors, Patrick Duggan, proposes a list of suggestions for the United Church of Christ's "sacred conversations on race" that its various entities host from time to time.

They're all provocative and thoughtful, but I wanted to focus on this one:


7. Before participating in the conversation, the convener must provide to everyone a list of definitions a week in advance on the terms “race,” “racism,” “racial/ethnic prejudice,” “class,” “Jesus’ preferential option for the poor,” “white supremacy,” “white privilege,” and “#BlackLivesMatter.”

Honestly, I think that a big issue for conversations like these, even between a few friends on social media, is misunderstanding or ignorance of the terms involved. It's been my experience that many don't know what people mean by "white supremacy" or "white privilege." I don't know if I understand them properly either, even with the benefit of following a number of activists on Twitter. Having a commonality of understanding around these phrases is an important first step.

Eeyore goes to church. Anita Bradshaw reflects on the narratives that churches choose to believe about themselves:


As I traveled home, I thought back through all the various conversations we had had together over the course of the consultation as the congregation’s story had slowly emerged. These were proud people who had worked hard all their lives. They had memories of a beautiful church in the middle of their farms that was packed every Sunday.

Their world and their church had changed, but the story now was one of loss and a deep fear that telling our story allows us to become stronger and clearer about who we are and what God is calling us to do.

Somehow they had done something wrong and were being punished as they watched their church slowly dwindle and die.

This is one manifestation of how a church processes its anxiety. If numbers are dipping or the neighborhood around them is changing, that reflects how they see themselves. Often, the story is one of failure or hopelessness in the face of change.

The thing is, this story doesn't get absorbed overnight. Enough small things get noticed and voiced by people worried about the future that all gets pooled into one large nexus of frustration that ends up permeating everything. Then the congregation starts acting accordingly, affecting its relationship to visitors and the community among other things.

So, I picked a good time to publish, then? Antonia Blumberg reflects on the rise in publishing of spirituality books:


This fall, HarperOne, the San Francisco-based imprint of HarperCollins, launched HarperElixir, a line of books specifically targeting people who seek the answers to life’s big questions.

“The audience is the modern seeker… people who are spiritual and magical and passionate and curious and they want to answer the call to go deeper,” said Claudia Boutote, senior vice president and publisher of HarperElixir.

Boutote and senior editor Libby Edelson kicked off the line with The Toltec Art of Life and Death by Don Miguel Ruiz, author of The New York Times bestseller The Four Agreements. They also published books by psychologist Carol S. Pearson and relationship expert Arielle Ford, as well as two adult coloring books by Lydia Hess.

The article focuses on books in the vein of Deepak Chopra, the sorts of authors with very broad appeal, as well as spirituality/psychology in a similar vein. I wonder about how this also applies specifically to Christian spirituality, both classics and modern takes. I'd imagine that it would have some affect, as people may seek out a host of traditions when trying to find what works best for them.


“Trust your feelings. Be mindful of your thoughts.” - Master Yoda

One of the most powerful tools of Ignatian spirituality is the Examen - a daily self-examination of the events of the day in order to detect God’s presence and discern His direction for you. Here are the steps of the Examen in a nutshell (feel free to read this in Obi Wan’s voice):

Become aware of God’s presence.
Review the day with gratitude.
Pay attention to your emotions.
Choose one feature of the day and pray from it.
Look toward tomorrow.

There are some fun parallels here. Both Jedi and those who journey through the Spiritual Exercises are called to a tremendous amount of mindfulness and self-awareness, which is what many of these boil down to.

Totally geeking out, part 2. Somebody made this: 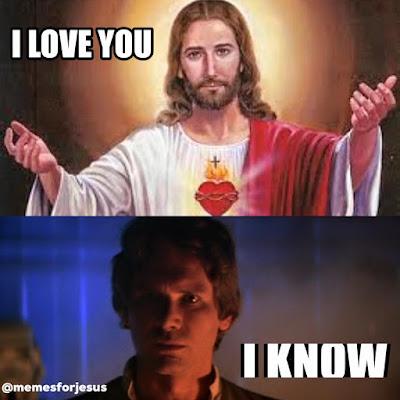 Totally geeking out, part 3. Usually hype videos for the new college football season start showing up on Youtube in mid-summer at the earliest, but one Michigan fan has gotten a head start by producing this video of footage synced up with one of the recent Star Wars trailers:


Is it September yet?


Foy held aloft his black leather Bible for another long ten second stretch of time. The room was quiet as a grave. No one cleared a throat or shifted in a pew. The silence throbbed in the air and seemed to be a presence itself, invisible and heavy.

Yes, this is a very dangerous book indeed. It is a seditious book. A radical book. A book authored by rogues, castaways, and ne’er-do-wells, convicts, foul-mouthed radicals, and other people the world had no use for. Most of them spent time in prison. Many were killed.

And every time you open this book and read it in this place you put your comfortable lives at considerable risk. For if ever the words and the Spirit of this book sank into your souls and found purchase, you would be FOREVER CHANGED.

Foy, the ex-priest, is back to preaching at least for a day. And his words are powerful, prophetic, mystical, and to the point. Atkinson's Foy stories are great at capturing the human experience, its search for God and wrestling with life. They always rank among his best offerings.

Misc. Jan on what churches do after Christmas Eve services are over. David Hayward on when control doesn't feel like control. Gordon Atkinson on seeking spiritual community after leaving the church. The Jesuit Post with another Jedi/Ignatius comparison, which is where the top image came from. 50 books for Christian readers being published in 2016.
By Jeff Nelson
Email ThisBlogThis!Share to TwitterShare to FacebookShare to Pinterest
Labels: Church, Justice Issues, Small Sips, Spirituality, Sports, United Church of Christ
Newer Post Older Post Home