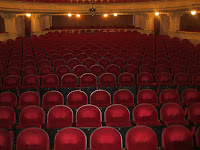 A few years ago, I met a novelist whose work has stuck with me ever since I first encountered it. When I heard they'd be speaking at a large denominational event I'd be attending, I made sure to pack my copy of the book that had touched me so deeply; that I pick up and read again every few years.

I remember the talk they gave. It was informative and thought-provoking; an interweaving of theology, science, and the daily struggle to be. I took copious notes that I still have in one of my Moleskines somewhere.

And I had to wonder how tired they and every other writer, artist, musician, and performer has become of it. Maybe some don't ever get tired. Maybe some feed off the energy and attention. But maybe some go through it because they have to, especially after a long day of traveling and speaking and giving themselves to others.

That afternoon, they dutifully wrote their name on the title page and handed it back. And then I started talking.

I talked about why I felt a connection to their work; the justification I had in my mind to dare this approach. They listened politely, nodding their head. How many different stories has this person heard? How different have they really been?

We both sensed that our few minutes together were ending and bade our goodbyes. I'm still thankful for that brief moment, when I could say directly to this person that I appreciated what they had done; that their writing had reached into and touched a part of my own soul.

That's all we're really looking for when we have a chance to meet such people, aren't we? Whenever I've been able to meet authors, band members, or athletes, I'm not looking to be their friend. I have no illusion that they'll remember me even an hour later.

All I want is a chance to say thank you. Thank you for what you've risked putting into the world, because it has changed how I view it; because what you did became a reference point for what was happening in my life during a particular season. You provided part of the soundtrack or commentary or background for who I was becoming, and I'm still becoming that because of what you shared of yourself.

That's all most people want in a moment like that. We crave connection if only for a few minutes, because they helped us connect with ourselves.
By Jeff Nelson
Email ThisBlogThis!Share to TwitterShare to FacebookShare to Pinterest
Labels: For No Particular Reason
Newer Post Older Post Home