Book Review: Until I Needed the Song by Steve Case 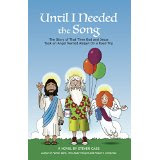 Pop culture has no shortage of attempts to depict God. The vast majority of them, particularly in comedies, go the easy route and just tap an actor to portray the divine in that classic human way that can be traced back through Renaissance art and the Bible itself. I think of roles such as Morgan Freeman in Bruce Almighty, George Burns in Oh God!, or the faceless old man on The Simpsons. A few years ago, the novel The Shack by William Young made waves not so much because it depicted God in human form, but because the particular form chosen was a black woman.

Many theologically astute types will be quick to explain why each of these images is limited and incorrect. God, after all, is so much bigger and difficult to discern than the "old bearded white man in the sky," much less Morgan Freeman. The cataphatic tradition that can be traced back to the church's earliest centuries declares that all images for God are ultimately wrong; they're too small to capture God's nature with any accuracy or true depth.

And yet, these images still have a place because they help tell a story. We wouldn't have the movies, TV episodes, and books mentioned above (much less large portions of the Bible) if their creators couldn't use images to help move things along. As I am often fond of saying, the truth at the heart of the story is more important than whether the facts are all correct.

All of that is to say that if you pick up Until I Needed the Song by Steve Case and get hung up on God as an old bearded man at the expense of the story, you're going to have a hard time with this book from the first page.

Case approaches his narrative by recalling the flannelboard Sunday School technique of old, where little paper images were stuck to a board covered in cloth while the teacher tells a story out of the Bible. To Steve's remembering, this occasionally included a figure representing God: the bearded man many of us have known. Case asks what would a story featuring these characters from a certain generation of church education look like; if they really were the accurate ones to work with?

His answer is a story about Abigail, who comes to heaven through "another way." We're clued in on that way at the beginning of the book, and it sets up much of what she wonders about throughout. God, frequently in stereotypical old man regalia, and Jesus, whom we're told prefers Amy Grant t-shirts, take a special interest in her and guide her through lessons on how God interacts with the world.

Each chapter serves as a sort of parable. One features Abigail watching as God spins a clay pot representing someone's life. Another features a road trip in an old beater car and singing with teenagers at a gas station. Each are fairly self-contained but build to the hard conversation that Abigail finally has with God about her life, of which we're given clues whenever she asks variations on the classic theodicy dilemma: if God is all-powerful and loving, why do bad things happen?

God's answer is usually human choice; that we create much of the misery that we and others experience ourselves. It's an answer that factors into the aforementioned climactic conversation, as well as when the story briefly focuses on another troubled young man who comes up "a different way." Case depicts God and humans in a partnership in creation: sometimes we listen and discern well, and sometimes we go our own way which doesn't always work out.

Case has written a thoughtful and amusing tale where someone finally gets to ask God some of the hardest faith questions humanity has been asking for centuries. The illustrations God and Jesus use are accessible, the imagery of their eating French toast and riding down the road is fun and harmless. And the heart underlying the entire narrative is undeniable. If you only focus on the surface details of how the story is told, you'll miss out on what it's trying to say.

(I was sent a free copy of this book to review by the Speakeasy blogging book review network. My opinions are my own. I am disclosing this in accordance with the Federal Trade Commission’s 16 CFR, Part 255.)