Extravagant Welcome and the "Spiritual But Not Religious" 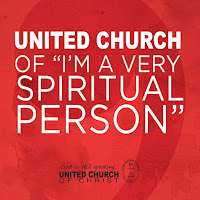 Last week I had a post appear on the UCC's New Sacred blog titled Stop Dismissing the "Spiritual But Not Religious." The basic gist was that there is a prevalent attitude in my denomination (and many other mainline traditions, as people would later point out to me) that people in this increasingly large religious identity group are lazy, entitled, narcissistic, hypocritical, and selfish.

In fact, I saw some of those exact words used in response to what I wrote. I thought that this proved my point. But many remain adamant that the "spiritual but not religious" (SBNR) aren't really all that interested in the rigorous side of spirituality, theology, prayer, or belonging to a faith community. They just slap this title on themselves to get out of a conversation.

Just like some people who identify as Christian--even among those who attend worship faithfully every week--might not be very interested in those things, either.

Believe it or not, I think that these characterizations do serve a purpose: they're cathartic. They help name the frustration that people within the church feel as they look out on a shifting religious landscape and wonder how we're going to carry on. They describe what seems to be an uphill battle to maintain a unique identity in an increasingly diverse and questioning culture.

I get that frustration because I feel it, too.

That said, imagine being an SBNR seeing yourself described as lazy, self-absorbed, or hypocritical. Would you be inspired to darken the door of a church if you thought a lot of people inside view you this way? Why would you bother?

No wonder many SBNRs prefer yoga, personal reading, or just plain sleeping in.

These characterizations are for insiders. They say that SBNRs aren't interested in serious inquiry like we are. SBNRs don't want community that will push them like we do. SBNRs don't ask the Real Questions like we would.

These stereotypes are cathartic, but they sure aren't evangelistic. They don't express "extravagant welcome," as my denomination is fond of placing on banners and bumper stickers. They stick an asterisk on the well-worn phrase, "No matter who you are or where you are on life's journey, you're welcome here."

One online discussion that I had about my New Sacred piece was with a man who agrees with these sorts of descriptions based on experience. He shared that he knows many people personally who use the phrase as an excuse to be lazy. They'll never be seen in a church, probably ever.

For every person like that, however, there are people like an SBNR friend with whom I had lunch the day after my post was published. She's been around the spiritual block, from the Friends tradition to dabbling in paganism to even a few years in the UCC. Her family hasn't found a fit, but it hasn't been without trying. In reference to my post she said, "Thank you for writing about people like me whom the church doesn't seem to want."

For the church this new moment in our culture is scary and frustrating and uncertain. It's good to have outlets to express all of that, but at some point we need to think about what involving people of this identity group might look like: sharing the good news as we know it, hearing the stories of others, inviting people to share their questions, engaging in new and different practices, and even risking our own worldview's expansion by what they share with us.

At some point churches have to pivot from the inside to the outside. There might not be a clear path out there, but the way forward calls for something more constructive than what we've come up with so far.
By Jeff Nelson
Email ThisBlogThis!Share to TwitterShare to FacebookShare to Pinterest
Labels: Church, New Sacred, Spirituality, United Church of Christ, Writing Elsewhere
Newer Post Older Post Home