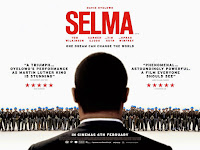 1. Season 6 of The Walking Dead ended this month, culminating in one of the moments I've been anticipating/dreading since I started reading the comics. Jeffrey Dean Morgan made his big debut as Negan, leader of a threatening group called The Saviors who terrorize other surviving communities. I saw all sorts of complaints online after the finale, which I don't think are as warranted as people think. The primary complaint was that Negan's first appearance includes a brutal killing of one of the longstanding characters, but the end scene shows it from the perspective of the character being killed so we don't actually know who it is. I can see why this is frustrating, but I also think the big reveal at the beginning of next season will help kick off the narrative: how the others react and respond to the threat of the Saviors in general. So I'm fine with it. This is still my favorite show.

2. I watched I Smile Back this month, starring Sarah Silverman as an upper-middle class wife and mother struggling with depression and addiction. I was interested in seeing this ever since I first saw a preview for it last year. Silverman gives a powerful, committed performance, and I found myself taking on the point of view of the husband trying to support her while also looking out for his children. His portrayal of frustration and concern is nearly as palpable as Silverman is in her role. The film leaves things very open-ended, if not a little unsatisfying. I understand why the people behind the film made that choice, but it made for a pretty painful progression as Silverman's character dug herself deeper and deeper.

3. I also watched Selma this month, which portrays the piece of the civil rights movement that advocated for voting rights in Alabama. We see Martin Luther King, Jr. having multiple meetings with President Lyndon Johnson, with both struggling with what their role is at various points. We also see white people vacillate between hate-filled violence and fear-based calls for politeness and patience in response, both with their roots in the same wish for the status quo not to be disrupted. There are echoes of current tensions all over this movie, which gives this (and many of MLK's writings) a timeless quality. Both as drama and as historical narrative, I thought it was very well-done.

4. I picked up the newest album by Weezer this month, their fourth self-titled album that fans have already dubbed the "white album." It features the same California rock sound that many are used to from this band. It's not necessarily new ground for them, but I enjoyed it regardless. Here's a favorite track, "King of the World:"

5. I also heard Phase by Jack Garratt this month. His song "Worry" is on regular rotation on the community radio station I listen to, and it was enough to get me to take in the whole thing. Garratt's work is chill/electronic with a taste of rock sprinkled in, making for a lot of smooth, reflective cuts with driving grooves. It's the type of music you'd put on while waking up with coffee or winding down with wine. Here's the aforementioned track, "Worry:"