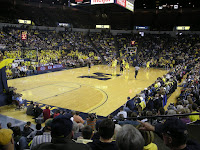 This Still Works. March Madness is over, but this article by Ken Carter still makes some important and needed points about the church's decreased "home court advantage," even if he's a Duke fan:


I thought about this context recently in reflecting on the changing relationship of the Christian Church to the postmodern world. Years ago I read an essay written by the missiologist George Hunter entitled “The End of The Home Field Advantage” (Epworth Review, May, 1992). The thesis of his article was that a privileged Christendom had ended, and that practicing Christians lived in a very different context. Twenty-four years later, this insight is increasingly true.

These I call our self-inflicted wounds, and they are real.

With Easter just passed, illusions of Christians still having a home court advantage were on display as churches enjoyed some extra visitors. With many having family in town or people feeling an obligation to attend based on some latent sense that "it's just what you do," the pull that Christianity has on American culture is still present, though waning.

When your belief system is no longer the dominant narrative that society assumes, there comes a time of growing pains and uncertainty. And we've seen plenty of examples of how some aren't reacting to it well.

The help you need from the people who can give it. Aaron Smith shares why he doesn't go to pastors for help with mental illness:


I have learned not to go to pastors with my issues, not because I don’t trust them or they are bad people, but rather because they are the wrong people to help.

It took me a long time to be ok with seeing a therapist. Growing up, I was always told that unless it was specifically a “Christian counselor”, psychologists would lead me away from my faith and into some new age mumbo jumbo. And Psychiatrists? Forget it. They were worse. With this in mind, I steered clear of therapy for 28 years until finally I had to admit that I needed more help than I could find in the Bible or my local church.

So I went to therapy, and was diagnosed, and started a treatment of medicine and talk therapy to help me lean into a healthy life. I haven’t been led away from my faith or anything I used to fear about therapy. Instead, I am finding stability from my mood swings, healing from my broken heart, and a new way of thinking about myself, a healthier way of embracing myself. Ya, I’m on a few medications these days, but the medicine is helping me, not turning me into either an emotionless zombie or a happy clappy freak. I am finding out what it means to be healthy.

It is very easy for people to view pastors as free therapists. I've experienced it more than once. But the fact is that we aren't trained to handle these sorts of issues. We can't diagnose or prescribe, let alone offer advice on how to manage the disorder you're struggling with. We can listen, pray, refer. We can be part of a team that includes a proper counselor among others to help care for you holistically.

But clergy and those seeking care alike need to recognize what we are and are not capable of providing.

Important. On Palm Sunday a live TV special entitled The Passion aired, attempting to recount the story of Jesus' final hours using modern music and celebrities. A lot of colleagues didn't really like it, but a lot of non-clergy, non-academic types loved it. And Candace suggests that gulf is worth some reflection:


Friends. We cannot keep invoking our nanas and our beloved church family in our work if we do not labor to really hear what they feel. It’s hard. Because I’ve done this myself. For me, it is a struggle. It is possible to dislike something without pooing on the folks who love it. It is possible to be underwhelmed by something and still take time to hear how and why it resonates with the people we love.

In fact, that’s good information for church leaders and seminary-adjacent folks. Did we ever ask people why they liked this? Before we smacked folks up the head with links to books and videos of our favorite theologians, did we ask them what attracted them to THIS story? (I’m telling on myself here.) Those might tell us something about what WE missed.

There’s a pretty stark divide among the “Hated it” and “Loved it” crowd. It’s concerning. It tells me that whatever we learned in seminary is not exactly finding its way to the spaces that matter. This experience taught me that there has to be something other than thinkpiece-smack-and-tag culture. Where are the spaces of popular education in our churches? We are failing at meaning-making in community. We are not providing places to “rereading for liberation” as Dr. Renita Weems might argue.

I was of two minds about this production. I had a "Hated it" and "Loved it" side duking it out within myself. On the one hand, yeah, parts of it were bothersome and theologically questionable. Two quick examples: Mary (Trisha Yearwood) singing a bunch of "I Don't Know How to Love Him" type songs as if that's the only way she's portrayed in the Gospels (Magnificat was more like a punk song than a pop ballad), and the disciples having the last supper by passing around a bottle and food truck snacks rather than during a Passover meal.

On the other hand, I saw and appreciated what they were trying to do overall. I still have a soft spot for using pop culture to find new ways to tell old stories. I liked parts of my evangelical years and have held onto some of the creativity and adaptability that it tends to show way more often than progressive mainliners do (though thankfully that's finally changing). And I knew that when I'd log onto Facebook after the show was over I'd see praise for this telling from church members because it spoke to them in ways that curmudgeonly academics seldom do.

There is indeed a gulf. How do we bridge it?

Persecution for privileged people. Neil Carter reflects on the newest evangelical Christian film just released, God's Not Dead 2: Dead Harder.* In particular, he has a theory as to why American Christians love the persecution narrative so much:


Evidently it was a problem from the very beginning, even in Peter’s day, that Christians wanted to pride themselves in how badly they were disliked. Evidently this has been a thing since the very inception of this religion. I see that not a lot has changed, except that now they are living in a country tailor-made to accommodate their religious freedoms.

And yet they are still not satisfied. They want more. They want things to be the way they used to be, back when they could say and do virtually anything they wanted to without worrying that it disadvantages other people who believe differently from them. Now they feel put out by the fact that even though they make up the overwhelming majority of Americans (doubly so in places like Arkansas), somehow they are being mistreated by having to let other people occupy the same space.

This newer way, the way of a more consistent religious pluralism, isn’t nearly as fun. In fact, it sucks. To them it feels like persecution. But in reality that’s just the way it feels to lose a little bit of the privilege you’ve always taken for granted.

Carter offers several possibilities for why Christians in this country flock to these stories. First is the above: they mistake increased pluralism and respect for non-Christian beliefs for persecution. Ours is becoming less and less the dominant system (see the "home court advantage" article), so making space for other voices feels like oppression.

Second, Carter offers the possibility that because persecution and martyrdom is woven into Christianity's earliest years (beginning with Jesus' crucifixion), that this is the way it has to be. So any sign of such actions taken against Christians--even badly told ones like this movie--feels like faithfulness.

For me, I actually don't think the second explanation goes far enough. Christians in places like the Middle East and China are a truly (and at times violently) oppressed minority. American Christians have no idea what that's like due to the privileges we've always had. So any chance to complain about Wal-Mart greeters not saying "Merry Christmas" or any fabricated email forward about a college freshman who stands up to an evil atheist philosophy professor helps assuage a felt need to suffer for one's faith without any actual suffering. It's a persecution narrative told from a safe, comfortable place where nothing bad has really happened. This way of fulfilling a need is bloodless, and I'm betting a lot of people prefer it that way.

*May not be the actual subtitle.

Thank you, internet. I just discovered this video yesterday. Coffeeson and I both think it's hilarious:

Misc. Theological schools are getting creative in order to stay afloat. Jan Edmiston on what's really going on in a pastoral situation. April 5th was the 6th anniversary of Michael Spencer's death, so they're running tributes to him at Internet Monk this week.
By Jeff Nelson
Email ThisBlogThis!Share to TwitterShare to FacebookShare to Pinterest
Labels: Church, Ministry, Posts That Prove How Sick I Am, Small Sips, Sports, Theology
Newer Post Older Post Home