The Festival of Faith and Writing 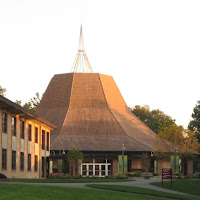 Last week I attended the Festival of Faith and Writing at Calvin College in Grand Rapids. I'd been meaning to attend ever since I first heard about it a few years ago, and this was my first opportunity to go.

The first thing I have to share is that Grand Rapids is a great city and Calvin has a beautiful campus. This was my second trip to Grand Rapids and I've been struck both times by its waterside views. And I didn't look anything up regarding their age, but the college and adjacent seminary have a modern-meets-classic feel to them that, when coupled with its sprawling greenspace, made for an excellent and inspiring setting for writers and readers to gather.

My own time at the Festival was abbreviated. I arrived Thursday in time for the afternoon sessions, the first of which I attended was a panel discussion on how poetry can inform how we compose liturgy. The three poets comprising the panel were all Eastern Orthodox, and had great insight into the differences and similarities between the two forms. A few spoke of words in poetry being more opaque and inviting an experience of the words themselves, while words in liturgy being more transparent for us to see through them toward the larger reality to which they point. I found the conversation fascinating, and a good introduction to what I'd be in for.

This panel would also be important for me because it served as my introduction to the work of Scott Cairns. During this session he read his poem "Annunciation," which just floored me. On Friday I attended a reading of his poems and his spiritual memoir, which was the only session where I simply opted to listen rather than take notes. He was available for a signing afterward, where I purchased and had him sign a copy of the memoir. Making this discovery was one of the highlights of the festival for me.

I also attended a reading by Saladin Ahmed, a science fiction novelist who discussed how his Muslim faith influences his writing. The excerpt he read from the book, set in an alternate universe after a civil war, was reminiscent of Firefly for me, so I purchased a copy of his book as well. Believe it or not, this along with two of Cairns' books was the extent of my book buying. I was very restrained. You should be proud.

The other most notable session for me was one on the state of blogging, which saw an overflowing standing-room-only crowd. Four panelists discussed their experiences with blogging: they all had mostly positive things to say about it, although at least one discussed her eventual decision to walk away from it after she realized how much time and energy writing for blogs took away from her book work. I understood that, and it was helpful to hear such a perspective.

Aside from the sessions, I connected with both familiar and new friends and colleagues and had some great conversations with fellow attendees about books, writing, promoting, ministry, family, and more.

Just as important was my staying with my best friend from college, which was as refreshing and fun as the festival itself. We listened to music, drank home-brewed beer, and talked all manner of pop culture, religion, parenthood, careers, and generally caught up. We even had an opportunity to tag along to one publishing house's after-hours wine and cheese party thanks to one employee being a student of his.

I had to drive back on Saturday, so I missed a full day of activity. But what I did experience was enough to convince me to make plans for the Festival in 2018, and to stay for the entire gathering. It was restful despite the packed schedule and inspiring for me as a blogger and author. I hope to be back for the next one.
By Jeff Nelson
Email ThisBlogThis!Share to TwitterShare to FacebookShare to Pinterest
Labels: Blogging, Quotidian, Writing
Newer Post Older Post Home