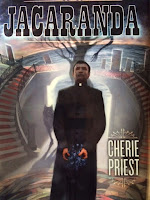 1. The second season of Unbreakable Kimmy Schmidt released on Netflix in April, and we finally sat down to slowly binge our way through it this month. Kimmy continues her adjustment to life after being trapped in the bunker, this time around finally visiting a therapist whom she finds through unconventional means. Her friends Titus, Lillian, and Jacqueline also get into misadventures of their own, including finding love, protesting the hipsterization of the neighborhood, and trying to maintain her high society status, respectively. But the main story is Kimmy's finally reconciling with her feelings about the bunker, which of course play out in sometimes ridiculous ways. But the wackier moments of this show are always grounded in a warmth that help the viewer care about the characters beyond whatever silly thing they end up doing next.

2. I read When Breath Becomes Air by Paul Kalanithi this month. Kalanithi was a neurological surgeon who, in his mid-30s, was diagnosed with terminal lung cancer. He decided to write about his experience going through the process of receiving treatment and preparing for death. The first section is his preparation to become a doctor, with aspirations and life ahead of him. The second is his life post-diagnosis, where he wrestles with identity, vocation, and quality of life issues. The epilogue is written by his wife Lucy, who beautifully describes Paul's final weeks before his death, and the love that he both showed and was shown during that time of farewell. This book doesn't romanticize or dramatize death, nor is it a simple encouragement to "make the most of your life." It simply describes how the specter of terminal illness changed a person's life, and what he did to manage through it. I found it incredibly well-written and thought-provoking, and I'd highly recommend it.

3. I also read Ex-Patriots by Peter Clines this month, the second in his series about superheroes helping organize survivors in Los Angeles after the zombie apocalypse. This installment features the heroes' discovery of a military base of fellow survivors led by a group of genetically enhanced super soldiers. The two groups explore how to work together, but there are also mysterious elements not quite on the up and up with the LA group's new friends. I liked Clines expanding his universe a little this time around. These books have been fun, light reading; I look forward to continuing the series.

4. I also read Jacaranda by Cherie Priest, a novella set in her Clockwork Century universe about a strange hotel where many guests die under mysterious and gruesome circumstances. Father Juan Miguel Quintero Rios is invited to help investigate, along with Texas Ranger Horatio Korman, a familiar figure to Clockwork Century readers. This book pivots from the usual stories of steampunk machines and zombies to more of a straight up horror story, and much like Clines' series isn't the heaviest fare (I finished it in a day). But any story revisiting this world and these characters is bound to get my attention.

5. This month Phantogram announced that they're releasing a new album in September simply titled Three. Along with this announcement came the release of the first single, "You Don't Get Me High Anymore." I loved their previous album Voices, and was surprised and excited when I heard both the news and the new song. Here's the lyric video: