To Life - A Pastoral Response to the PULSE Murders 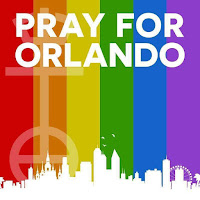 I've been wanting to write something about the Orlando shootings, but I don't think that my voice is the correct one for people to hear in this particular case. So I asked my good friend and pastoral colleague the Rev. George Miller to share some of his thoughts instead. With permission, this has been reposted from his blog, where it originally appeared the morning after it happened.

Statistically speaking, we are living in the safest time in human history...ever. But when mass violence takes place we become full of fear.

Right now a 1,000 voices are saying 10,000 things about an event not many people fully know enough facts about.

Again, I find myself numb and unsurprised. Partly, because I'm the son of a NYC cop and have always known these things can always when one is in public. Partly, because I'm a gay man who came out in 1991 at a time when "gay-bashing" was real and we all knew people who were attacked entering, leaving or at a nightclub.

For better or for worse, these two realities (being a cop's son and an openly gay man) have informed my perception of reality- that I or my friends can easily be hurt for being who we are or who we are with.

This is why you see me smile when I'm out and about, or why I am quick to raise a glass in cheers- it's not because I'm oblivious or intoxicated- it is a cheers to light and to life, and to the awareness that I could not live as I live or be who I am if it was 1950, 1960, 1970 or even 1980, or if I was living in an other country. It's also the knowledge that since I have a diverse radius of friends, many of them may not be welcomed for a variety of reasons.

I don't know who entered into the nightclub Pulse (and please know- it is a gay club), and the reasons as to why he felt the need to kill, and wound, and hold hostage all those people.

I don't know what his religious beliefs were and were not, or if there were issues of mental illness or personality disorder, or jealousy, or unexpressed rage that was boiling over.

I worry that people and the media are quick to make assumptions, to point fingers, to take sides, to make demonic one group of people, to think they have all the answers when it comes to guns or rights or morality.

All I know is that a tragedy happened really close to home. So close are all of us are probably associated to a victim, survivor or perpetrator by 1-3 degrees.

People are scared. People are confused. People are worried. A Facebook page has already been established, so people in Orlando can check off that they are alright so their Facebook friends can know they are ok. It appears that everyone I know in Orlando was far from the scene.

Now, people wonder what to do. Light a candle? Hold a prayer service? Give blood? Go out and rough house a Muslim? Say the gays got what they deserve? Claim this is an act of judgement from God?

I know what I will do- keep on living. Keep on going out with my friends. Keep on attending public functions. Keep on lifting up a glass of wine in celebration of life. Keep on connecting with God.

Keep on giving thanks that we belong to a church and a denomination that tries our best to welcome, to not judge, to not condemn.

To keep celebrating the gift of grace that comes from our faith in Christ; grace that says because God loves me, I am free to love and to be loved. That because of grace we don't have to be so quick to judge, to be filled with hate, to purposely want to hurt another.

Why would anyone go into any club or public place and want to kill anyone?

I don't know, but I do know that our fear means they won. And I don't want them to have that power over me or anyone else.

So today, whatever you do, find a minute, a moment, a second to give thanks for what you have, for who you are, and find a way to embrace life, even if it is as simple as saying thanks to God, watering your flowers, calling a family member or friend, or having an extra glass of wine.

This is not the last time an event like this will take place.

But remember, God (as experienced in the Father, Son, and Holy Spirit) is eternal and will always have the last say.