Vintage CC: The Complexity of Help 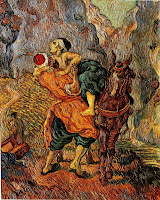 I wrote this in July 2013. I'm still wrestling with the main issues it raises. The church is certainly called to help others, but there can be a lot of factors involved that prevent it from doing so in a one-size-fits-all, idealistic way. We can wish that it was otherwise, but reality prevents that.

Maybe I've become a little jaded based on experience. And maybe I sound a bit like an institutional apologist. But I've learned that giving help can be more complicated and take more discernment than some realize. It's not that we shouldn't give help; we are very much called to help others. But the nature of that help may not be what we think it is on the surface, and it may not be within our means alone to give.
By Jeff Nelson
Email ThisBlogThis!Share to TwitterShare to FacebookShare to Pinterest
Labels: Vintage CC
Newer Post Older Post Home