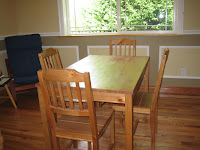 I pull into the garage, the late afternoon heat immediately welcoming me home as I step out of the car. It's been a long, surprisingly full day at the church including a lesson plan to write, a sermon to practice, several phone calls to folks I hadn't seen in a while, and a few hours at the local assisted living place where a handful of my parishioners reside. I'm ready to relax, to get out of my dress clothes and await the arrival of my family.

The door's hinge squeaks as I trumble into the house, leather work bag bumping the frame as I enter. How long had that squeak been there, exactly? Do we have DW-40 anywhere? I could look after changing. Also, the kitchen light is on. I usually turn that off when I leave. I guess I forgot this time...

I stop as I enter the kitchen. He sits at the table hunched over a mug. Without much movement, his eyes meet mine. His tie hangs loose as mine does, his glasses perched on top of his head as mine often do when I'm in deep thought.

My mind races with what to say. I let my bag drop to the floor to buy a few seconds. One of the cats starts to rub against my leg.

He leans back in his chair, the wood filling the air with creaks and groans. His lock on my eyes doesn't falter, nor does his stoic expression. He folds his hands in his lap and raises an eyebrow, daring me ask the obvious.

The silence lingers another few seconds. He's the one to end it.

I move my bag away from the doorway as the cat scurries to avoid it. She goes to my other leg instead, though her new plan is disrupted by my taking a few steps further into the room.

"I made a fresh pot if you want some."

I nod before a wary walk over to grab a mug and pour my own. He elects to look back down at his own as I do this. We've both chosen red cups today.

I lean against the counter behind him as steam billows from my cup. I try not to look at him. He's still facing forward.

"You gonna sit down?"

I take more air in my lungs than I need and let it slowly escape. I pull back the chair closest to him and sit, the wood loudly responding to my shifting. I feel him watching me as I settle in. He takes a sip as he waits.

And again, silence. The cat sits on the floor beside me, purring. I'd rather look at her, but I force myself to face my guest instead. His eyebrow goes up again as his features soften.

"I didn't mean to startle you earlier. But we have some things to talk about."

The coffee is still too hot to drink, so I break my gaze to scratch the cat's head. My visitor folds his arms. He's glaring when I turn back.

"I'm not avoiding anything."

"I get that this isn't what you had in mind today, but you need to deal with it. Might as well do it now."

"So, you know what I'm talking about, then."

He leans forward. "Tell me more about things being fine. Tell me about how you've been outsourcing your best stuff for the past year."

My cheeks start to get hot but I stay back in my seat. "If that's what you really think, you haven't been paying attention. That Lord's Prayer thing I wrote last month? People loved that. One of my most-viewed pieces ever."

"That one about church envy? The denomination's Facebook page picked that one up. Hundreds of hits. You came all this way to chew me out for no reason."

I see his jaw clench. "I'm not here to chew you out. I'm here to point out what you don't seem to get."

I lean forward, almost spilling my drink. "Well, how about spelling it out for me? This is my house, not the principal's office."

He sighs. "Fine." His forearms rest on the table.

"You've been phoning it in for months. Relying on those ones where you link to a bunch of other posts and drudging up stuff you wrote years ago. You obsess more about what books you're reading and movies you're watching than coming up with original new ideas, and the few you do actually bother with get sent out to other places. We're lucky if you write something that isn't one of those cheap pieces of filler or a damn book review more than once a month. It's embarrassing and to be honest I don't know why anyone bothers visiting any more."

He holds my gaze for a few more beats before reaching for his cup. I wait to see whether he's really finished.

My own cup is finally cooled enough to drink. I raise it to my lips. "Well, don't hold back."

"Stop being a smartass. You know I'm right."

"Yeah, I guess. But maybe this isn't the be-all end-all any more. Maybe it never was."

His eyes harden. "What are you talking about?"

"I'm lining up guest gigs all over the place. People see my stuff on these other sites and they've probably never heard of my own. But they're reading, aren't they? So why are you mad about that?"

"Because you used to pour your heart into your own space, and now you don't seem to care."

"It's been almost twelve years. You expect things to stay the same forever?"

He leans back, suddenly looking very confident. "You know what really changed things?"

"It was the book. The book changed it all."

I can't sit down any more. I bump the table and coffee splashes over the lip of my cup. I take a few steps back toward the door, rubbing my chin to collect myself.

I turn back toward him. "Okay, so what? Want me to be more like how other authors write for their sites? Maybe, what, a few times a month at best? I was churning out long thoughtful stuff like that before anybody noticed or cared. This was always the goal. Always the dream. I've been hoping and working for this for a decade and you're suddenly nostalgic. Good Lord."

"I just don't think you've been giving this your all."

"And I think you want to go back to something that wasn't working as well as you thought, and you don't really see how I'm doing it now. I've transcended. You should be happy."

"You are obviously not--"

"I'm happy about that, but you're sacrificing something else."

"Things were bound to start changing. You had to have seen this coming."

"Yeah, well, maybe we should let things play out."

"Sure. You're obviously not as concerned about this as me, so maybe I shouldn't have bothered."

"Guess not. Thanks for making coffee, though. I hate microwaving the old stuff."

He just stares for a moment before slowly getting up. He dumps the remnants of his cup in the sink and sets his mug on the counter. I step to the side to allow him passage. He stops right next to me, facing straight ahead.

"I bet you won't like where this goes as much as you think."

I look down at the cat, who has returned to my leg. "Neither of us knows that."

He walks toward the door and disappears. I remember the mess on the table and reach for some paper towels to wipe it up.
By Jeff Nelson
Email ThisBlogThis!Share to TwitterShare to FacebookShare to Pinterest
Labels: Blogging, My Journey (so far), Writing
Newer Post Older Post Home