Small Sips Says It Without Saying It

Nothing new, but still important. John O'Keefe confesses several things that he feels or experiences as a pastor:


In many [not all] of the churches I’ve served, I’ve felt alone. It’s a weird feeling; I can stand in front of 200-500 people each Sunday, speak, and share, and walk away from that experience feeling alone – and it hurts. Like everyone else, I’m looking to develop deep, honest, open, lasting relationship with those around me. I’ve always felt sad knowing I’m your Pastor, but you don’t want to get to know me; but you expect me to know every detail about the lives of 500+ people – and to be honest with you, I have a hard time just remembering names.

This isn't really a ground-breaking article, but I think that these sorts of sharings bear repeating from time to time as a reminder of the unique challenges that pastors face, including pressure to succeed amid volunteers who expect results but aren't always quick to offer assistance or resources, and the loneliness of fulfilling a particular role among a relatively large group of people where you're a part of them, but also not.

Whose problem is this, really? Mark Wingfield shares the greatest challenge many pastors will face in 2017:

It is the politicians today who have made biblical issues political issues — and too often erring on the side that opposes the Bible’s teaching. We don’t ask politicians to be theologians, after all.

When your pastor preaches against the prosperity gospel — one of our greatest modern heresies that defies the example of Jesus himself — that is only a statement against the president-elect because of the choices he has made — inviting a prosperity gospel evangelist to pray at the inauguration, for example, or advocating wealth over character and service. What will you hear?

When your pastor preaches the biblical mandate to welcome the stranger and care for refugees, that is only a statement against the president-elect because he made a campaign issue out of building walls and sending people away. What will you hear?

I've seen other articles similar to this, where the very act of preaching on particular issues straight from scripture could lead to blowback because it will seem like an anti-Trump sermon for the simple reason that it runs contrary to something he has said or wants to do. One doesn't even need to mention his name to accomplish this.

It will in one sense be a challenge. But in another sense, it will be more of a challenge for hearers than for preachers because it will require them to reconcile what the Bible actually says with the Christo-political worldview that millions of Christians have created in order to support certain government practices.

Oh good, another one of these. David Brubaker offers some tips to churches on how to repel millennials:


The stark reality that many congregations in this country now face is that some of the very things that repel Millennials have proven attractive to older Baby Boomers and members of the Silent Generation (who still provide the bulk of congregational funding). Even though support for gay marriage among the Boomers and Silents has been increasing, for example, it is well below 50% for both generations. And climate change denial is much more pronounced among our elders than our youth. To keep Millennials away, all we have to do is keep up the good work we already are doing!

But for congregational leaders who envision Millennials as part of the congregation’s future, a different stance will be needed. I believe that the primary adaptive challenge for congregational leaders in the next decade will be to navigate the transition from positions established by the generations that are passing away (Baby Boomers and the Silent Generation) to the generations that are upcoming (Gen X and Millennials). Leaders will have to manage this transition in ways that are congruent with the deepest values and beliefs of their tradition. Fortunately, respect for the dignity of all human beings and care for God’s creation are two very well established principles in multiple religious traditions.

The whole thing offers a numbered list of specific things that repel Millennials, but the above quoted portion seems to sum things up pretty well. Most churches are still largely run by older generations who view the world and church administration/practice in certain ways that hold little to no meaning for people in younger generations. Moving forward will require some stepping back and allowing other ideas and viewpoints to be considered and implemented.

Saving this for later. A couple friends have been using this as their profile picture on Facebook. Maybe it will come in handy for you in times like these. 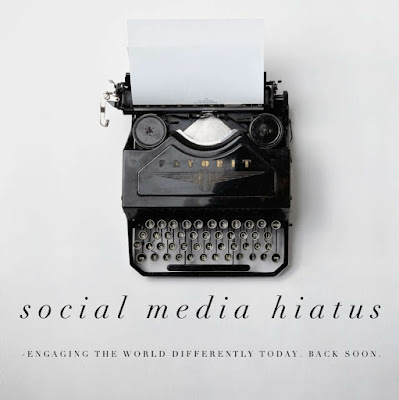 There are other (and more effective, and maybe more sane-keeping) ways of engaging besides social media.

Misc. Jan Edmiston on how we can still be a global church even if our nation decides not to be. Rocky Supinger wants less wishful thinking in our political environment. Gordon Atkinson with a story about what might be next.
By Jeff Nelson
Email ThisBlogThis!Share to TwitterShare to FacebookShare to Pinterest
Labels: Church, Ministry, Politics, Small Sips
Newer Post Older Post Home