Go Ahead and Give Up Chocolate for Lent 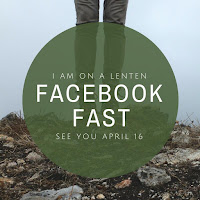 I'll also work my way through a devotional book and engage in daily prayer, but I felt inspired this year to refrain from the two donut runs I make on the weekend, the two cinnamon crunch bagels I eat every week, the Girl Scout cookies and Easter candy that will soon appear in my house, the late-night ice cream, and the rest.

I realized how compulsive I've been about indulging in this lately, so Lent has provided a good opportunity to go without for a while.

Others I know are doing something similar: chocolate, soda, Facebook, alcohol. It's a fairly traditional practice that many are observing in their own way and according to their own sense of what might be best.

Unfortunately, it's been the trendy thing the past few years to write pieces criticizing those who "give up" something for Lent. In the eyes of these critics of the practice, Lent has become a self-improvement plan, a "second New Year's," as I've seen one commentator put it. If cutting back on sugar didn't work for you in January, go ahead and give it another go leading up to Easter.

A second criticism that has become popular is to point out how you don't really suffer or grow closer to God by giving up donuts or social media. Doing so is a mark of privilege, and you're not really going to learn anything by refraining from such a paltry little act of piety.

Sometimes these articles stop short of offering alternatives. Many writers think they've done their Godly duty simply by offering their snarkiest and most self-important take on what the unenlightened rabble are doing. Others do give some solutions, such as taking on a daily spiritual discipline or engaging in acts of charity, justice, or peacemaking instead, or trying to give up something more intangible like fear or anger (as if you can give up feeling a certain way for 40 days). Some of these that offer something constructive can be helpful, but mileage varies.

By all means, try your hand at observing something like daily lectio divina or regular service at a local agency. "Taking on" a practice like these would certainly be worthwhile and will aid in your relationship to God. I've done this myself more than one Lenten season over the years. Or take a shot at giving up existential dread rather than cake, if you think you can.

But I think there's still a lot to be said in favor of refraining from things like Oreos during Lent.

If there's one thing I recognize about myself, it's that I turn to certain foods for comfort when I'm feeling stressed out. Sugary snacks are one of my go-to coping mechanisms when my spirit is feeling twisted and pulled and out of alignment.

In multiple ways, this is not healthy. Eating enough of these foods can certainly affect me physically, mentally, and spiritually.

Think about the person who can't believe they could get by without their nightly glass of wine. Or the person who checks their phone 20 times a day at the expense of actual human interaction. Something in their brain is telling them that they can't not do this; they need to because life is hard for them right now or they're feeling anxious about something at work or it just helps them get through the day.

So what if, for 40 days, they put these things down? How easy do you really think it will be for them when these familiar methods of coping are no longer available?

Ignatius of Loyola had a term for stuff like this: "disordered attachment." When we have an obsessive relationship with something other than God, when we feel so attached to some activity even as supposedly trivial as eating certain foods, drinking certain drinks, or checking certain websites, that can negatively affect our relationship with God, others, and ourselves.

So for a lot of people, there's still a lot to be gained by giving up chocolate or soda or Twitter.

What if, instead of criticizing them, you prayed for them instead?
By Jeff Nelson
Email ThisBlogThis!Share to TwitterShare to FacebookShare to Pinterest
Labels: Lent/Easter, Spirituality
Newer Post Older Post Home