So. What you gonna do? John Stoehr suggests that this political moment in America is presenting progressive Christians with an opportunity, if they want it:


It's unclear whether Christian conservatives know the price they have paid. By going all-in with Trump, they have seriously undermined, perhaps bankrupted, their moral authority. The movement's big wheels are scrambling to contain dissent bubbling up from their ranks, from young evangelicals appalled by the older generation's attempts to rationalize Trump's corruption, views of immigrants and his endless, breathless lying.

Allowing the Christian right to crash on its own might seem like a victory for liberals, but it's not. The Christian right could limp along for years if allowed to. Liberals need to recognize this moment as an opportunity. The right's former moral authority must be supplanted by a new moral authority, one equally rooted in religion. But how can liberals, especially white liberals with an allergy to Jesus-speak, take a stand on the principles of Jesus?

After decades of claiming to be the definitive Christian voice in America, the Religious Right really revealed itself during this last election. They had many times before then, but perhaps not with such a stark, bald-faced show of hunger for power at the expense of what Jesus stood for. Many in that camp are trying to cover themselves by claiming that God often worked through "imperfect" people in the Bible, but there's never any call for repentance or accountability. And that shows that what they really like is having a guy who will advance their agenda, that person's character notwithstanding.

Liberal Christians' problem is a hesitancy to talk too much about their beliefs, which I actually see changing. Sure, back when I was in seminary it seemed as if people tried to bend over backwards to offer up the most lukewarm, vague theological claims in the name of inclusivity, but Jesus was inclusive. That's still the guy we base our faith on, last I checked. And now the Christian Left (or whatever term you prefer) has a chance to show more of what Jesus was really about.

Again, if they want it.

Help us out, Jesus. If you're like me, you can only take logging onto your go-to news site for so long nowadays before wanting to punch someone. Susan Sparks has a way to navigate reading the news that might save you a trip to the cardiologist:


So, here’s my new approach: I’ve now started keeping two to-do lists — mine and Jesus’. Every morning, I look at my list and think, “Which of these things involves bailing out the boat?” Those items stay on my list. Then I ask, “Which of these involves calming the storm?” And those things get moved from my list to his.

Let me give you an example. If you are facing a medical issue, your to-do list should include things that you can do — that you can control — like going to the doctor, taking your meds, going to tests or treatments (bailing out the boat). Jesus’ list should contain things that that you can’t do, or that you don’t do very well, like calm the storm of anxieties about the future.

I've been doing a variation on this for a while. The idea for it came from something I read that I've now forgotten, but the basic gist is that when I find myself becoming anxious about something, I breathe and say, "I need to give this to God." The very phrase starts to help me feel more relaxed and centered, and I've turned to it many times in recent years.

You might be able to help steer the boat, but you can't do much about the storm. The latter is for Jesus. The problem is that we often get these two to-do lists confused. Or at least I know I do.

New choice, same as the old choice. Karl Vaters says that older generations in the church have a choice to make:


We can either whine about how the new generation chooses to worship, or we can worship and minister with them. But we can’t do both.

Don’t we remember when churchgoers in our parents’ generation complained about the length, color or poofiness of our hair? Or the rolled-up sleeves and lack of a tie on our pastel-colored Miami Vice suit? Not to mention that we replaced some of their beloved hymns with our new praise songs, sung with guitars, not organs?

Have we forgotten how devalued we felt when they told us our music was too loud, our clothing looked silly, our questions were inappropriate and our opinions were wrong? It didn’t make us want to worship their way. It made us want to leave the church. And many of us did – never to return.

How well those groups take to each other, and specifically what the older side of the equation chooses to do, will help determine our future.

For instance. Edie Gross reports on Church of the Pilgrims in Washington, D.C., which has made big changes in worship to make it more participatory:


“The big shift was from the passive to the participatory,” Krehbiel said. “How do we take worship from something we watch to something we do?”

That’s a question many congregations wrestle with, said the Rev. Susan A. Blain, the minister for faith formation and curator for worship and liturgical arts for the United Church of Christ. An authority on worship, Blain has helped Goff brainstorm about liturgical creativity and is familiar with the changes at Pilgrims. Having laity play a more active role in worship requires courage and commitment from clergy, who must yield some control in order to create a safe environment where the congregation is willing to share what’s happening in their lives, she said.

“You begin to move away from this passive notion that worship is something that’s received,” Blain said. “It’s not a pastor declaiming something up front. It’s a pastor in the middle of everybody, encouraging whatever the response is, whatever the spirit is.”

Imagine if even a few of the things mentioned in this piece--removing pews to be more in the round, having people share their testimonies--were done where you worship. Instead of everyone facing forward taking in (or ignoring) the presentation in front of them, they have a more active part to play. They have ownership of what is happening. Which is what liturgy (which means "work of the people") is meant to be.

My post in picture form. On Monday I wrote about how the practice of "giving up" something for Lent can still be helpful and good. This cartoon sums it up much more simply: 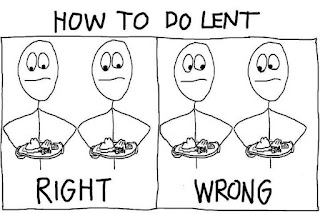 Misc. Elsa Cook on Lady Gaga and activism. Jan Edmiston on how the church could react to the "sonic booms" of the culture. Dan Reiland on the best church growth strategy, which is not about church growth. Gordon Atkinson has retired his Tertium Squid blog, but will keep writing.