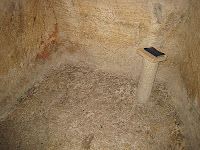 This post comes from March 2012 while I was being guided through the Spiritual Exercises. One meditation that I was invited to observe was to get up sometime in the middle of the night and spend an hour imagining being with Jesus in his prison cell. This is my recounting of that experience. Close to five years later, I'm still haunted by its revelations.

At first, it is as if I am looking in at the scene from afar. I am hesitant to enter fully, wanting instead to get my bearings, to see the room before being in it. And this is what I see: a bare dirt floor, grimy walls that I'm hesitant to lean up against, and a single small window high up, the moon providing the only light.

He is the only prisoner being kept here. He seems unaware of the slime of the wall, sitting and resting his back against it. He has bushy hair and a beard, though his complexion is darker than most expect. He is shackled by thick black chains both on his hands and feet, as if he really has anywhere to go. His clothes are smeared with dirt and probably blood from the day's events. His look is one of exhaustion and acceptance; he is resigned to where he is now, and where he is going.

I've fully entered now, although I am sitting across from him. I just watch him for a time, though he doesn't move too much.

A guard approaches. He peers through the small window and starts taunting the prisoner. "Won't be long now," he says. "We finally got you. We're finally ending this. Can you feel it, Jesus? Are you ready?" He says a few more things before laughing his way off.

Jesus struggles to his feet and, though inhibited by the chains, walks to the window and gazes up through it. It's so high that he's not going to see anything besides the night sky, but it doesn't seem to bother him. He stays in this position for quite a while. I continue to watch him. He seems to have taken on a pensive air now, as he studies the moon and stars. After a long moment, he retakes his position on the floor against the wall, and I elect to sit next to him.

I want to say something. I have this chance and want to ask him things about my life, my calling. But I remember where I am and what my companion is going through and this seems like exactly the wrong moment to ask any of that. I am meant to pay attention, to observe, even to participate, but not to turn this into my personal rap session.

The guard comes back and half-heartedly tosses a rusty metal cup of water into the room. I retrieve it and offer it to Jesus, who does take a few sips. We sit together for a while longer without any conversation. I start to doze off a little and apparently say something about the "perfect time." I can't remember what I said, but it prompts him to say the only thing he'll say during this entire encounter:

"There is no perfect time. There are only hours that come."

This pretty well shuts me up. I can't think of anything to reply with, and we spend the rest of the hour in silence. I turn this phrase over and over in my mind because it can mean so many different things, and to me centering on any one of them would be to cheapen it. I feel like this statement is just for me, yet for everyone.

The hour ends, and I find myself back in my dark living room. I wander back upstairs to try to get a little more sleep, haunted by that statement. I'll be haunted by it for days, and quite a while longer.
By Jeff Nelson
Email ThisBlogThis!Share to TwitterShare to FacebookShare to Pinterest
Labels: Vintage CC
Newer Post Older Post Home