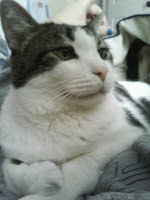 Previously: For Now, Just Live, Go Ahead and Give Up Chocolate for Lent, Homebrewing Salvation, My Easter Burden, Learning from Lenten Failures, Morning Stretches

We have three cats. I call two of them our "elder statesmen" because we've had them for 12 years and they're about a year older than that. When we got the one he was still a kitten, maybe all of 6 months old. The other we got from the Humane Society, and he was pretty gaunt in those days.

Neither of them are gaunt any more. They are well-fed and quite rotund nowadays, the result of a life of contentment and receiving love.

They're spoiled. Let's just say it. We are very enabling catparents. And we both admit it.

Nermal, the one we brought home as a kitten, has medium-length fur that, due to his increased girth, he is not able to groom as well as he used to. He has lost weight in recent years thanks to an altered diet, but he still has a lot of trouble reaching down by his tail and, in fact, I think he's lost interest in doing so. As a result, his fur tends to become matted and one of us has to use a brush to get them out.

Our other two cats don't mind being brushed, but he despises it. We have to hold him down to do it, and when he escapes we follow him around until the job is done or we wait until we've regained his trust.

Just the other day I had to brush one of the biggest knots I can remember out of his fur. It took the better part of a half hour, and I had to stalk him around our bedroom in order to complete the task. He growled and hissed at me with every stroke, but eventually I got it and he could go back to relaxing.

Every Lent, I try to address the knots in my fur, or at least maybe one or two. I become aware of one or two ways that I've let myself become a little too comfortable with some aspect of my life and, whether by giving something up or taking something on, I start brushing. It's not always pleasant and sometimes I hiss at the process, but if I'm faithful to what I've set out to do I can at least look back and see some measure of progress since I began.

As mentioned in an earlier Lenten post, I kept things pretty basic this year and gave up sugary snacks. I know how much I can rely on them for comfort and a sense of control, so I decided it would be an appropriate thing for me to go without for a while.

I think it's been a good decision. I haven't really noticed any physiological changes, but the daily awareness that has accompanied my conscious choice to not order that cinnamon bagel, to leave the Girl Scout cookies on the pantry shelf, to pick the non-donut menu item during my church's Sunday morning breakfast, has been edifying and helpful. I think about why I would usually make a different decision and the sort of dependence I've had on those options. For the most part, I haven't even missed eating those things. Every once in a while I have a craving, but it has tended to pass in short order.

What this will look like after Easter, I don't yet know. Maybe I'll just see how long I can go cold turkey. Maybe I'll try a more tempered approach. Maybe I'll attack that entire box of Thin Mints with gusto. But for today, I've been brushing the knot and can see how it has affected me.
By Jeff Nelson
Email ThisBlogThis!Share to TwitterShare to FacebookShare to Pinterest
Labels: Lent/Easter, My Journey (so far), Quotidian
Newer Post Older Post Home