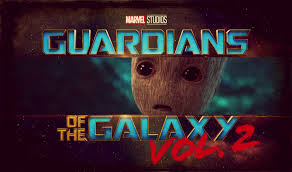 Five items for May...

1. This month we saw Guardians of the Galaxy Volume 2, in which we see that Star-Lord, Gamora, Drax, Rocket, and Groot are a more established group that hire themselves out to protect planets against threats. After they manage to anger a client (which isn't difficult for them), their escape crash lands them on a world where they meet Ego and his companion Mantis. This meeting sends each of them on a path of further discovering who they are, and what their relationships to each other mean. The film has incredible visuals, a coherent weaving of narratives, brilliantly-timed comedy, and yet another awesome '70s and '80s era soundtrack. I enjoyed this more than the first outing.

2. I finally got around to watching Luke Cage on Netflix this month, the third of four Marvel shows featuring one of the characters who will eventually become The Defenders. I really liked Daredevil and Jessica Jones, and Cage the character already made an appearance in the latter. We meet up with him as he tries to make a life in Harlem, but a network of organized crime eventually lands at his friend and mentor's barbershop door and he has to take up a mantle that he doesn't want. I tried to judge this show on its own merits rather than compare it to its predecessors, and it stood well on its own but at times struggled to rise to the same heights. For instance, I didn't find the villains as compelling; they didn't have that larger-than-life quality that Kingpin and Kilgrave did. But it did touch on some societal issues related to race that were very timely for this present moment. So while maybe a half-step down from the others, I still enjoyed it.

3. We're almost finished with the third season of Unbreakable Kimmy Schmidt on Netflix, which just came out on May 19th. This time around Kimmy is working out a divorce from the "Reverend" who held her hostage (Jon Hamm is hilarious in this role) while also going to college. Meanwhile, Titus continues to figure out how to pursue his dream to perform (he does a fun parody of the Beyoncé Lemonade video), among other things. This was actually an uptick from the 2nd season, which I really didn't get into as much as I thought I would. All four of the principal characters experience a certain maturation over the course of these episodes, which not only provided laughs along the way but helped the series as a whole move forward with the right amount of heart.

4. I recently read Tired of Apologizing for a Church I Don't Belong To, Lillian Daniel's follow-up to When Spiritual But Not Religious Isn't Enough, which received heavy criticism and scrutiny for its tone toward the "spiritual but not religious." Daniel has since heard from many who fall into that category and has learned some other things along the way, and while in this book she acknowledges that the beliefs of SBNRs are a little more variant and hard to pin down, she also doesn't want the church's attempts to evangelize or appeal to them to be one primarily of apology. Rather than prefacing every church conversation with a non-churchgoer with contrition about everything that has ever been perpetrated in the name of Christianity, she suggests that we should instead talk about what we're for, why we're different, and what we find meaningful. I was glad I gave this book a chance.

5. This month I heard about the newest album by punk band Sorority Noise called You're Not as _____ as You Think. One theme of the record is lead singer Cameron Boucher's grief after losing a good friend, which is evident throughout but very poignant in the first song, "No Halo," both the lyrics and video for which hit my soul in the face the first time I experienced them. This is a strong, stirring album that I've been listening to all month. Here's that video for "No Halo:"