May the Small Sips Be With You 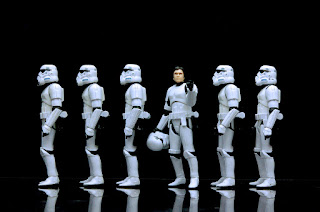 Read this a few times. Aaron J. Smith reflects on his experience with reconciling the Bible with mental illness:


The Bible is full of wisdom and food for faith in Jesus. It is the story and revelation of Jesus the gospel. But it is not the handbook for all of life we have made it out to be. It’s important that we talk about more than just what is in the Bible. There are parts of our existence and lives that the Bible never talks about because that’s not the purpose of scripture. Sola scriptura might be a good rule for our churches, but it is a horrible way to live our lives.

When it comes to matters of mental health, we need to be intentional in speaking about them, after all, 1 in 4 people deals with mental health issues of one kind or another. These aren’t spiritual problems. From addictions to eating disorders to bipolar these things are broken brain problems. We need to acknowledge the reality of mental illness in our congregations and we need to speak to it. Speaking out about it in the church is the only way to combat the unspoken (and spoken) bad theology that surrounds mental illness.

This is one of the many, many issues where the church is called to discern what its faith is meant to say and do in the absence of a clear, life-giving, informed viewpoint from scripture. That's not to say that there aren't clues or some general guidelines for how to consider those who struggle with mental illness that we can take away from Jesus and the prophets, but we do need to fill in a lot of blanks. And the way we do this is we listen to experts in the field and do the work of reconciling their wisdom with what we as people of faith can offer.

This is also why "just follow the Bible" and "just stay out of politics" are unhelpful phrases. The former doesn't actually have every answer to every problem, and the latter ignores ways disciples of Jesus are meant to respond to the very real issues of the day that affect millions of lives.

Don't force it. See what I did there? Jan Edmiston reflects on what makes traditions meaningful:


Explaining our traditions is a good thing. But making them meaningful is not something we can control (In the words of Regina George: We can’t make “fetch” happen.)

We can’t decide that something will become meaningful to us. It’s meaningful or it isn’t. Or maybe it doesn’t seem very meaningful at one point in our lives but – as time passes – it’s meaning deepens.

The tasks of a 21st Century spiritual leader include being the tour guide who explains our faith traditions and the storyteller/performer who connects the brain with the spirit.

I can think of so many church traditions I've had to navigate over the years that have been based on little more than inertia: the time when it meant something has passed, the set of people who found it meaningful are mostly gone, but the congregation keeps doing them because it's what they do. And there have been times when I've tried to start new traditions or practices where after a few times I had to admit that it just wasn't catching on; other people weren't attaching the same meaning to it that I was.

In both cases, people need to admit what is working and what isn't. And in at least some of those cases, maybe explaining it better could help others attach meaning to it and maybe fall in love with it. But you never know what will catch on and what won't, and it takes intentionality and attentiveness and discernment to figure it out and be honest about it.

When comfort is the greatest need. Mike Mercer reflects on when the call to be pastoral is more important than theological correctness:


Tonight I’m going to be sitting down with several couples who have suffered perinatal losses. It will be our first support group meeting together. They will tell their stories and I will listen, and I will probably cry with them. For the next six weeks, we’ll be together, and it will never get any easier. I’ll have trouble sleeping, imagining their inconceivable pain.

Just to think that some of them might go into a church and get a pastor like one of these neo-reformed biblicists, who cannot, with absolute confidence, assure them of the certain love of a God who welcomes, without exception, all the little ones, who lifts up the helpless, who carries the weak, and takes care of all who cannot care for themselves, makes me want to scream.

This way of approaching life and its challenges is biblicist idiocy.

Mike really brings it here. Certain strands of Christianity tend to be pastorally tone-deaf because they haven't developed a way to address people's real-life struggles. The more important point becomes saying something about God's sovereignty or parsing the finer ts and is of how people express their grief. It's unhelpful, and in some cases outright abusive.

In the face of tragedy, the church needs ways to speak comfort to those who mourn. And if "what the Bible says" is really more important than soothing another's pain, then maybe read what the Bible says about Jesus' call to do just that.

How youth group destroyed/saved the church. Miguel reflects on changes the church needs to make and how GenX and Millennial believers are changing it, but comes at it from a fresh angle:


We are looking for non-traditional churches and offerings. Increasingly it’s become about service for millennials and gen-x’ers. Not the Sunday morning kind of service, but actual getting off your bum and getting your hands dirty doing the work kind of service. There is article after article pointing to this as well ( Here’s one I found particularly readable ). In fact, the Gallup poll that was posted in that article seems to reaffirm that point as well. Millennials are looking for something different. We’ve been beaten down by the world that tells us we aren’t worth much and then shown the same from the churches we decide to try. We grew up in different programs. The vast majority of us went to youth programming at a local church. We grew up with this idea that church didn’t always have to be the stuffy pews on a Sunday morning. No, most of us experienced the Divine on short-term mission trips, in a youth group, at a lock-in (God help me), at a service project, using our talents for a youth Sunday service, or even hanging out with our dorky well-meaning youth workers. This is why so often in my career as a dorky well-meaning youth worker I tried so hard to emphasize the importance of Sunday morning. I didn’t want the trend to continue. I tried to help. But it was bigger than me.

So, in sum: churches offer a radically different experience of faith than Sunday morning worship, then eventually we expect them to assimilate into what we do during that hour and leave all they've been conditioned to expect behind. Said "graduates" of our youth programs are increasingly saying, "Uh...nope."

I think this is why I found the emerging church so attractive for a while: a lot of it sounded like youth group. Non-traditional worship gatherings, sitting around on couches or in coffee shops discussing theology, a strong emphasis on service. In a lot of ways, it was as if people who'd grown up with a certain kind of youth group experience came of age, looked around, and wanted more from the church.

I have more to say about this topic, but I have to organize my thoughts into a coherent piece of writing first.

I have watched this many times. In honor of Star Wars Day and on the off chance you haven't seen it yet, here's the first trailer for Star Wars: The Last Jedi:

Misc. Father Jeremy with a list of things that hopefully you didn't say on Easter. Rebecca Todd Peters on how to pray when you don't believe in magic. Gordon Atkinson on still thinking about someone he hurt years ago. Jeff Brumley on how the church offering contemplative practices can help reach the "spiritual but not religious." Hey, I think some other guy named Jeff wrote a book that talks about this.
By Jeff Nelson
Email ThisBlogThis!Share to TwitterShare to FacebookShare to Pinterest
Labels: Bible, Church, Justice Issues, Ministry, Small Sips, Theology
Newer Post Older Post Home