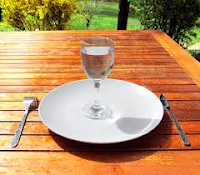 Previously: What is the Examen?, What is Lectio Divina?

I meant to have this latest entry in my ongoing series on spiritual practices posted during Lent, as many people take on fasts of various kinds during that season. Needless to say, that didn't happen. Of course, fasting is not limited to a particular time of year, and may be observed during many seasons of life not primarily dictated by the liturgical calendar. So maybe for some this is more timely now than it would have been earlier. Or it will be later. Whatever.

I'll begin by pointing out that, in my experience, fasting seems to have a bad rap among Christians that other disciplines don't, and for several reasons. One objection that I've encountered has to do with its arbitrariness: when groups I've been a part of have elected to take on a fast for a set period, some have chosen not to participate because they haven't understood its point. A second objection is that its nature is more negative: you are denying yourself something rather than taking something on, and some see even the smallest act of abstention as rigid, unnecessary, legalistic, or punitive. Finally, some associate fasting with shame. This may relate to other things such as body image issues, and some may be better off unpacking those problems or choosing another practice altogether if it raises concerns along those lines.

The rest of this post may touch on these objections, but my main intention is to explain what fasting is meant to be. I'm not interested in convincing you that it is worthwhile so much as exploring in brief what it's based on and how someone might observe it safely.

First, where does the idea of fasting come from? The best-known example probably comes from the Gospels where Jesus fasts in the wilderness for 40 days (the basis for Lent). But there are other places in both Testaments where individuals or groups observe fasts for a period of time, including the Jewish people in Esther (4:16), Paul in Acts (9:9), instructions for the Day of Atonement (Leviticus 23:27), and the call to fasting and repentance by the prophet Joel (2:15). This only touches the surface of many more Biblical examples.

At their root, these calls to fast are times of spiritual renewal and refocusing on God's presence, promises, and purpose for those who do it. At times it is an act of penance, but not always. Sometimes, as with Jesus, it is merely part of a process of focusing on one's relationship with God. The idea that it is primarily or solely an act of self-flagellation is misguided. A time of refocusing can be caused by a realization of some sinful or selfish attitude or action, but it is not the only circumstance that may call for this practice.

So, how to fast? There are at least three things to consider.

First, the how. Fasting normally is not total. It traditionally means food only; one should still take in fluids such as water and juices to keep up one's physical health. Pay attention to what your body needs to make up for what you won't be consuming. Sometimes, as during Lent, you may only fast from certain food items. Make sure you understand what is included before beginning, and how to nourish yourself.

Second, the how long. Be clear with yourself on the length of time you will be observing your fast. Are you doing this for a day? Several days? A week? Setting this timeframe will help you plan for it.

Third, the why. As already mentioned, fasting is spiritual. Its aim is to focus on God's purposes for your life. Maybe this will come with a mind-opening spiritual revelation, but forcing it or considering your fast a failure if  it doesn't happen is to miss the point. Fasting is the act of removing one thing for a time in order to place God at the center in its place. Neither should fasting be considered a quick and easy weight-loss plan. There are other ways to pursue physical goals, and having that as the primary intention is placing something other than God at the central purpose.

To reiterate, fasting is a spiritual discipline to grow in your relationship with God. Do so only as you feel personally led and with healthy preparations in place.