Small Sips Has More to Worry About

This gig's only going to get harder. You know all those articles and thinkpieces about how the church should be reaching out to Millennials? Well, Jonathan Merritt says forget those and start thinking about "Generation Z" instead:


For the last decade, church experts have been wrestling over the best ways to reach and retain “millennials,” which is a phrase the describes individuals born from the early 1980s through the mid-1990s. Data shows that many millennials leave the church during their college years, and some never return. The fastest growing religious identifier among this generation is “spiritual but not religious.”

But as millennials age, get married, and start families, they are no longer the only “young people” that churches must consider. A new cohort has risen: “Generation Z” or individuals born between the mid-1990s and early 2000s. Generation Z diverges from millennials in many ways and presents unique challenges and opportunities for churches who hope to capture their attention.

And what do those divergences include? The person Merritt interviews names things like their being the first truly "post-Christian" generation: they haven't really been raised in churches, and are religiously and Biblically illiterate. They don't have pre-conceived notions about what those things mean and they have no assumptions about why Christian belief, language, and practice are valuable.

This says to me that a lot more of the things traditional institutional churches think are important are going to need to find new justification for why they should continue. That was already something to consider with Millennials, but according to this article, it will be taken to another level with those after them.

But wait, there's more. Speaking of churches finding new justification for things, Anita Little says that a lot of those things just plain aren't going to appeal to Generation Z. Like, at all:


Most churches are not “well-equipped” to “meet the needs of Generation Z” because, as institutions, many of them have been slow to embrace, or outright hostile to, the increasingly progressive philosophies Gen Z espouses.

It isn’t just “technology,” as White argues, it’s how Gen Z uses that technology to broaden its worldview and find value in belief systems beyond the walls of the church and Christianity itself. It may not always lead to disaffiliation, but it certainly contributes to it.

The feasibility of White’s goal of bringing in Gen Z successfully is dubious at best, as many churches are not meaningfully addressing the social issues that matter the most to Gen Z. How they lost Millennials is exactly how they will lose the tweens.

As Little observes, this has been a common argument for Millennials as well. They tend to view things like sexuality and race more progressively than many churches, and aren't going to want to join institutions that don't share those values and concerns. While her analysis focuses on evangelical churches, there's a lot of crossover for mainline/oldline/whatever churches, too.

And hey, let's do another. Karl Vaters has a slightly more optimistic take on Generation Z (and many others who are older) being first-generation believers, and lists some reasons this group has been a benefit for his approach to ministry:


1. I can't assume even the simplest biblical understanding

...including what the Bible actually is. So, in addition to teaching from the Bible, I always teach them something about the Bible.

Also, I don’t use phrases like “we all know the story of…” to summarize a Bible lesson.

And I never assume that everyone owns a Bible. Instead, we make free Bibles available and I tell them the page number where they can find Ephesians.

Because of this, I have to (and get to) teach the basics more often.

I think that this really gets at the heart of how to begin approaching what the other two articles point out: churches need to completely give up the assumption that younger generations will know anything about the Bible, will have absorbed any of the Christian lingo, will have any attachment to or appreciation for the rubrics of worship or prayer or anything else related to belief or practice. It's not going to be there, and if we operate insisting that it is, we're not going to make a connection.

This article has already started to influence my own approach to such things, and I'm sure I'll be returning to it often.

Something different, but no less important. Alex Myles has an important piece on the attraction between an empath and a narcissist:


What the empath fails to realise is that the narcissist is a taker. An energy sucker, a vampire so to speak. They will draw the life and soul out of anyone they come into contact with, given the chance. This is so that they can build up their own reserves and, in doing so, they can use the imbalance to their advantage.

The further I get away from it, the more I realize that I was in a relationship like this, where I was the empath constantly trying to validate, provide for, and give to a narcissist. The way this article describes how such a relationship plays out fits what I went through to an amazing and perfect degree.

I'm still processing and kicking myself for things that happened, and this was years ago. Please take the time to read that whole thing so you can watch for the warning signs and avoid it happening to you.

Speaking of toxic features of relationships. Layton Williams reflects on the question, "Who owns a pastor's body?":


Whether consciously or not, the “ideal pastor” image celebrates maleness over other genders. It celebrates heterosexuality, able-bodiedness, fitness, and married status. In my denomination, at least, it also celebrates whiteness over other races. When we are criticized for something in our appearance or personal lives, it is almost always based on how we fail to live up to these normative ideals of identity — which, it’s worth noting, have nothing at all to do with faithfulness or morality.

Female clergy experience this reality to a particularly complex and intense degree. Though nearly every pastor I know has received some unwelcome commentary, most of the clergywomen I know get comments on a regular basis. This is especially true for those of us who are young and single and, in my case, further complicated by assumptions about my bisexuality. The lenses through which women clergy are viewed and evaluated are compounded by sexism. On some level, many people encounter us with distrust and judgment for our inability to fully embody the image of a male pastor. Our voices are critiqued for pitch and vocal fry. Our hairstyle is regulated more ardently than our theology.

I've received comments over the years like the ones Williams mentions. I've heard about my age, my weight, my looks, and what I've chosen to wear on various occasions. Usually I can shrug it off, but I can't always differentiate between someone offering a harmless compliment vs. someone attempting to assert control over my lifestyle, appearance, or authority.

As Williams mentions, it gets way more complicated for women than for men. I've heard a lot of awful stories from woman colleagues over the years along these lines, and they've never been helpful. Churches need to be educated about what's really appropriate to say. 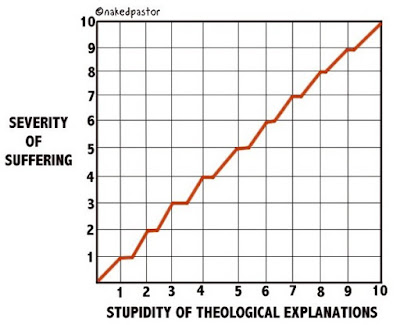 Also accurate. Jon Pavlovitz has an answer to those who say progressive Christians should read their Bibles. That answer is, "I did, and that's why I'm progressive:"

When another Christian instructs someone else to “read the Bible,” or “take it to prayer,” or to “ask God to reveal the truth to you,” they usually mean, “Do all of these things until you get it right—until you agree with me.” They are assuming their version of study and reflection are more valid than another’s.

And this is the beauty of Progressive Christianity: it doesn’t insist that others agree with it, it doesn’t claim superiority, and it holds its conclusions loosely. That doesn’t mean it has arrived at its present place impulsively, lazily, or ignorantly. Quite the contrary. I’ve met thousands of Christians who hold more liberal positions on all sorts of topics, who didn’t begin that way. They have come to those positions after years or even decades of careful, prayerful, faithful exploration. They are as intelligent, invested, and earnestly seeking as their more orthodox brethren.

I won't defend the claim in the above that progressive Christians don't claim superiority, because I certainly have seen some who do. But the notion that Christians who come to more liberal stances on various social issues just need to read the Bible more is incredibly flawed. The Bible is such a rich, varied, and challenging collection of texts that it certain things aren't as clear-cut as many believe, and there is such an extensive call to help the poor and downtrodden such that many Christians who call themselves progressive have come to these positions by reading the very book others insist they haven't.

Misc. Jonathan Merritt again on why, given author Jen Hatmaker's recent struggles, he'd take her over her critics any day. Jan Edmiston asks, "When I say 'poor people,' what do you picture?" Ryan Phipps on the paradox of pastoring. Scott Johnson with a theological take on Guardians of the Galaxy Volume 2. Elsa Anders Cook on journaling daily observations.
By Jeff Nelson
Email ThisBlogThis!Share to TwitterShare to FacebookShare to Pinterest
Labels: Bible, Church, Funny If It Wasn't So Sad, Ministry, Small Sips, Theology
Newer Post Older Post Home