To My Self 15 Years Ago on His Wedding Day 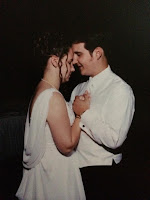 Greetings from your future, and congratulations on your--or, I guess our--special day. I'd acknowledge how much planning and effort has gone into today's festivities, but let's be honest: most of it wasn't yours. But you're here now, stomach full of chicken wings from the night before and not running on much sleep due to nerves, preparing to make things official with the woman you've come to know as the love of your life.

I'm sending you this letter because I want you to know some things about the next 15 years. I'll try to keep things spoiler-free with specifics, but if I can help you with some general points to expect or live by or beware of, I think it might help us both out.

First, call all your groomsmen right now and make sure they've eaten and are well-hydrated. Just trust me on this.

Second, don't worry too much about remembering anything from today. Your photographer will have you on a schedule that will make you believe it's more about everyone other than you. Just get through it. There will be more important memories to be made later on anyway.

Okay, now that I have the wedding advice out of the way, let's talk about the marriage.

You're going to be broke for a while. I don't think I'm spoiling anything by telling you this. You're a seminary student, she doesn't even have a job yet. And I know that you have visions in your head of living some kind of romantic hipster lifestyle in your little apartment where you're both going to be students cooking cute little trendy dishes for each other.

Let's just say it's going to be more complicated than that. In fact, finances will be one of your top struggles for a few years, and not only will it be a strain on what you can afford but on how well you'll support and understand each other as you each try to help make ends meet. That stat you once heard about money being a big cause of divorce is no joke. So pay attention to your spending and give her in particular a lot of leeway because she'll be the one doing the heavy lifting in this area while you prance to and from your classes. Seriously, man. Don't take this or her for granted.

And that leads me to my second thing: communicate. Tell her how you're feeling about things, whether stress about classes, frustration about school, what you're worried and excited about. Later on, tell her stories from your first job. Just share yourself as well and as completely as you can. I know how difficult this is for you; how much you worry about saying the wrong thing or being misunderstood. You get better at this even though you'll never stop worrying about it. But the more you talk about what you're thinking and feeling, the better she'll get where you're coming from. It still won't excuse some of the dumb stuff you're going to do over the years, but there's a good chance it'll help.

While you're at it, listen to her. All those ways I just told you to put yourself out there for her benefit, receive those same things from her with care. She's already better at doing this than you, but you also have to open yourself to what she's saying. She's got her own frustrations with school and career coming, and you have to be ready to hear her out. She's trusting you with this, and you should appreciate that.

Okay, here's one spoiler: you have kids. Two of them. And I can tell you they're both beautiful, hilarious, intelligent, curious, and fun, and they're two of the best outcomes of what you're doing today. I'd attach a picture, but I know that it'll just cause you to blubber your way through the vows later. And I'll save the parenting advice, because you'll get way more than you'll want or need when the time comes. Instead, I'll say this: the adjustment will take a while and at times be a pretty big strain. So keep three things in mind:

1. All that stuff I just said about sharing and listening? Keep doing that, except harder.

2. Make sure to keep being a couple, not just roommates with kids. They're really important, but not at your relationship's complete expense. You'll figure out how to do this, I'm just saying be prepared.

3. I mainly wanted to tell you about the children because holy crap, do things get amazing for the two of you. I mean really, I can't even describe with words how good it all gets. I mean, yeah, there are some frustrating times, but I could just keep going on and on about...

Sorry. Where was I?

Okay. Let me wrap this up, because this is getting long and the photographer will be coming for you any minute.

Enjoy your day. Really, enjoy it. There's a lot to celebrate and you and I both know how wonderful she is. And make sure you keep celebrating her long after today, when you're stuck eating Ramen for the third night in a row and when you're up with one of the babies again and when one of you are working late or have to get up stupid early and when you're enjoying geeky things together (They're going to bring back Doctor Who in a few years...start watching that as soon as they do instead of waiting for Netflix to pick it up. Wait, you don't even know what Netflix is yet. Just trust me, okay?).

It's not going to be perfect, but it's going to be worth it. And it'll take some work, growth, and change on your part to make it so. Be open to that, because she's going to make you better.