Vintage CC: This Day in History 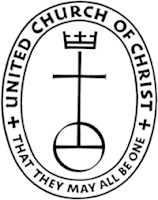 This Sunday is the 60th anniversary of my denomination, the United Church of Christ. I wrote this post back in June 2008 to make light of all the trouble the UCC has had educating people that it isn't the same as the Church(es) of Christ. I look forward to being at General Synod next week to celebrate this milestone.


Guy: All right, everyone. We've pretty much worked everything out except one detail. What shall we call this new church of ours? I propose that, since we are a newly united church, we should call ourselves the United Church of Christ.

Second Guy: Um...pardon me for a second.

Second Guy: Yeah, about that. Don't you think that if we called ourselves that, people might confuse us with the Church of Christ?


Guy: Why would people do that? It's a totally different church.


Guy: You answered your own question. Clearly, our name has the word "United" in front of it.

Second Guy: But people might not get that they're different.

Second Guy: I'm just saying that maybe we should think about something more distinctive...


Guy: We'd have the "United" in front, plus we use organs. No one could ever confuse the two.


Guy: Not possible. People will be able to tell the difference. Our own members, non-members, the media, the governor of Connecticut...they'll all easily recognize that we're not the same and always call us by our proper name.


Guy: Of course they will. UNITED Church of Christ. It's can't-miss. We'll never ever have to explain to anyone that they're different.

Second Guy: But is adding an extra word going to be enough? They still seem really close...


Guy: All in favor of "United Church of Christ" as our new name, say "Aye!"