Small Sips Made a Flowchart

Wanna be the church? Then be the church. Aaron Loy shares his own struggles with depression, and calls for the church to do better when it comes to mental health:


Sadly, Christians still tend to make the mistake of only treating difficult issues like depression spiritually. As a pastor, I’m all for addressing the spiritual, but depression is far too complex to be treated so simplistically. Depression is more than just a spiritual issue. It is also a physiological one that can affect even spiritually healthy people in debilitating ways. If you are a Christian who struggles with depression, don’t make the mistake of thinking if you just pray enough, claim enough, repent enough, or believe enough you will be cured. That may be part of the solution, but you may also find you need to treat the issue medicinally and therapeutically as well. Each is a gift and an expression of God’s grace. Please ignore anyone who tries to shame you into thinking otherwise.

We can no longer afford to ignore mental health issues in the church. Though this may be new ground for many of us, we’ve got to lean in so that we do not make the mistake of continuing to misunderstand and mistreat the growing number who suffer among us. For some, this can literally be the difference between life and death.

Most churches fall short of what's needed to help those struggling with mental illness. They either look the other way, offer platitudes about praying more or believing harder, or recoil in fear. If the church really wants to be a community of love and support, it needs to find ways to walk with people and ask what role they can play alongside the person receiving treatment and care from certified professionals.

Cynicism: a divine gift? Jamie Wright, aka the Very Worst Missionary, is back blogging, and has some thoughts on what she and her fellow cynics can offer the church:


Our approval of All Things Christian can’t be bought with vague over-spiritualization or authoritarian proclamation. We require more. We ask hard questions and demand real answers, and it’s not because we’re just a bunch of jerks who get off on tearing down other people’s ideology. Sometimes, it’s actually because WE LOVE GOD and WE LOVE PEOPLE, and even though we’re kinda mortified by Churchy bullshit, WE. LOVE. THE CHURCH.

That’s why we stick around.

We stay because we know that, while there are so many things wrong, this is the Church that made us, the same Church that introduced us to Jesus. And we’re still big fans of Jesus. We stay because we weren’t always this cynical; we remember what it was like to feel content with simply showing up to check the boxes of the good Christian life, and we remember how even that changed us. We stay because we honestly believe the Church can do so much better. We want to dismantle broken systems to build a healthier community of Christ followers. So we stay in The Church and (when we can) we stay in our churches because we love them, and because we’ve been cynics long enough now to know how a negative perspective can spark a positive change.

At first I wasn't sure about this, because it's not always evident that "being better" is what church cynics seem to want. And another contingent of people who say they want the church to be better are ready to pack it up and head down the street to the next place before things really start to change. Having tried so many things in nearly 13 years of ministry, I'm a little cynical about the cynics.

But I understand the cynicism because often, they and I are cynical about many of the same things. But maybe because I'm the Professional Church Worker, they sometimes don't see it or trust that I'm on their side.

I do think that, when shared gently and openly and with actual church leaders and not just in parking lot gripe sessions, cynics do have a gift to share with the church.

To me, social media is a great way to let off steam and scream into the ether when you don't feel like you have another outlet for your opinions. And it seems as if the vast majority of people just hear screaming. To be sure, social media can be more than cat memes and recipe videos, but they clearly don't go that far in terms of swaying others to one's own side. Rather, such things cause people to dig in harder or end relationships altogether. While sites like Facebook aren't going away and have normalized certain ways of communicating and interacting, it has turned out to be not the most effective way to engage in conversation with people you disagree with.

I mean, it's not complicated. Some want to pretend that it is, but it really isn't: 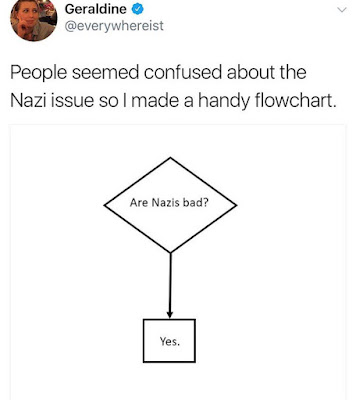 Misc. Jan Edmiston on the church needing to learn ways to minister to those dealing with trauma. Rocky Supinger with a reminder that equating white supremacists and those who oppose them isn't a new thing. Vanessa Chiasson on funeral eulogies being one small step of a larger journey of closure.
By Jeff Nelson
Email ThisBlogThis!Share to TwitterShare to FacebookShare to Pinterest
Labels: Church, Funny If It Wasn't So Sad, Justice Issues, Ministry, Politics, Small Sips
Newer Post Older Post Home