What is the Liturgical Calendar? 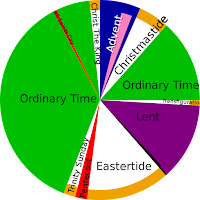 Both people who use the liturgical calendar and those who don't might not consider it a spiritual practice. Many familiar with it know it as the primary determinant for the rhythm of a church's worship life throughout the year, including how you decorate the sanctuary, what sorts of songs you sing, and the scripture texts that are read and preached on. And yet this in itself is the shaping of spiritual practice; how one moves through one theme to another, one calendar alongside others.

There are possibilities beyond Sunday worship of both communal and individual natures for spiritual formation as well.

First, what do we mean when we talk about a "liturgical calendar?" We mean a schedule of dates and seasons laid overtop that of the Gregorian calendar that commemorate different moments in the life of Jesus and the early church. Various cycles for reading and preaching certain Biblical texts called lectionaries have been set up to coincide with the liturgical year, highlighting certain themes and stories according to the season.

The liturgical calendar did not emerge whole cloth. Rather, it was established gradually with certain days and seasons preceding others (did you know that Epiphany used to be a bigger celebration than Christmas?). Eventually, most church traditions settled on an agreed-upon calendar that they still observe today. The Orthodox tradition does things a little differently, which is for another post. The rest of this explanation will deal with what most other traditions know and observe.

What, then, are the seasons of the liturgical calendar?

Advent: The very first season of the calendar begins on the Sunday closest to November 30th and is marked by the 4 Sundays prior to Christmas. The traditional color of Advent is purple to symbolize royalty and waiting, and is a time to reflect on themes of yearning for God's redemption and salvation in dark times. Many churches also use blue to symbolize hope. This season is one of preparing for and anticipating the arrival of God's new promise in the form of the birth of Jesus.

Christmas: This is known more as a single day than as a season, but the celebration of Christmas actually lasts 12 days beginning on December 25th and continuing through January 5th. The color of this season is white, which symbolizes purity and God's glory. It is the celebration of the arrival of Jesus, the one promised and hoped for during Advent.

Epiphany and the season after: Varying in length, the season after Epiphany starts on January 6th and lasts until the day before Ash Wednesday. The color of Epiphany Day is white, but the season after is usually green to symbolize what is called Ordinary Time, when we also think about how God is part of our everyday lives apart from special celebrations. As mentioned, Epiphany preceded Christmas and was and still is a time to reflect on the mystery of God's incarnation in Jesus. Part of this season's culmination is Transfiguration Sunday, during which we read the story of Jesus' appearance changing on a mountain to hint at his special identity as God's Son.

Lent: Beginning on Ash Wednesday, Lent lasts 40 days and 6 Sundays, ending on Holy Saturday, the day before Easter. The Sundays of this season are listed separately because they "don't count" toward what is meant to be a time of penitence, preparation, confession, and discipline; you get to enjoy a small time of celebration and relief one day a week. This season's color is purple, again symbolizing royalty and waiting. It culminates during Holy Week, the final week of Lent, which is a time of remembering and re-presenting the events of Jesus' entry into Jerusalem, final meal with the disciples, arrest, trial, and crucifixion.

Easter: Considered the highest day on the calendar, Easter is the joyous celebration of Jesus' resurrection. Like Christmas, people often mistake this as a one-day observance, when really it is a season that lasts 50 days, often called The Great 50 Days. The color of Easter is white, symbolizing new life. This season features many stories of Jesus' appearances to the disciples and others after being raised, and his instructions to them to continue his ministry. This season ends the day before Pentecost. It also moves around on the calendar, set on the first Sunday after the first new moon after the Spring Equinox, which can set it anywhere from late March to late April. This in turn affects when the seasons around it begin.

Season after Pentecost (Ordinary Time): Beginning the day of Pentecost, which is the celebration of the Holy Spirit's descending on the disciples in Acts 2, this season spans 5-6 months through most of the summer and fall until we begin again on the First Sunday of Advent. This season is colored green, symbolizing the ordinariness of the everyday and God's presence in it apart from a special observance.

With all that explanation and background, how do we use it as a spiritual practice?

1. Find a calendar, devotional book, or website that can serve as your go-to reference for where you are in the liturgical year. There is an embarrassment of riches when it comes to this; find one you're most comfortable with and can access with little trouble.
2. Find the season, week, and day (if applicable) of the current season. In many books and websites, this will include relevant scripture readings.
3. Explore other traditions associated with the season. During Advent, for example, many light Advent wreaths to mark the Sundays leading up to Christmas. During Lent, many take on a discipline of "giving up" some indulgence or habit. There are many possibilities to help you really get into the season in mind, body, and spirit, beyond reading scripture.
4. Set aside time to spend with the stories and figures that give shape to the season, e.g., the prophet Isaiah or John the Baptist during Advent, the post-resurrection stories during Easter, or the early church stories in Acts during Ordinary Time. Use lectio divina if it will help.

The possibilities are quite bountiful when it comes to using the liturgical calendar for one's own spiritual enrichment. It can serve to shape the rhythm of your devotional life not just on Sundays, but every day.
By Jeff Nelson
Email ThisBlogThis!Share to TwitterShare to FacebookShare to Pinterest
Labels: Bible, Spirituality
Newer Post Older Post Home