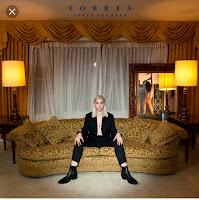 1. I read Confessions of a Funeral Director by Caleb Wilde this month. I've long enjoyed Wilde's blog of the same name, and this was on my shortlist of must-read new releases this year. Wilde writes of his experience in the family business, sharing many individual stories from his time in the profession but also using them to talk about his own struggles with burnout, our culture's fear of death, how we grieve, spirituality, and more. I found myself reflecting on many of my own experiences around funerals and the different ways people approach it. I think this would be a great resource for clergy, but for anyone in general who wonders what goes on behind the scenes in the "dismal trade," as well as those seeking a more well-rounded spirituality of death than what many resources offer.

2. I watched What Happened to Monday this month, a Netflix Original film set in the near future where overpopulation and food scarcity have caused a law to go into effect stating that families may only have one child. If a family has more than one, the children are cryo-frozen until some hoped-for time when the population drops. Terrence Stettman (Willem Dafoe) ends up with septuplet grandchildren (all played by Noomi Rapace), whom he is determined to keep hidden while setting up a system where each is named after a day of the week and can only go out on their namesake day. But of course they're eventually found out, and everything starts going wrong. As an action film set in an authoritarian dystopia, it was fine. It was on the gloomier side, but was an interesting concept.

3. I also watched Get Out this month, starring Daniel Kaluuya as Chris, a young black man whose white girlfriend Rose (Allison Williams) brings him home to meet her family. While the family seems warm and welcoming, it doesn't take long to see that there's something strange and sinister underneath their accommodating demeanor. This suspicion is amplified by tone-deaf racial comments various family members make thinking they're helpful, and the only other black characters acting stilted and strange. I figured out the plot because it reminded me of another movie with a similar premise, but the execution and message was still well-done and I can see why this has been deemed an important and meaningful movie since it was released.

4. I watched the first season of Ozark this month, a Netflix Original series starring Jason Bateman as Marty, a financial advisor whose partner has been embezzling from a Mexican drug cartel for whom they've been laundering money. He convinces them to spare his life by saying he'll keep laundering for them by moving to the Ozarks and doing it for them there. Once they get there, they find several groups of characters, frequently with their own sinister ends in mind, who put what he's trying to do in jeopardy. I thought I'd like this more, but it amounts to a bunch of people being miserable in the woods threatening each other, with every episode feeling twice as long as it really is.

5. I've been a Torres fan since hearing her 2015 album Sprinter, so I was excited to hear about her follow-up Three Futures, released at the end of September. She takes a different approach on this album: it doesn't have as many hooks and there aren't many driving tunes. The entire thing has a slower, more reflective tone. Here's the video for the title track: