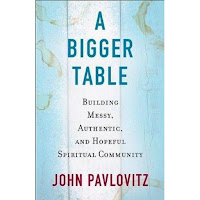 When we look to expand the table, we will invariably be pulled in all directions by those who are more interested in claiming ownership of our allegiance than extending grace to the other. The more I've sought to be about the work of loving all people, the more I've come to see how that will really piss off some people. Jesus didn't meet with just those who were deemed his social equals or those who could further his cause or those who would boost his platform (In fact, he specifically warns against such self-serving hospitality; see Luke 14:12-14.) He had friends in low places too. That was the strategic beauty with his invitation, Jesus affirms the value of his disparate meal companions to them and to those watching from a distance. - John Pavlovitz, A Bigger Table

Before I read anything by John Pavlovitz, I heard him. He was a guest on one of my favorite podcasts a few months ago, during which he talked about his journey through faith and the church. Having been a pastor for 20 years, he focused on those experiences, taking special note of moments that led to his wanting to expand beyond the literal and metaphorical walls of institutional religion.

These experiences seem to form the basis for A Bigger Table: Building Messy, Authentic, and Hopeful Spiritual Community. Having become dissatisfied with the ways most churches (and American Christianity in general) tend to limit their notions of welcome, affirmation, and acceptance, Pavlovitz senses that many others have as well. This serves as his call to both those inside and outside the church to expand their understandings of what faith community can and should look like, based on the person and teachings of Jesus.

The first part of the book is a little more autobiographical. Pavlovitz shares some of his experiences both from his early years and his ministry career that contributed to his evolving understanding of Christian community. Having grown up with a more conservative concept of Christian belief, he shares how these have been challenged as his encounters with a larger and more diverse world opened his eyes to possibilities he hadn't before considered: "Sometimes reality begins to argue with your theology" (p. 37).

Experiences that he shares in this section include his employment at a restaurant owned by a gay couple, and getting fired by a church for encouraging people to question traditional claims about God and the Bible. These instances cause him to revisit previously held beliefs about how to view those unlike him and how much many churches will tolerate before protecting cherished dogmas and practices.

The second section introduces what Pavlovitz believes to be four foundational concepts to a more welcoming and inclusive expression of Christianity: radical hospitality, total authenticity, true diversity, and agenda-free community. Some of these naturally overlap, and a few run the danger of overused terminology: many a faith-based movement has invoked "radical hospitality" and "authenticity" in the past 10-15 years, with varying success.

One point that Pavlovitz makes several times in this section is that a Christian community can't be half-hearted about any of these. If you want to be hospitable, then you have to go all in. If you want to be fully authentic about questions and doubts, then you need to allow for such things to be expressed on their own terms. If you really want to be a community, you'll have to prepare yourself to embrace that not everyone will be like you, and you'll have to come at it from an angle other than wanting to change them to make yourself more comfortable.

The final section expounds on the second, showing ways both of how not to proceed with these concepts and how best to do so. He reverts back a little to more of an autobiographical tone here, with stories from his own life of times he saw what some of these concepts look like in practice. They include having dinner with rescued prostitutes, learning about how to be more accepting of a young man seeking a place to belong, and his building relationships with people of religious backgrounds other than his own. Many of these serve as examples of what a bigger table can look like in practice, if pursued intentionally.

A Bigger Table is an accessible call to a Christian faith and practice that many both in and outside of the church would like to see, if it was more readily available. Pavlovitz shares a vision that is not unique, but that can serve as yet another sign of hope that it is possible and that he and many others are striving to bring it into being.