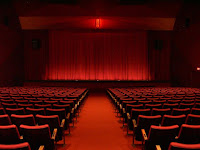 I used to be a regular participant in theatre. For a while, it was one of the most meaningful activities I was a part of, for multiple reasons. It brought me out of my shell during a time when I was hesitant to apply myself in much of anything. Walking onstage for my first audition was a revelatory moment in that it felt very natural, as if this moment could have happened much earlier if I’d allowed it.

In those years I had the opportunity to play parts such as Mercutio in “Romeo and Juliet,” Stephano in “The Tempest,” the title character in “The Importance of Being Earnest,” and Sam Weinberg in “A Few Good Men” (Kevin Pollack’s character in the movie version). Being a part of these casts, working together to rehearse and anticipate bringing forth our production for an audience on opening night, was life-giving. It helped give me focus and discover talents that I didn’t know I had.

I recall one memorable exchange that I had with a director after I wasn’t cast for a play. As many others, I was surprised and disappointed by the outcome, as I thought I had a good audition. A day or two after the cast list was posted, the director pulled me aside to talk about it. He and I knew each other, as by that point we’d been involved in several productions together. He said, “I respect your talent, and that’s why I didn’t cast you. People were better for the main parts, and I didn’t think that it would be worth your time to give you a smaller role.”

I thought I had the right gifts to play a role, but somebody else saw something different. While he could appreciate my ability in other places and for other parts, he couldn’t find the right fit for me in this instance. Before hearing his reasoning, I could have sworn that I had what it took, but from his perspective—having seen others’ gifts and abilities as well—he chose someone else he thought to be better. I’d have a role to play some other time instead.

Discernment is not a solitary exercise. We’re meant to do our own work of seeking what we’re called to do, figuring out what we’re best at, weighing our gifts and passions against the world’s needs, and considering other factors in our lives that could and should influence how we think about all of it. However, this is not work that we do alone. Just as often, those around us who can see aspects of our selves to which we are blind; that we are ignoring, downplaying, or overestimating.  We may not always like what they have to say, but they can see things we can't, and know when a desired role is too big for us at a certain time in our lives, as well as when we should pass on something because it would underplay our gifts.

Those who know us can help us name the role we’re meant to play in God’s world. They do so by helping us identify our gifts, encouraging us to develop in other areas we’re neglecting, and assisting us in finding the right part. Other people are critical to discerning our call and identity.