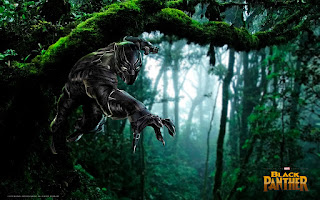 1. This month I read Vital Vintage Church by Michael Piazza, a pastor and speaker known for his leading congregational turnarounds. I've attended several workshops with him the past few months with a couple more to come this spring, and I found his material very compelling. This book is basically most of that same material in print form, as he describes ways that long-established and declining mainline congregations can revitalize and re-energize themselves for ministry in the 21st century. He talks about the importance of dynamic worship (not necessarily contemporary, just something that has energy and engages the senses), having a strong social media presence, making stewardship and generosity year-round issues, moving meetings to electronic form if you have to have them at all, and being bold about who you are to your community. I liked the book version as much as the verbal version I've been enjoying since September, and am glad for Piazza's insights.

2. We saw Black Panther this past weekend, which picks up shortly after the events of Captain America: Civil War. T'Challa is still mourning his father, but also preparing to take the mantle of king of Wakanda. He soon picks up on the whereabouts of a longtime nemesis of the country, and in his pursuit discovers some alarming secrets about his family. These secrets are personified in the arrival of Killmonger, who raises some legitimate objections to how T'Challa and Wakanda conduct themselves, especially given his own history. The movie has some stunning visuals and tight fight sequences, but also touches on some of the social issues being widely talked about today. It was one of the deeper movies of the MCU, with some very touching scenes and relevant commentary.

3.My son and I also went to see Jumanji this month, which is kind of a sequel to the Robin Williams movie that came out 20 years ago. I say "kind of," because references to that earlier movie are minimal, though I admit clever. Here the board game somehow transforms into a video game that eventually sucks four high schoolers who couldn't be more different into its world, making them into avatars that are their polar opposites: the skinny geek becomes The Rock, the jock becomes a short sidekick (Kevin Hart), the pretty Instagram girl becomes, in her words, an overweight middle-aged man (Jack Black), and the shy brainy girl becomes a sex object/fighting expert (Karen Gillan). As with the first movie, they have to finish the game's quest in order to escape, but of course they each also learn important life lessons along the way. It was silly, action-packed, and fun, with a lot of over-the-top sequences and slapstick comedy, and I'm a big fan of three of the four leads anyway (sorry, Mr. Hart), so I just wanted to see it because I liked the actors.

4. The second season of The Good Place concluded at the very end of January, with the four protagonists still trying to navigate the afterlife even with its twists, turns, and ethical dilemmas. As the episodes progressed, their understanding of their world advanced, causing them to try to partner with Michael, the creator of their neighborhood, to improve on their situation, with plenty of missteps along the way. This remains one of the cleverest comedies to come along in a while, and I'm looking forward to season 3.

5. Dessa's latest album, Chime, just dropped today. I've been a big fan of her music since I first heard A Badly Broken Code and have been looking forward to this release for some time. Here's the video for her second single, "Good Grief:"