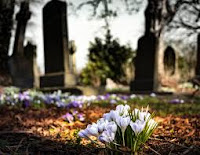 In November 2002, I received a phone call that you never want to get. I can remember what I was doing when my wife handed me the phone, and where I was when the person on the other end shared the news.

On that day, a series of tornadoes had ripped through parts of Ohio, including Seneca County where I'd attended undergrad. The caller, my best friend from those years, was sharing that the only casualty in that part of the state was our friend Darren.

The next few days were a whirlwind of emotions and planning. We, along with many others who'd scattered since graduation, descended back upon our old haunts for a reunion we hadn't planned for and didn't want.

One of my most distinct memories of our few days back came during the calling hours. On the one hand there came a steady line of shell-shocked 20-somethings parading up to the casket, most very quiet and unsure of what to say in response to a friend gone at such a young age. On the other hand, I recall a couch full of guests right next to this line, laughing and joking around. And this laughter was not borne of reminiscing, where a funny memory of the deceased would cause a few chuckles. No, this was a laughter that came from random humor shared by people who didn't seem very aware of their surroundings.

One thing was sure that day: neither side, in their own way, knew how to handle the moment.

This is a common affliction. In the face of tragedy, suffering, and loss, most don't really know how to respond. The circumstances are too uncomfortable or too beyond our understanding for us to be or feel very helpful. Sometimes we want to help but fall short. Other times we try to shortcut to making ourselves feel better.

So in the face of illness or death someone might say, "Well, everything happens for a reason."

In the face of depression or anxiety, people might say things like, "Just suck it up and try being happy."

In the face of spiritual doubt, someone says, "Just pray more" or "Just believe harder."

In the face of sadness or grief, someone ends up saying, "It's been so long since that happened. Aren't you over it yet?"

These clichés, these attempts at deflection that may come with nervous laughter, are people trying to play off what they don't know. They don't know how to handle the moment.

The women at Jesus' tomb know. They know what you're supposed to do after a loved one's death. There's a ritual to it; they have a plan. They approach with spices, ready to honor their friend's life by giving him a dignified burial. But those plans are tarnished when they find the grave open and the body gone.

This is not an April Fool's joke. It's not a moment where someone pops up and says, "just kidding!" They know this because they'd seen what happened. When all the others had run to preserve themselves, the women had stayed and watched until the bitter end. And because they knew how death works and how the Empire works, they knew that what happened had been definitive and decisive. This was no prank and there'd be nobody getting his jollies during the receiving line.

But still, what they find is not what they expect. Again, the tomb is empty, Jesus is gone. All that remains is a stranger proclaiming that he has been raised. And the women react as honestly as most perhaps would: instead of following through on what they're told to do, they run and tell no one. They're fearful and amazed, not joyful or relieved. They don't know how to handle the moment.

Mark's version of the Easter story is the most relatable we have. It's the most true-to life; the one that seems to understand our human nature the best. It's the one most effective at speaking into our lives when we gather to celebrate resurrection, or at least try.

We're here like the women, also encouraged to proclaim, but maybe all we can do is whisper.

We're encouraged to sing, but maybe it's all we can do to mouth the words or just stand.

We're encouraged to be happy and joyful, but maybe we can just barely smile.

We're encouraged when prompted to respond, "Christ is risen indeed," but maybe we say it as more of a question.

Because something we're dealing with, something we've brought with us, makes us hesitant. As with the women, the moment doesn't yet seem right for proclamation or singing or joy. The best we can do is consider it, hope for it, take it home to wrestle with it and make sense of it more slowly over time.

Years after the funeral, I visited Darren's grave. I was back in the area for a conference and took the opportunity to stop by. I had a general memory of where his stone would be in the cemetery, and found it with ease. The marker includes engravings of some of his deepest loves, as well as his portrait, forever 24 years old.

It was a clear day, and I was alone. As I stood in silence, the wind picked up, and I heard something with it: my name. My name was being spoken just loud enough for me to hear, as if wisping through the trees. It was enough for something to shift within me; to be assured that life had the final say over grief.

We may not know how to handle the moment when pain and suffering intrude on our lives. But given enough time, things begin to change. And all it takes is some small thing, some little unexpected happening to crack open the tomb just enough for light to slip inside. And then maybe a little more gets in, and a little more.

And then, at long last, resurrection becomes true.