Does belonging matter? Jan Edmiston asks whether belonging to a faith community makes any kind of a difference any more:


Some people join churches to gain a wedding/baptism/funeral venue. And some join because it eases entry into a good preschool. Or maybe we actually join in hopes of truly belonging to a community of people who love us no matter what and who remind us that God loves us no matter what.

Loneliness is a killer. John Cacioppo, who died last month, studied the effects of loneliness and said, “Chronic loneliness increases the odds of an early death by 20 percent which is about the same effect as obesity, though obesity does not make you as miserable as loneliness.” I often ask congregations, “What breaks God’s heart in your neighborhood?” and more than one church has answered with one word: isolation.

We are an isolated people in terms of truly belonging. Although we might have hundreds of social media friends, how many of us have 3 people we could call in the middle of the night to come over because we are a wreck?

This question isn't unique to churches by any means, but in an age where people are either looking for a particular kind of church experience that caters to individual needs and comforts or insisting they don't need church participation at all, it bears reflecting on what is beneficial about belonging.

Among such benefits are mutual encouragement and learning regarding faith-related things, but as noted above there are also sociological benefits. We're not as connected as we used to be, to our own detriment. The church, insofar as it is intentional about community building, can be one such place of connection that nurtures our emotional health as well as our spiritual health.

For example. Aaron Smith grieves not being part of a church any more. But he has good reasons for leaving, too:


I find myself in the process of grieving church these days. These days, the wound has been reopened, and the flood of emotions is back. I miss church. I’m angry at the church. I’m depressed at the lack of church community I have in life. I accept that things will never be the same again. I grieve over the church and the life, maybe even the faith I once had.

Sometimes I think I can bargain, can find a way to go back to the way things were. I imagine leading worship again, delivering sermons, expounding on scripture. Then reality comes crashing into my daydream with another sex scandal, abuse accusation, and always the manifestation of marginalizing. As long as people that I love aren’t allowed to sit with me in the pews without judgment over their identity, gender, sexual orientation, and life choices, there will be a thorn in my side that prevents me from becoming rooted again. I grieve this.

I grieve what we have done to people, how the abusers are welcomed back to the pulpit with open arms while the victim, the survivor is pushed to the side and told that they must forgive. In other words, they must act like it never happened. Is it a wonder the abused and tattered don’t stay? When we force them to live in “harmony” with their abusers (who still hold power and authority), we force them to acknowledge that their pain doesn’t really matter to us.

Along with the many people who have left churches in the name of some form of individualism, there are many who have left because they wanted connection to community, but actions and attitudes both conscious and unconscious told them they couldn't belong. That indeed is something to grieve.


As a pastor in the United Church of Christ, I believe that the UCC makes a real difference in the world. But what difference, exactly, is that? And how do I (or any of us) know that?

For nonprofits (including the church), one way to describe the difference that you make comes from statistics. And last month, congregations across the UCC shared some basic statistics with the wider denomination. Our churches filled out annual reports about average attendance for worship last year, how many new members we received, how many children participated in faith formation, what our income and expenses were, etc.

This exercise is common to most denominations, but it’s capacity to give meaningful information about the health of a church or a denomination has been questioned in recent years. In 2010, Stephen Sterner, former Executive for the UCC’s Local Church Ministries, said, “We’re not looking at church membership as much as we used to as an indicator of vitality.” Pastor Carey Nieuwhof writes, “Having been in church leadership most of my adult life, tracking numbers has done a number on me too, both positively and negatively.” More recently, the UCC’s Kristina Lizardy-Hajbi published an article based on extensive research which revealed that size, growth, and numbers do not equal church vitality.

Are categories like “attendance” and “income” the right things to be counting? In addition to these categories, might the wider church also want to count numbers related to mission activities (e.g. how many meals did your church serve at a local homeless shelter last year)? And is counting this stuff even the best way to assess what difference the UCC (or any denomination) makes?

This question and approach has been around for quite a while. There are other ways to measure vitality of a church besides attendance and money. Pastor and church consultant Michael Piazza also favors this approach, suggesting that churches measure out the cost and hours and human energy invested into things like Christian education programs and service projects to help people see how far stewardship can go. Asking this at denominational levels can help us see the effectiveness (or non-effectiveness) of attempts to connect and resource entire congregations as well.

Yep. David Hayward, aka the "Naked Pastor," shares this cartoon. It's not an original idea, but that it still needs to be said shows that the idea is still warranted. 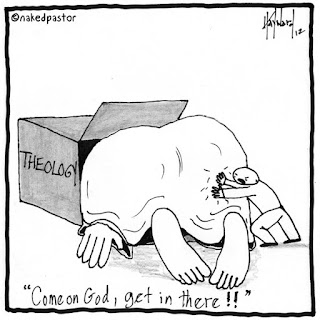 Misc. At McSweeney's, Wendi Aarons is going to close a business deal using words she's heard corporate dudes in airports yell into their phones. Timothy Brown has his own take on what is causing clergy shortages. Amy Frykholm on how pastors are healthier than we've been led to believe. Juhem Navarro-Rivera on the "Nones" helping cause the decline in white evangelical demographics.