Closing time. After this month, I am retiring this blog feature. I think Small Sips has run its course and it's time to envision something new. Maybe it'll get a reboot sometime down the line, but for now I'm letting it go.

The name Small Sips lives on, however, as that's what I've entitled my new author newsletter, which you should totally subscribe to.

Well. It's true. Jan Edmiston reflects on how hardly anyone cares about what mainline denominations do:

And even Church People care at different levels about Church World:

This list is a fantastic summary. The vast majority of people I've been in ministry with over the years have been Level 2 at best, a smaller circle at Level 3, and handfuls at Level 8 (which could be re-ordered to be Level 4 or 5...people in churches where I've been pastor could name at least one of our Association Ministers but wouldn't give up a Saturday or vacation to travel to meetings).

So what's that mean? It means that local churches are mostly known by what they do in their own communities, save for when the denomination they're affiliated with makes the news for taking a controversial stand on something and then they're lining up to talk to their pastor about it (congrats, you've briefly achieved Level 10!).

It also means that even most members don't care about wider church things because 95% of the time it doesn't affect the ministries that their church offers. That 5% exception is for when a local church will adopt or adapt a program or curriculum their denomination suggests or produced.

Of course, I'm speaking from a Congregational tradition. If your mainline church is more hierarchical, mileage varies.

But all ministry is local. And the more mainline churches focus on those local contexts, the more they might be willing to care about higher levels.


The gold standard for church leaders — the Master of Divinity — is losing some of its luster to its humbler cousin, the two-year Master of Arts.

“People are trying to get the training they need and get out,” said Robinson, 28, who graduated Friday (May 11) from Southeastern Baptist Theological Seminary in Wake Forest, N.C. “It all boils down to time and convenience and the culture and lifestyle we see today.”

A new projection from the Association of Theological Schools, the main accrediting body for seminaries in the U.S. and Canada, finds that the number of seminary students enrolled in various Master of Arts degrees will likely exceed the number of Master of Divinity students by 2021.

This reflects several things. First, many traditions don't require M.Divs and are fine with MAs. Second, The MA is a more versatile degree that perhaps can be appealing to a wider variety of professional opportunities.

Whether this will have any implications as mainline denominations increasingly make changes to requirements for ordination--including making the M.Div an option among others--is yet to be seen. Such things will likely be considered case by case, person to person. But the appeal of a 2-year degree that covers a lot of the same academic bases as a longer professional-oriented degree will seem like a no-brainer for a lot of candidates, especially if certain processes will differentiate less and less.

No lies detected. In a post from last August, Natalie Patton shares eight cliches that Christians use to get themselves out of caring for others. Here's one appropriate to the times:

Or: "I don’t have anything against black people/Hispanics/Arabs/Muslims..."

How This Lets Us Off the Hook: "I believe God loves all people, but don’t ask me to invite any of them to my dinner table, frequent one of their businesses, send my kids to school with their kids, or live in one of their neighborhoods! I'd like to stay comfortable in my holy huddle."

Growing up in Arkansas, I’ve heard generous, well-intentioned church people say this too many times to count. We say that we love everybody, but our actions don’t really show it. We live in different neighborhoods, go to different schools and churches, and frequent different businesses. Jim Crow doesn’t have to enforce it — we do it to ourselves. But racial tension is growing like cancer in America right now. How should the church respond? What’s our role in all of this?

What would it look like if the hands and feet of Jesus embodied a theology of justice — of grace and redemption to all people, and we started seeing ourselves all on the same side of the equation of grace?

The rest of the list is very good as well, with a lot of the usual suspects named.

And with this, we say good night. A cartoon from David Hayward: 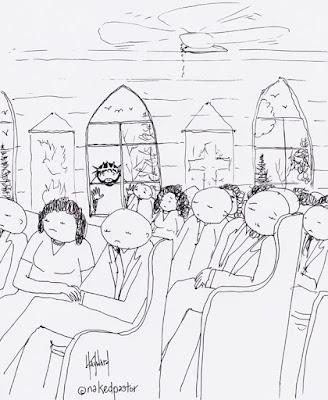 Misc. Chaplain Mike at Internet Monk on finding an oasis in a mainline congregation. Here's another poll showing Protestants are declining and "nones" are rising. Actor Ryan Reynolds opens up about his struggles with anxiety.
By Jeff Nelson
Email ThisBlogThis!Share to TwitterShare to FacebookShare to Pinterest
Labels: Church, Small Sips, United Church of Christ
Newer Post Older Post Home