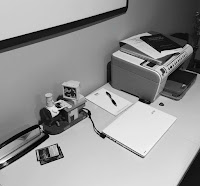 Previously: The Taskmaster, The Meeting, The Sitdown

The hour is late. The rest of the family has tucked themselves away for the evening and a quiet has settled over the house after the usual rush of activity. Despite the beginning of summer break, nothing today felt less busy: we'd still both gone to work and taken kids to daycare or day camp, and the four of us after a quick dinner had shuffled off to an evening of karate classes.

But now all of that is finished, and I'm not quite ready to sleep. This will be my first moment to sit, and to write, so I will take advantage.

I pour a glass of pinot to assist me, reasoning that it may loosen me up enough to let the creativity flow. As I pour, I recall various articles I've read arguing against such a notion, and I chuckle as I admit to myself that this is more about relaxation than brainstorming.

I forego my usual spots in the living room or den, and open the basement door. One of the cats sneaks past as I descend the stairs while juggling my wine glass and the laptop. The wood offers an occasional creak to mark my progress.

At the bottom of the stairs I open the door to my personal office space. "Office" is perhaps too generous, but it has often served as a place out of the rest of the family's way. Large pieces of my books have been born in this room, at a portable table from Target that serves as my desk. Sports memorabilia and movie posters serve as silent witnesses to my appearance, enveloping me in a sense of ownership about the room.

I set down my materials before settling into my chair. After a sip of wine, I open my laptop. Before I can enter the password for access to my files, I see his reflection in the dark screen.

I sigh as I swivel around to face him.

He's seated in the old gliding chair in which I once rocked both my kids, which I'd moved down here a few months ago. His legs are crossed and his hands are casually folded in his lap as he offers a slight smile.

I reach back to take a sip of my pinot. As I do so, I note that he already has a glass of his own.

He nods to the Derek Hess print leaned against the wall next to my table. "You ever going to hang that up? It'd look way better on the wall."

I glance at it. "I haven't figured out where to put it yet."

His smile grows a little. "I know. But you know it'd be better to put it up down here. It'd be a bit unsettling to guests upstairs."

"Yes, thank you. I've thought about this quite a bit."

He raises his hands in surrender before he picks up his glass and sips. He closes his eyes as he swallows, and when he opens them again he looks back at me.

Fine. I'll do this. "You know, the last time you were here, we weren't exactly buddies."

"And what you said to me hasn't happened."

"So you're here to admit that you're wrong and apologize, right?"

He bites the inside of his lips as his gaze wanders to the ceiling. I just keep looking right at him.

His eyes meet mine again. "Okay. Things didn't pan out as I feared. I was mistaken. And that's good in a way."

"It's good in a way, because it means you were never swallowed up by trying to be big time and neglecting what started it."

"I was never swallowed up by being big time because I never became big time. I thought the first book would lead to more and it didn't. And I've always thought that my other writing would help people find the book."

I can tell he's trying to read between the lines, his eyes probing for body language.

"What are you looking for? Is this where I'm supposed to admit that things that I thought were coming never came true? That I was as wrong as you were?"

He breaks eye contact to pick up his glass again. He takes one sip, then another, as his brow furrows. Rather than set it back down, he nestles it between his hands.

"I'm not here just to apologize and I'm definitely not here to gloat. I was hoping for bigger things, too. I just didn't want you to lose sight of other things."

"And you didn't, yes. You and I are on the same page with the whole 'keep writing to draw attention' thing. That's part of why I showed up here the last time. It was going to keep being important. We both knew it."

"And I'm still writing elsewhere, too. I remember you didn't like that too much, but I'm still doing it. And I've got the little podcast gig now, too."

I don't want him to be able to talk too much. "And hey, you may have missed it, but I've got not one, but TWO books coming out in a few months. Wow, look at me juggling multiple writing obligations at once! Who knows where it'll all go?"

He glances again at the ceiling. "Careful, you'll wake the family."

I roll my eyes and take up my own glass again. "I'm just saying that there isn't a whole lot to get on my case about this time around. On the other hand, you're interrupting my writing time, which is pretty ironic if you think about it."

"Yep, I did that on purpose, actually."

"You don't make any sense."

"It will, if you actually let me talk."

I sip my own wine and cup my glass in a manner just like his. I raise a hand in invitation. He watches me in silence before continuing.

"So. Let's take a moment to step back and see where we are. First book: done. Not bad. And yeah, the blog continued on its merry way uninterrupted. Congrats. I'll say again that I was wrong, if it helps. And yeah, just like you said, book two is coming, and book three already as well! And hey, you've got a newsletter now! And I know you're working on that other thing just for them, right? Meanwhile, you've got a speaking gig here and a signing over there. And that's to say nothing of the social media stuff you're always trying to drum up interest in. It's busy. Constant. Unending."

I mockingly raise my glass in a toast.

"And you've never let up on your posting schedule. All that other stuff has just been piled on top of it. You're becoming busier and busier, to say nothing of the church stuff and, oh yeah, the three sleeping upstairs. But this blogging and writing stuff is coming along, even if you're not turning into a superstar."

I tap the side of my glass, waiting.

"But now I'm concerned about something else."

"Of course you are."

"I'm concerned that you're getting tired."

I feel a sudden warmth in my cheeks. At first I think it's the wine, though my glass is still half-full. He watches me; the look on his face feeling like it's drilling deeper and deeper the longer this silence hangs between us.

"You don't have to answer this question right now, but even though you've kept the same schedule, have you been enjoying what you're doing? Like, why do you keep at it, aside from trying to draw attention to the book? Or books, plural, I guess."

The warmth in my face has not abated. I look down at the dark red liquid I'm holding, watching the overhead light's reflection move back and forth. I see him raise his drink to his lips in my peripheral vision.

"That's really all I came to say. And from the look of it, I've said the right thing."

I move my eyes to my bookshelf and to the displays on the wall. I still feel him watching me.

"The treadmill. The never-ending treadmill. I know you know what I mean. Keeping all those things in the air all the time in the name of 'platform' or whatever? It's frustrating, especially when you don't get the results you expected. But you keep going. And for what? For what, exactly?

"I don't know. I'm just...I'm wonder if the last time I was here, if I was wrong to push you the way I did. That's not on you, that's on me. And again, heaps and heaps of apologies."

I take another sip because I don't know what else to do. He watches me for a few more seconds before draining his glass and setting it on the side table.

"I'm just raising the question. But you've already been asking it. I'm worried about this for both of us, man. I really, really am."

Even after he leaves, I still haven't looked up. I swivel back toward my desk and look at the black screen of my computer. I close it and slowly make my way through the rest of my wine in silence.
By Jeff Nelson
Email ThisBlogThis!Share to TwitterShare to FacebookShare to Pinterest
Labels: Blogging, My Journey (so far), Writing
Newer Post Older Post Home