I read Denial is My Spiritual Practice by Rachel Hackenberg and Martha Spong, a collection of personal reflections on personal struggles, failings, and hopes that each has experienced in life and ministry. Some essays were painful to read, as each shares moments of uncertainty, rejection, abuse, and second chances in relationships, where each has sought new beginnings after what seemed so certain has crumbled or become unreliable or unsafe. The title refers to the changes and revelations that have come for each when they have finally admitted to themselves certain truths about themselves or situations in which they are immersed. I don't know if "enjoyed" is the right word, but I was certainly moved by what they shared.

I read I'm Still Here by Austin Channing Brown, a memoir about her experiences as a black woman in mostly white spaces. What struck me most was her description of the behavior of white people who think of themselves as allies. She describes times when people will claim to be so right up to the point when something happens and they'll try to explain it away, or when after a talk people will use her as a "confession booth" of sorts to seek forgiveness for their ignorance or for times when they'd let something hurtful slip. While reading her experiences in general was eye-opening and informative, these accounts helped me see what not to do or how to be better.

I read Christ in the Psych Ward by David Finnegan-Hosey this summer, which is part memoir, part spiritual reflection on the author's struggles with mental illness. He's a very good writer, and he's able to balance his own experience with larger issues related to supporting people with mental illness from a faith perspective. He doesn't offer up easy or pat answers; rather, he can be brutally honest in what it is like for many who not only are seeking help but have to deal with those around them who don't understand what they're facing. But there's also a theology of hope that guides his writing: he pulls from scripture and other thinkers to show how God cares for those struggling with these illnesses, while also showing how damaging certain theological views and Biblical interpretations can be.

I read a pair of novels by Cherie Priest this summer called Maplecroft and Chapelwood. I'm a big fan of Priest's Clockwork Century steampunk series, and wanted to check out other stories of hers. These two re-cast Lizzie Borden as a detective of sorts, first investigating a strange affliction that changes people into violent creatures obsessed with the ocean. Among other victims were her parents, which led her to those killings, and many others in her town. The second book calls her far away from home to see what's behind a strange religious cult in an Alabama community, which recalls certain aspects of her earlier experience. Both books are written in a style reminiscent of Bram Stoker's Dracula, as each chapter is a journal entry or other written account from different characters' perspectives. I hope that there will be more of these.

I recently read and reviewed God and Hamilton by Kevin Cloud. You can read that here.

I also read and reviewed Outside the Lines by Mile Kim-Kort. You can read that here.

My son and I went to see Solo: A Star Wars Story shortly after it released. As people familiar with the Star Wars franchise could guess, it's an origin story for one of the original trilogy's three main characters, and includes many of the plot points one would expect: meeting Chewbacca, meeting Lando, making the Kessel run, and acquiring the Millennium Falcon. I don't feel like mentioning any of that is spoiler-ish, because again, most people would anticipate this movie incorporating them. Aside from that, Solo makes a lot of use of the "don't trust anyone/no honor among thieves" theme, and there are a few genuine surprises. But for the most part, the movie was pretty straightforward and predictable.

I watched Molly's Game, starring Jessica Chastain as Molly Bloom, a former skier whose Olympic hopes are dashed after an accident and tries to hit reset on her life in Los Angeles. She finds work as an assistant to a powerful person entertainment who runs a poker game, and who enlists her services to keep track of the buy-ins and earnings. Molly eventually begins her own high-stakes games, with ups and downs along the way, several "downs" of which involve being threatened by mobsters and raided by the FBI. Chastain is brilliant in the title role, and the supporting cast includes fantastic performances by Idris Elba, Michael Cera, and Kevin Costner as well.

I watched Lady Bird, starring Saoirse Ronan in the title role as a senior at a Catholic high school trying to navigate her way through friendships, an itch to explore the world beyond her hometown, her family's financial struggles, and her contentious relationship with her mother (Laurie Metcalf). It's a nice coming-of-age story that realistically portrays the ups and downs of teenage self-discovery.

We went to see Ant-Man and the Wasp, where Scott Lang (Paul Rudd) is under house arrest after he helped Captain America in Civil War. Not only that, but Hank Pym (Michael Douglas) and Hope Van Dyne (Evangeline Lily) are mad at him because his actions have caused them to go on the run as well. In the meantime, Pym and Hope have been working on a way to get the original Wasp (Michelle Pfeiffer) back from the Quantum Realm. But some new threats in the form of a ghostly adversary and some organized crime guys throw all of that off and cause the old gang to get back together. This was a fun and often hilarious movie that tied multiple stories together very well, as well as provide a nice lighter palette-cleanser after Infinity War.

I watched The Shape of Water, which I was totally preparing to be contrarian about because it won a bunch of awards and most people I know who've seen it have fawned over it. But now I understand why it has received so much praise. Sally Hawkins plays Elisa, a young mute woman who works as a cleaner at a 1950s government facility and who hangs out with her lonely apartment complex neighbor. After a mysterious project is moved to the place where she works, her curiosity gets the better of her and she ends up beginning a relationship with the amphibious man being kept there. I was pleasantly surprised by this film's originality and charm, and while parts of it were definitely weird, it at least was an original kind of weird.

We watched the 5th season of Arrested Development this month, where the entire cast and assorted side players come back to resume their dysfunction. I am a huge fan of the original series and thought the 4th season revival was well done, but something felt off about these latest episodes. A lot of the jokes took a long time to set up and many interactions kind of meandered without much of a payoff. A lot of the snappiness just wasn't there this time around.

I watched the entire series of Penny Dreadful the past few months on Netflix. Originally airing on Showtime, it was a series set in Victorian London that combined characters from many of the classic horror stories such as Dr. Frankenstein, Dorian Gray, Dr. Jekyll, Dracula, and Van Helsing, along with many original ones as their tales intertwine to tell new ones together. Eva Green, Josh Hartnett, Billie Piper, and Timothy Dalton head an incredibly talented cast that bring these stories of vampires, witches, werewolves, and demons to life. When I got to the end, I was sad that they'd ended it after three seasons. It deserved 3-5 more and I gladly would have watched all of it. 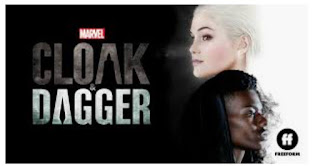 I kept up with Marvel's Cloak and Dagger on Freeform over the summer, starring Aubrey Joseph and Olivia Holt as the title characters. The first season was an origin story, placing both as teenagers just discovering both their individual powers and their connection to each other. Each is also working through personal tragedy, as Tyrone (Cloak) is trying to prove his brother's murder and Tandy (Dagger) is trying to find out what happened during a fatal accident that killed her father. It was reminiscent of the Netflix Marvel shows, with its "street-level" vibe, albeit perhaps geared toward a slightly younger audience. I thought it was well-done, and look forward to season 2 next spring.

I gave in to curiosity and watched season 1 of Legion this summer, mostly because I discovered that Aubrey Plaza is in the cast. We meet David, a man who theoretically has been suffering from schizophrenia most of his life, only to eventually discover that his troubles actually stem from 1) being an incredibly powerful mutant, and 2) a parasitic ancient being taking up residence in his head. David eventually finds allies in a secretive group of fellow mutants to help get to the root of his condition while also keeping a government group wanting to capture him at bay. This show is very trippy, but after a while I was able to keep up with its general aesthetic. I know there's been a season 2 but it doesn't seem to have been released on DVD yet. I look forward to when that happens.

Finally, the 6th season of Orange is the New Black released on Netflix in late July, which picks up in the aftermath of last season's riot. Litchfield's inmates have been separated out with some going to its maximum security facility and others being shipped off to other places around the country. This season focuses on those who have ended up in max and have to adjust to their new surroundings, which are largely dictated by a feud between two inmate sisters who run separate cell blocks. Accompanying this are an investigation into which inmates to blame for the riot and for one guard's death, as well as other guards trying to cope with PTSD from their being taken hostage during the riot as well. All in all I thought it was a better season than the last, with familiar characters trying to cope with their new situation. New characters didn't always land with me and I at times found myself wanting more of what the show chose not to focus on, such as the trial or even some of the guards' struggles. The shine has come off this show a little for me, and that's too bad, but I'll be right here next summer waiting for the new season.

My musical summer began with Come Tomorrow by Dave Matthews Band. The album encompasses a wide selection of previously unreleased songs and brand new ones, with four different producers credited with helping. The sound from the band's earliest work is gone in favor of a more straightforward rock sound, with simpler arrangements and at times with anybody besides Matthews nowhere to be found. After losing violinist Boyd Tinsley, some of this was to be expected. Whereas the last two albums seemed to promise a return to an earlier beloved sound, this one presents their current incarnation. Here's the first single, "Samurai Cop (Oh Joy Begin):"

Another favorite, Florence + the Machine, released a new album called High as Hope. Florence Welch is as passionate as ever, yet also very focused in tunes such as "Big God" and "Hunger." Here's "Big God:"

Electronic duo Phantogram released a pair of singles called Someday/Saturday, the former being an original song and the latter being a cover of a Sparklehorse song. Proceeds from purchases go to help suicide prevention. Here's "Someday:"

I've been listening to and enjoying "You're Somebody Else" by Flora Cash quite a bit this summer, which is off of an album they released last year called Nothing Lasts Forever (And It's Fine). Here it is: