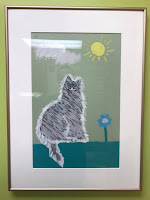 Whenever we take one of the kids to a doctor appointment, I'm always fascinated by one feature of the rooms in which patients are invited to sit. Each room--as well as the waiting room, hallways, and elsewhere--has a piece of art much like the one to the left, made by an elementary-age child.

Whether painted or drawn, these pictures always have a small paper next to them noting the artist's name, age, school, grade, and the year that it was made. So, for instance, this cat picture was made by an 11-year-old in 5th grade in the year 2000.

The point of fascination for me is that somewhere in the world there is now an almost 30-year-old person who may or may not realize that something they drew in elementary school is still hanging in a doctor's office, seen by dozens of people every week.

Aside from that, this picture hangs in this room for another purpose: to bring comfort to scared patients. Visiting the doctor can be frightening for adults, but perhaps moreso for children. So these pieces of art help bring something familiar, something created by someone close to the patient's age, to comfort them in a strange place where they might rather not be.

One could say that the purpose of any piece of art is to inspire, provoke, or invite a response. Most art isn't just for art's sake. Rather, it is to be shared and received, to provide comfort, joy, or challenge; to give voice or call attention to something that many may wish to overlook or didn't realize was happening or existed.

In other words, most acts of creativity are in the service of something.

Unfortunately, the church has not often been at the forefront of creative thinking. There have been many instances throughout its history when it has discouraged creativity rather than encouraged it, and times when it has gone to great lengths to stifle or squash it rather than call for more of it.

Many in the Reformed tradition of which my denomination, the United Church of Christ, is a part, abolished stained glass windows. Originally conceived as a way for people who couldn't read to learn the stories of scripture through images, many churches post-Reformation thought they were too distracting from the Word preached. Just as one example.

And yet, the Bible is full of creativity. The texts that Christians claim are filled with creative moments that should inspire us to our own.

Genesis 1. God creates the heavens and earth and even takes a day to sit back, rest, and enjoy what God has made.

Genesis 2. Adam is given an active role in the creative process by getting to name every living creature as they parade in front of him.

The Psalms, many of which are attributed to David and which span the spectrum of human emotion in expressing feelings of gratitude toward God or calling God out during dark times when it doesn't seem like God cares.

What we usually call the "wisdom writings." Where Solomon and others in Proverbs, Ecclesiastes, and Song of Solomon observe what life is like and share them with others.

Jesus was very creative. He'd often tell these stories called parables where he'd pull from people, objects, and experiences in everyday life to tease people's minds into thinking about the new way that God calls us to live in the world.

Each of these acts of creativity were in the service of something.

As one further example, we meet a Syrophonecian woman in the Gospel of Mark whose daughter is sick. Jesus has gone to great lengths to try to hide from people. He's been healing and teaching, and interacting with large crowds for quite a while and needs to recharge for a bit. So he hides out in a house where nobody can find him.

Except this woman has been watching. She's used every bit of creativity she has to track him down because she knows, she trusts, that he has the ability to heal her daughter. So she barges in to where he is staying and she makes her request.

As mentioned, Jesus is tired and doesn't really want to be around anybody. So he responds to her by saying, "It's not right to take what is meant for children and throw it to the dogs."

(In case you missed it, Jesus just called a woman of a different ethnic and religious background a dog. We could and should pause to think about that.)

But the woman has no time. She may have just been called a dog, but in reality she is a lioness looking out for her cub, so she claps right back by saying, "But even dogs eat scraps from the kids' table."

Something about this creative and persistent response brings Jesus to himself. Whether he now fully realizes how he's been treating this woman or whether he recognizes the depths of her faith causing her to persist in this matter, he responds, "Okay, your daughter is healed. Go home and be with her."

People of faith are called to holy creativity. We should more readily break the Church's historical tendency to discourage it and instead use it in service of what we're called to do and be in the world.

That includes mission, where we assess the needs of our neighborhoods and then brainstorm responses to them.

That includes worship, where we think about what engages people and make changes that may be new while also remaining faithful.

Christians are called to holy creativity, in the service of God and one another.
By Jeff Nelson
Email ThisBlogThis!Share to TwitterShare to FacebookShare to Pinterest
Labels: Bible, Church, Creativity, Ministry
Newer Post Older Post Home