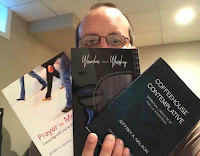 When Coffeehouse Contemplative was released two years ago, I felt like I'd reached some sort of writing pinnacle.

I'd started this blog in 2005 and while I didn't initially think it would be anything more than a fun exercise that I'd eventually tire of keeping up, I became more serious about this craft over those first few years. I was seeing other bloggers that I admired publishing books as a direct result of their blog work, and if I wasn't going to land my own deal specifically because of this space, I figured I'd at least try to improve my writing enough here to justify to myself and others that I could pull off an entire book.

So if you had told me back near the beginning that I'd publish my first book just over a decade later, I would have been elated.

If you had then told me that two years later I'd publish two more within months of each other, you probably could have knocked me over with a feather.

I didn't intend for things to happen that way. I've told the story several times about how this came to be, which just comes down to timing and fortune.

I pitched the idea for Wonder and Whiskey, it got kicked around for a while, and then I didn't hear anything for a long time. Figuring that that possibility was dead, I started work on my idea for Prayer in Motion and received some serious interest pending the writing of a full draft. Near the end of writing that, I received an offer to publish Wonder and Whiskey.

And so here I am, now a three-time author, closing out an amazing year that back at the beginning of this blogging thing seemed a pipe dream at best.

I don't know where to go from here. I'm sure I have more books in me, but I'm content at this point to be thankful for where this journey has led.

All that said, here are what I think are my "greatest hits" from another year of blogging:

Five Hard Truths about Being an Author

But First, Breathe (Defy the Trend)

Whatever length of time that you've been accompanying me on this adventure, thank you. I look forward to what the next year will bring.
By Jeff Nelson
Email ThisBlogThis!Share to TwitterShare to FacebookShare to Pinterest
Labels: Blogging, Book Stuff, Writing
Newer Post Older Post Home