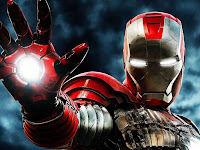 For a handful of different reasons, this post from May 2017 has come back to mind recently, and not just because of the new Avengers trailer. The church these days is becoming an evermore challenging place to work, and I'm constantly fighting the urge to strap on my armor and try to save it on my own.

I had a dream last week. I was at a church, which didn't look like the church that I pastor but I knew that it was my church in that way you know things in dreams.

I was about ready to lead worship and was heading from my office down to the sanctuary, but in my dream I wasn't wearing my usual alb. Instead, I was wearing Iron Man's suit.

And that was it. I don't remember actually talking to anyone in my dream and I don't remember what the worship theme was or what time of year it was or anything. I just remember that I was standing in a church--my church--in Iron Man's suit.

I have a lot of dreams where I'll think about them for a few minutes after I wake up and then let them fade from my memory, but every so often I have one that seems to demand that I let it hang around for a while. These dreams seem to want me to consider their implications, like my subconscious is working something out and I need to keep processing it in wakefulness in order to resolve it properly.

So why was I flying around as Iron Man in a church? I have a few ideas, but I have to give some background for it to make sense to anyone else.

My first few years of pastoral ministry, I was hit square in the face by the reality of the Church's situation. Not just my particular church, but the Church with a capital C, although my church was a microcosm of those larger issues.

I could see how played out certain forms and traditions were, how lackadaisical people had become about doing them or justifying why they were done at all.

I need to say early that this wasn't, and isn't, just about worship. That's still the big third rail issue in a lot of places (and on a lot of blogs), and these issues did manifest in that area as well, but it wasn't just that. It was how we organize, how we teach, how we reach out to the community, how we think about serving in mission.

When I started in ministry, it all seemed to be changing. What little theory and practical experience I received in seminary both wasn't an adequate amount, nor did it account for these deeper problems that seemed to crop up so fast after starting my first call.

So I had to read. I had to educate myself both on the ground and to understand why certain things were happening. I read about cultural shifts, the end of Christianity's dominance in societal spheres, the crumbling assumptions about shared values and practices in the marketplace. And I read about people and places that were doing something about it, trying new things like increased approaches to technology, utilizing pop culture as entry points, starting fresh without any of the traditional norms.

I tried some stuff myself. Some of it worked and some of it didn't. But along the way I explained why. I tried to share what I'd learned about these changing times. Some of it took root, I think.

By the time I ended my first call, I thought I'd learned some things. I thought I was better prepared to do this again in a different way someplace else.

But it all seems to be happening faster now. The number of activities competing for people's time and attention seem to have increased exponentially. The "spiritual but not religious," "nones," and "dones" are only becoming more numerous. I just found out this last week that not only do I need to keep worrying about Millennials, but I already have to start worrying about the generation after them, too.

Individuals and families in my own setting are just as caught up in all of this. I'm watching it happen in real time; it's not just something happening out there.

At some point, I just accepted that this is how things are. I stopped panicking and just started trying to live into it. And I'm not sure exactly when. But maybe that's good. I don't need to pinpoint the moment I stopped thinking so consciously about it and kept showing up to work every day, hoping to respond to it as best I can.

Every once in a while, I become surprised all over again. I become surprised at how much the church has to compete with, how dominant technology and online methods of interaction have become, how forceful some are in expressing that what we're doing isn't enough for them or that we should be changing faster.

And while I wait for that surprise to finally wear off again, I show up. I show up, and I keep asking how we can do things differently. Faithfully, but differently.

As I've done this, I've struggled with two issues that inevitably have only made this adaptation more difficult. The first thing is that I try to do it all myself, as if I'm wearing a protective armor where I know what I'm doing and nobody else could possibly do it as well. And the second thing, because of the first, is that I end up thinking and acting as if the church is mine to save all on my own, as if I'm a superhero flying into battle.

I've also learned what happens when I try to do it all by myself. I stretch myself thin, I cut corners with my self care, I take the burden of the whole damn church onto myself because I think I have to, and I block others out while I do it. And then I get frustrated and tired and resentful and I end up being no good to anybody.

So here's where Iron Man comes in. He wears protective armor before flying in to save the world from some grave threat. And here I was in a dream, wearing that exact armor flying into the church presumably to preach and pray and read the Bible, but probably also thinking I need to save it all by myself.

I know the old thoughts and habits. They're creeping up again even as I thought I'd learned my lesson. I'm trying to be the church's superhero in the face of rapid change, and it's not going to go well if I try to do this by myself.

I think my subconscious knows this, wanting me to get out ahead of it before things get bad.
By Jeff Nelson
Email ThisBlogThis!Share to TwitterShare to FacebookShare to Pinterest
Labels: Vintage CC
Newer Post Older Post Home