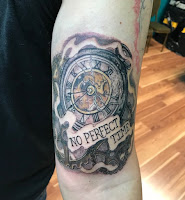 On my worse days, I take to thinking that my life is now half over.

According to the CIA's website, the average life expectancy in the United States is 80 years old. The Social Security Administration is more optimistic, estimating that the average man in the U.S. will reach 84.3, assuming he reaches age 65 first.

I've been thinking about this milestone of turning 40 for at least a year, and I finally reached it this past Saturday. I anticipated it with both excitement and dread, as many often do when faced with such a clear reminder of time's passing and of favorite seasons of life getting more distant behind you.

Some of those seasons I don't miss one bit. I'm glad that I never have to go through 7th grade again, for instance.

There are a lot more phases or single moments that make me wince but that I can credit with my formation in the long view. I'd reconsider how I handled them or whether I had to go through them at all, but I can see how my sense of self has benefitted from them. It's the old "I wouldn't change a thing about how I got here" trope, except, c'mon, there'd probably be a few I'd at least consider.

So now I have 40 years of all those seasons behind me, the cherished ones I sometimes wish were possible to revisit and the ones I'd be fine with striking from the record without changing the life lessons I learned as a result. And by most estimates, I have roughly 40 more ahead if all goes well enough.

On my 39th birthday, my wife asked me if I was going to freak out on the next one. I admitted that I probably would. But now that I'm here, I don't feel all that bad, to be honest. It's a big milestone and it comes with signals and cause for reflection, as well as some recommendations for a few more trips to the doctor to get body parts checked on a regular basis.

But there's a certain freedom to 40 that I've already been leaning into. I can't give an exact term for it, but it involves some mixture of more honesty, less concern about others' judgment, being more forthcoming about things I do or don't want to do. Maybe "less pretense" is the easiest way to describe it. You feel a greater need to put on a show in your 20s and 30s when you're just starting out in certain ways, and at least for me, I don't feel such a strong pull to do that now. I have to imagine that this only gets stronger over the next couple of decades.

Take the pic included with this entry, for instance. That was my Big 4-0 Birthday Treat to myself. It commemorates a moment that I had years ago, and unless I wear long sleeves you know it's there. And it goes with the one on my forearm that I got last fall quite well. I have four others, but they're all in places where unless I want you to see them, you won't. But now? Here it is, and in a larger sense, here I am, which includes this. It has always included this, but now I'm showing more and more of it.

I think that my fifth decade of life will have a lot of that spirit to it. Or at least I hope it does. After all, if this whole thing is more or less half over, it wouldn't make much sense to save all the best stuff until the very end.
By Jeff Nelson
Email ThisBlogThis!Share to TwitterShare to FacebookShare to Pinterest
Labels: My Journey (so far)
Newer Post Older Post Home