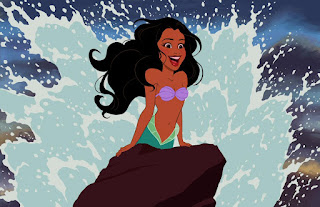 It's hard to predict what will go viral on social media.

You can type out something with careful precision, weighing every word, and have it go nowhere.

On the morning of July 4th, I read a little about the news of Halle Bailey being cast as Ariel in Disney's upcoming live adaptation of The Little Mermaid. My general opinions and feelings about these live action movies set aside, I could appreciate their casting a young, talented actress and singer for the role regardless of her race, as well as how it would offer a fresh and different take on the story.

After all, they did it with Cinderella over 20 years ago.

Predictably, not everyone has been happy with this casting choice. And as much as some have tried to couch their opinions in wanting to be true to the source material, it's just white people being mad that Ariel will be black.

If you’re mad that The Little Mermaid isn’t white, wait until you find out about Jesus.
— Jeff Nelson (@boldroastrev) July 4, 2019


If you've spent any time on Facebook, Twitter, or Instagram since then, there's a good chance you've seen it. Clearly something (several things) about it touched a nerve. Most feedback has been positive, but of course I've received some of the other kind, most of it containing no real substance.

Of the feedback I have received, at least two issues have arisen, which makes sense because the tweet combines two issues.

The first is the casting of Ariel as black after the image of her from the 1989 cartoon being the popular one for so long. There's a little bit of traditionalism happening here, but it's mostly about race even though critics are trying to swear up and down that it isn't.

Simply put, representation matters. It leaves an impact when children finally get to see characters new or classic portrayed by someone who looks more like them. After a long line of white male superhero movies, for instance, there were reasons why Wonder Woman, Black Panther, Captain Marvel, and Miles Morales in Spiderman: Into the Spiderverse were so well-received. It's because girls and POC children finally saw someone more relatable; someone they could look up to and call their own.

If you’re seriously upset about the casting of this new adaptation, you’ll always have the 1989 movie. In the meantime, fellow white folks, consider why this new production might matter to people who don’t share our skin tone. Consider how you may celebrate this not just for them but for the expansion of your own awareness as well.

And then there's the Jesus issue. I've heard from more than one person trying to argue that Jesus really was white, he just had a really good tan due to living in that part of the world. I've had people try to establish Jesus' ethnicity according to modern categories of race including how the United States census classifies Semitic people for its data. I've had people say that they've never met a dark-skinned Jew so obviously Jesus couldn't have had dark skin.

The first issue is the easy one: Middle-Eastern and Mediterranean people don't tend to have fair skin, blue eyes, and blondish hair like all the European paintings many Americans have grown up knowing. A study conducted by anthropologist Richard Neave did its best to recreate what a 1st Century Jewish Galilean might have looked like, and the results are the picture to the right: short dark hair, brown eyes, and olive brown skin. This may have varied in the region depending on the specifics of where people lived, but Jesus wouldn't have been white.

The second issue arises when one attempts to read modern categories back onto Jesus such as what we in the U.S. consider "white" or "non-white" today. In this country, for instance, lighter-skinned people get to be white until they don't. Many Jewish and Arab people who may be classified as "white" on the Census could still share stories of times when they've faced discrimination, micro-aggression, and violence.

We can talk about whiteness as a race, but people also use it as a mechanism for holding power; for determining who's in and who isn't. It determines who benefits and who doesn't. It's used as a system whereby people think that Ariel being white is "normal" and a black actress playing her is outrageous, and white male superheroes are "normal" and Wonder Woman and Black Panther are "pandering."

And the insistence that Jesus was white is less in the interest of historical accuracy and more as a way to have an icon for that power to determine who's included and what's normal. In these cases, Jesus becomes a weapon to wield rather than the embodiment of God's love, forgiveness, and salvation meant for all people regardless of race or societal status.

Jesus broke down the walls people like to put up around people's worth, and exposed the ways people of power perpetuate that divide. If that feels threatening, it's up to the person who feels threatened to examine why, rather than try to reinforce the status quo for their own comfort.