The Endgame of Grief 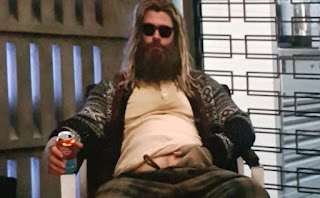 At the end of Avengers: Infinity War, both the audience and the characters are left in despair and uncertainty.

Thanks to Thanos' successful acquiring of all six Infinity Stones despite the heroes' best efforts to stop him, he goes through with his plan to wipe out half of all life in the universe. This is how Part One of the story finishes, a monumental cliffhanger that leaves everyone with the question of how the remaining characters could possibly undo what has happened.

As everyone expected, Avengers: Endgame picks up where we left off, still in that point of sadness and wondering how things will play out from here. And also as expected, a good portion of the movie answers the question in terms of what great plan they rally around to fix the results of The Snap (or, if you prefer from Spider-Man: Far From Home, The Blip). That answer includes getting the people still alive on board, a lot of time travel, a second Snap/UnBlip, and eventually (of course) a big climactic battle scene.

But there's more that the characters battle through most of the movie than just Thanos. Yes, they do plenty of that as well, but the first third to half of the film they have another adversary, just as formidable: their grief.

At the beginning of Endgame, the remaining Avengers are devastated. They are of course dealing with loss of friends and loved ones due to the Snap. They're also dealing with their sense of failure in not stopping it. And especially after their initial bid to reverse what happened comes up empty, their grief manifests in a lot of different ways.

Natasha Romanova/Black Widow tries to keep on like before as much as she can, acting as team liaison and director from Avengers Headquarters even though physical threats from enemies like before are no longer very pronounced.

Clint Barton/Hawkeye becomes a violent vigilante, going on a rampage of vengeance against mobsters and drug dealers with the reasoning that they truly deserve it as opposed to his Snapped family.

Steve Rogers/Captain America focuses on helping other grieving people, leading a support group and checking in with friends. He doesn't let on much about how this is affecting him.

Bruce Banner/The Hulk retreats from public life for a while to address his own inner conflict between his personas before re-emerging as a new, open, proud, and complete version of himself.

Tony Stark/Iron Man, after an initial cathartic outburst, accepts what has happened and begins building a new life with Pepper Potts, and bristles at any possibility that his newfound peace could be undone.

Thor is perhaps the most interesting and enduring exhibition of grief in Endgame. He begins the movie barely saying a word, and Rocket Raccoon has to clarify that the reason is he's pissed because he thinks he failed. He then lets his physical health deteriorate, turns to alcohol and video games in isolation, and forbids Thanos' name to even be mentioned in his presence. After beginning his part of the mission to reverse the Snap, he withers in the face of responsibility. He repeatedly breaks down in open displays of sadness. His grief is the most outward and pronounced and persistent and debilitating.

We see all these ways of coping with loss in people around us. Some choose to throw themselves back into work. Some become angry and vengeful. Some turn to the needs of others. Some try to reconcile inner conflict. Some do their best to rebuild and move forward. And some become paralyzed and isolated.

None of these are right or wrong, or the best or worst (well, except the violent revenge thing...that one's pretty much just wrong, although the expression of anger can be healing with the right form of outlet). Sometimes our own way of grieving bumps up against that of another, and we may deem the other's way inappropriate. And there may be times when some of these outward ways of dealing with grief are actually tactics to mask the effect of loss from ourselves or to others.

When attempting to move through our own grief, it is always best to ask why we do what we do. Why have we chosen to work so hard, or move the focus off of ourselves to deal with others' pain? Might we be trying to move on too quickly, or might we be cutting ourselves off from the support of people who love us?

There's no blanket right or wrong answer to these questions. Grief never completely disappears. We will miss the people we lose for the rest of our lives, and we respond to that at our own pace and with our own ways. But there are ways that are more healthy and less healthy, ways that do bring healing and ways that help us avoid healing.

What Endgame shows us is a handful of possibilities of dealing with grief. We may be able to see ourselves in one or more of these expressions, and ask whether they've been healthy or useful for us, or how we might adopt one or more going forward.