A Chance and a Choice 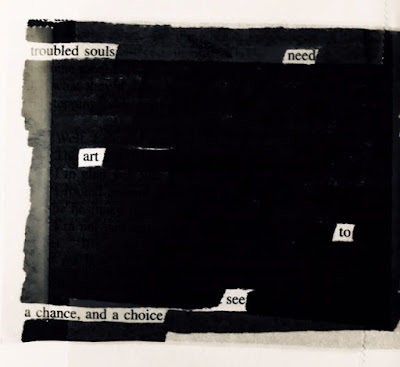 I recently was at a karate class where a fellow student didn't get a move quite right. One instructor asked the other, "Did she screw up?" And the other responded, "Oh, she was just being creative."

Sometimes--oftentimes--our mistakes can lead to greater creativity. They can certainly show us one less way to do something the correct or most effective way. But they can also open our minds to what we weren't able to see previously.

Plenty of worthwhile things have come from mistakes. Among other examples that could be listed, Post-Its and the teabag--items that many people use every day--began as mistakes.

For many, mistakes are often cause for self-flagellation. We spend time beating ourselves up for getting something wrong, for messing up the technique we're trying to learn, for a draft of some piece of writing or art or music not turning out the way we envisioned.

Our mistakes have plenty to teach us:


In their book Art and Fear, David Bayles and Ted Orland tell of a ceramics teacher who announced on the opening day of class that he was dividing the students into two groups. Half were told that they would be graded on quantity. On the final day of term, the teacher said he'd come to class with some scales and weigh the pots they had made. They would get an "A" for 50lb of pots, a "B" for 40lb, and so on. The other half would be graded on quality. They just had to bring along their one, pristine, perfectly designed pot.

The results were emphatic - the works of highest quality, the most beautiful and creative designs, were all produced by the group graded for quantity. As Bayles and Orland put it: "It seems that while the 'quantity' group was busily churning out piles of work - and learning from their mistakes - the 'quality' group had sat theorising about perfection, and in the end had little more to show for their efforts than grandiose theories and a pile of dead clay."

The world is often not looking for "grandiose theories." It's looking for art that can show them something of themselves or the world that either reflects its experience or offers a glimmer of hope. People are seeking signs that they have a chance and a choice; that what is does not always have to be.

Mistakes can show us better ways to do that. They can show us one less way to offer something good and life-giving to troubled souls. Or, alternatively, they can help us discover a way to do it not previously considered.

This blog post is even an example. I started out wanting to use the above blackout poem to say something else about art, and it turned into this. I hope that it's helpful to somebody.

So go forth and let yourself make mistakes. They may lead to exactly what you need to create or do.
By Jeff Nelson
Email ThisBlogThis!Share to TwitterShare to FacebookShare to Pinterest
Labels: Blackout Poetry, Creativity
Newer Post Older Post Home