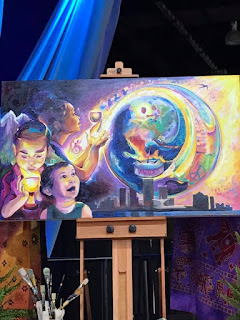 At the UCC's General Synod this summer, they had a series of theological reflectors who would offer commentary and summations of the day.

While in years' past these had been authorized ministers or trained lay leaders, this time they took a new direction by inviting an artist, musician, and poet to interpret the speakers and business items presented instead.

The first several days saw Milwaukee painter Tia Richardson off to the side of the stage working diligently on a canvas, which she presented to the gathering at the end of the second day:

As Friday and Saturday progressed, the canvas had transformed in a way that Richardson called typical of her work, changing from what she thought it would be to what it became. The finished image features three children, one holding a flame that shines on a symbolic world that encompasses many themes she observed, all hovering over a Milwaukee skyline. She said the light on the world changed as she painted, journeying to its opposite side on the canvas, a transformation that surprised her.

Richardson allowed both the gathering and the art to direct her brush, even allowing herself to be surprised. The finished product was part her own ideas and part what she heard and saw from the meeting as she painted.

I've had Richardson's painting on my mind the last few months since I attended Synod, and I've been playing with the idea of interpreting meetings through art.

Here are two pages from my notebook where I doodled during a Zoom meeting: 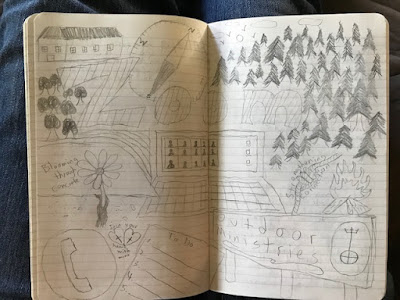 And here's one I did during the Ohio Conference Annual Gathering a few weeks ago: 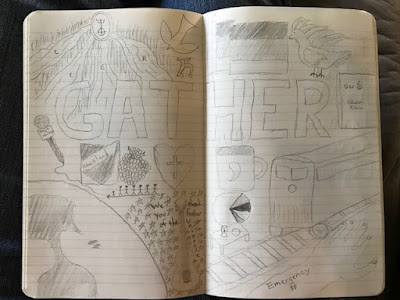 Everything on these pages is based on something I heard during each meeting. It helped me stay engaged in a different way and even weeks later I can remember what each element refers to.

In my book Prayer in Motion I discuss how there's a part of the brain that becomes bored if you just sit for a long period of time, which can make things like prayer difficult. But if you keep your hands busy fiddling with a trinket or in some other way, you're able to stay better engaged with what's going on. These times of doodling are becoming a new way for me to do that.

So maybe if you're someone who finds themselves in a lot of meetings, doodling what you hear can be a way to keep paying attention. After all, there's a reason why mandalas and theological coloring books are popular. Using artistic activities to interpret the mundane of your day, including how God is present, can be a powerful thing.

(My Association has their annual meeting on Saturday, so maybe I'll have a new page of doodles to share afterward.)
By Jeff Nelson
Email ThisBlogThis!Share to TwitterShare to FacebookShare to Pinterest
Labels: Creativity, Spirituality, United Church of Christ
Newer Post Older Post Home