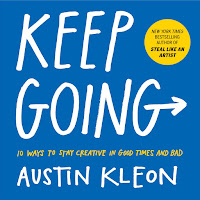 Would you believe that this is my 15th year of compiling these lists of my favorites? That says a lot about me, about how long I've been blogging and writing in general, and probably about some other things. But I like doing it because it allows me to look back and see what has stuck with me over the course of the year. So here's what most resonated with me in 2019.

1. Maid by Stephanie Land - I read this memoir of a single mother trying to raise a young child while barely scraping by on wages from a series of housecleaning jobs early in the year, and it has stuck with me. Land shows how difficult and complex a life of poverty actually is, and how simplistic judgments against people like her often are.

2. Keep Going by Austin Kleon - Austin Kleon has become a huge influence and inspiration for me this year, helping me to renew my own creativity and explore new artistic avenues as well. I've devoured all his books this year, but Keep Going was the first and, for me, the one that has resonated the most. Kleon shares all kinds of tips and tricks to tap into one's creative energy in a light, accessible format. I'm so glad I discovered his work.

3. Finding Your Own North Star by Martha Beck - I read this during my sabbatical this past June. Much like Kleon, Beck shares ways to tap into what brings someone the most passion and energy, as well as explore how one may use what one discovers to pursue one's true calling, whether career-wise or in other areas of one's life.

4. Wanderers by Chuck Wendig - This is, hands-down, the best novel I have read in years. A mysterious condition turns select people into a walking horde that cannot be deterred from wherever they are going. This turn of events has ramifications for the entire country, and for the world. I found this engrossing and timely, and despite its 800-page length, finished it in a few days because it was so hard to put down.

5. On the Come Up by Angie Thomas - I loved The Hate U Give, so I was glad to hear about Thomas' follow-up, which takes place in the same universe but focuses on a different group of people. Aspiring rapper Bri experiences racial profiling and brutality at the hands of some security guards, and writes a song that quickly resonates throughout her neighborhood and school. This was another fantastic, timely story.

1. Won't You Be My Neighbor? - I was a relative latecomer in viewing this documentary about the life and legacy of Mr. Rogers. It was often heartwarming and also helped reveal Rogers' true feelings for most of what television presents and his vision to present an educational and positive alternative.

2. Spider-Man: Into the Spider-Verse - I was also a relative latecomer to this animated ode to the long history of Marvel's most popular superhero. I was completely blown away by the visuals, the music, and the story beats. It balances humor and drama incredibly well, and the animation is breathtaking.

3. Sorry to Bother You - This surrealist commentary on race relations and corporate greed was funny and thought-provoking. It has stuck with me for most of the year; I've returned to certain scenes when considering my own role and participation in these issues.

4. Avengers: Endgame - I have enjoyed the 11-year journey I've been on with what has come to be known as the Marvel Cinematic Universe. Many of these movies I've counted among my favorites each year. I approached this culminating effort--along with last year's Infinity War--with both excitement and dread, because on the one hand it meant the ultimate team-up of all these characters and on the other hand the probable final farewell for one or more of them. The movie itself didn't disappoint, and in most ways it was a satisfying end to the journey.

5. Star Wars: The Rise of Skywalker - While not perfect, I enjoyed this final chapter of the third trilogy and conclusion to the entire Skywalker saga. The pace was brisk (despite being over 2 hours) and the callbacks to past movies were enjoyable. Even though this was an end, I still hope for new adventures and stories from the overall franchise on the big screen. Until then, I can enjoy The Mandalorian (see below).

1. Killing Eve - While most other people were watching the final season of a certain other show on Sunday nights earlier this year, I was glued to this cat-and-mouse thriller about an FBI agent engaged in a battle of wits with an assassin. Everything from the plot to the acting to the dialogue is brilliant, and I can't wait for season 3.

2. Stranger Things 3 - Another season, another threat from the Upside Down in Hawkins, Indiana. This had the kids not only navigating the latest monstrous iteration from beyond, but also their own and each others' hormones. It was still just as engrossing and binge-able as before.

3. Orange is the New Black - I didn't really care for the 5th or 6th seasons of this show, and as a result wasn't expecting much from its 7th and final season. But this show really went out with a bang as it explored the injustices not only of the prison system but of immigrant detention centers as well. These latter scenes were often gut-wrenching and frustrating and at times made me angry. Not much is tied up in a bow by the end, which reflects the true nature of its subject matter.

4. Good Omens - This screen version of Terry Pratchett and Neil Gaiman's story about an angel and demon trying to stop the end of the world was spot-on, with all the dry humor and incredible acting one could hope for in such an adaptation. David Tennant and Michael Sheen are both perfect as the two central characters. 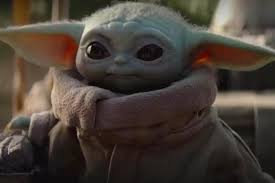 5. The Mandalorian - This Star Wars side story on Disney+ is well-told, has great action sequences, and invites us in to a part of the universe we don't get in the movies. Its space western feel satisfies the part of me that wishes there'd been more Firefly. Also, BABY YODA.

1. Spider-Man: Into the Spider-Verse Soundtrack - A big reason why I loved the movie so much was its soundtrack. It was so well-done and perfect and energizing both to help tell the story but also as a standalone album. I've been listening to this all year. Favorites include "Elevate" by DJ Khalil, "Sunflower"by Post Malone and Swae Lee, and "What's Up Danger" by Blackway and Black Caviar.

2. Alan Walker, Different World - I have one of my confirmation students to thank for this one. "Not Alone" was the first song I heard from this EDM artist, and then I found myself bopping to the entire album and looking up performances on Youtube. Other favorites are "Faded" and "Sing Me to Sleep."

3. Sara Bareilles, Amidst the Chaos - This album is less poppy than her previous efforts, and her voice is a little warmer here, both of which I like. Bareilles also wrote much of this inspired by current events, especially the need to stand up for herself and others for women's rights and equality. "Armor" and "Poetry by Dead Men" are among my favorites. 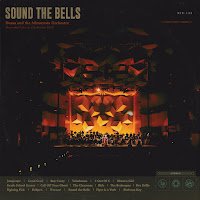 4. Dessa and the Minnesota Orchestra, Sound the Bells - Dessa has performed several times with the Minnesota Orchestra, and this live album finally lets those who didn't attend the chance to hear what these arrangements of her songs sound like. She has become one of my favorite artists, and this is another example of how talented and creative she is. I especially like "5 out of 6," "The Chaconne," and the title track.

5. The Rua, The Rua - I heard "Hey You" on my favorite community radio station and rushed to find the rest of the album. This British group has a little bit of a Delta Rae vibe, but with more of a pop sound. "All I Ever Wanted" and "You Used To" are other favorites.