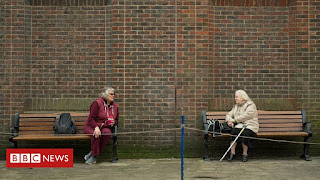 Yep, I'm there. Angelina Chapin writes of the mental health toll that coronavirus and self-isolation is taking on people:


Being isolated exacerbates mental health issues. Instead of reading during a commute or blowing off steam at a bar, people are spending more time in their own heads, especially if they live alone. Those with depression or anxiety tend to have negative thought patterns, which can snowball if they don’t get perspective from others, said Dr. Margot Levin, a New York-based psychologist. If someone is worried about a paycheck, their concerns can easily turn into a full-blown panic about the future without someone around to calm them down.

It’s also easy to become depressed when the usual markers of a successful day, such as going to work and feeling productive, don’t exist anymore, said Kanter. People feel untethered, and can easily slip into fatalistic thinking. A recent study from Chinese psychologists found that one month into the coronavirus outbreak, those who stopped working suffered from the worst health conditions and mental distress.

The article spends quite a bit of time on the negative elements, but does get to some self-care practices by the end. Things like limiting how much daily news about the virus you take in every day, reaching out to others either for your own health or to check in on theirs, and so on.

I know many people who are already struggling and getting stir crazy. Maybe that includes you. Healthy coping mechanisms are a must during this time.

In more cheery news. No, not really. I referenced this article in a post the other day, but I figured I'd highlight it again: Gideon Lichfield says we're not going back to normal for a very long time:


As usual, however, the true cost will be borne by the poorest and weakest. People with less access to health care, or who live in more disease-prone areas, will now also be more frequently shut out of places and opportunities open to everyone else. Gig workers—from drivers to plumbers to freelance yoga instructors—will see their jobs become even more precarious. Immigrants, refugees, the undocumented, and ex-convicts will face yet another obstacle to gaining a foothold in society.

Moreover, unless there are strict rules on how someone’s risk for disease is assessed, governments or companies could choose any criteria—you’re high-risk if you earn less than $50,000 a year, are in a family of more than six people, and live in certain parts of the country, for example. That creates scope for algorithmic bias and hidden discrimination, as happened last year with an algorithm used by US health insurers that turned out to inadvertently favor white people.

The world has changed many times, and it is changing again. All of us will have to adapt to a new way of living, working, and forging relationships. But as with all change, there will be some who lose more than most, and they will be the ones who have lost far too much already. The best we can hope for is that the depth of this crisis will finally force countries—the US, in particular—to fix the yawning social inequities that make large swaths of their populations so intensely vulnerable.

Many are pointing this out, but the way the United States is so far handling this crisis favors the privileged. It's how NBA players, politicians, and other celebrities have been able to be tested while many parts of the country are still begging for test kits and other supplies. There's been a lot of injustice at work in how this has played out so far, and advocacy for the less fortunate is still a need in this time as much as it ever has been.

To put it a different way. Writing on a similar theme as Lichfield, Jan Edmiston reflects on what is being revealed about us as a country during this time:


A pandemic shows us what’s actually true about us:

It’s times like these when are true nature is revealed. If we say we love God and then vote for policies that serve only the wealthy, we do not love God.

There will be many more pieces written over the next few months similar to this. Our nation is revealing some cruel tendencies, as well as the consequences of decisions the past few years that downplay threats and favor some over others.

Churches are also discovering what they can and can't live without, and how they may alter practices going forward (how many, for instance, are going to insist on keeping an online component after this?).

Some of what we're discovering about ourselves has been productive and some of it will require a reckoning. But all of it will be worthwhile to reflect upon. 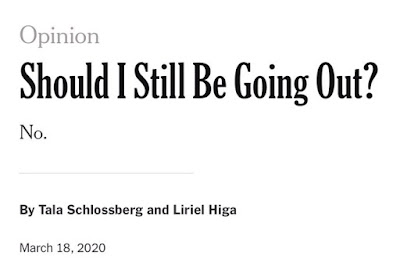 Misc. Elle Dowd on men needing to step back to allow their women colleagues a proper and full voice. Here's why viruses aren't named after places any more (spoiler: it's racism). Hopefully you've heard this already, but social distancing is not a snow day. Jan again on what we've given up for Lent.