Small Sips Wonders What "Normal" Is

We can hope. Thom Rainer reflects on how most, if not all, churches are now a blank slate due to the pandemic:


The world will never be the same. And neither will your church.

Many, if not most, of our churches are struggling and hurting. Some will not make it. The situation is bleak for many congregations.

But this period is also a time of opportunity. It is a time to rethink your church. It’s a time to shed “the way we’ve always done it” mindset and move into a new and exciting future.

For certain, we don’t change our views on the Word of God, the exclusivity of salvation through Christ, or any of the essential doctrines of the faith. But these days are a great time to rethink how you “do church.”

He lists some ideas of what churches have the opportunity to reconsider in this season of reinvention. They include questions related to stewardship, community, virtual components, dealing more forthrightly with dissension, and more.

They're worthwhile questions. It will be interesting to see how much people push for what was considered "normal" before out of a sense of nostalgia or finding one's footing again, vs. how many will show less interest in it due to what we've experienced in the meantime.

Permission NOT to consume again. Julio Vincent Gambuto warns everyone not to get sucked into the eventual hype about "returning to normal:"


From one citizen to another, I beg of you: take a deep breath, ignore the deafening noise, and think deeply about what you want to put back into your life. This is our chance to define a new version of normal, a rare and truly sacred (yes, sacred) opportunity to get rid of the bullshit and to only bring back what works for us, what makes our lives richer, what makes our kids happier, what makes us truly proud. We get to Marie Kondo the shit out of it all. We care deeply about one another. That is clear. That can be seen in every supportive Facebook post, in every meal dropped off for a neighbor, in every Zoom birthday party. We are a good people. And as a good people, we want to define — on our own terms — what this country looks like in five, 10, 50 years. This is our chance to do that, the biggest one we have ever gotten. And the best one we’ll ever get.

This is the bigger picture version of Rainer's article, where Gambuto observes that people have an opportunity to consider what we'd really like to put back into our lives once the opportunity to get back to old routines comes along. Will we really want everything that we had or wanted before?

Corporations (and churches) have a vested interest in our answering yes. But we should go by what we think rather than what they want us to think.

This sounds bad, but it doesn't have to be. N.T. Wright says that Christianity doesn't really have much to say about the coronavirus:


God was grieved to his heart, Genesis declares, over the violent wickedness of his human creatures. He was devastated when his own bride, the people of Israel, turned away from him. And when God came back to his people in person—the story of Jesus is meaningless unless that’s what it’s about—he wept at the tomb of his friend. St. Paul speaks of the Holy Spirit “groaning” within us, as we ourselves groan within the pain of the whole creation. The ancient doctrine of the Trinity teaches us to recognize the One God in the tears of Jesus and the anguish of the Spirit.

It is no part of the Christian vocation, then, to be able to explain what’s happening and why. In fact, it is part of the Christian vocation not to be able to explain—and to lament instead. As the Spirit laments within us, so we become, even in our self-isolation, small shrines where the presence and healing love of God can dwell. And out of that there can emerge new possibilities, new acts of kindness, new scientific understanding, new hope. New wisdom for our leaders? Now there’s a thought.

The Bible is rife with permission-giving for lament, and for sitting with the despair of not having clear answers to awful things. One of the biggest is Job, where the most helpful thing his friends did for him was sit in silence for a week. The problems began when they tried to offer reasons for his suffering.

Christians have resurrection at the heart of our faith. But there also come times when we have to sit at the cross for a while longer. And God will still sit there with us.

And that includes pastors. Jan Edmiston reflects on pastors who cry:


All pastors are human. We cry.

We can only offer sound pastoral care if we serve according to our scars – not our wounds. There was a time that I got choked up every time I preached and a lot of that had to do with losing my mother. I didn’t have to be preaching on mothers or even thinking about my mother, but it was a deep, deep wound.

Wounded pastors lose the capacity to serve in healthy ways because we become the pastored rather than the pastor. #BoundaryProblems

And yet, we also need to share our scars if in no other way than knowing the importance of keeping our mouths shut when other people share their brokenness because we know. We know the pain. We know to be present and we also know we can’t possibly fix it.

I can't really think of a time when I cried in front of my congregation. There were a few times I came close, though. But I admit that I've lost count of how often I cried because of something church-related when I was alone. There was no one reason: grief, loss, frustration, anger, joy, hopefulness, hopelessness.

I'd wager that there has been a fair amount of tears shed by pastors since around the beginning of March. This has been an incredibly hard season in which to minister, because so much of it is uncertain and so much of it has involved making stuff up as we go along. I think that to a certain extent we've all been ministering out of our wounds lately. Which makes checking in with one another and offering support that much more important.

It's number one for a reason. Emily Scott offers some tips for spiritual leaders while trying to minister during this time:

This week I’ve forgotten what I was doing a thousand times. Stress messes with your sequencing, and ordering your thoughts gets hard. Try to do one thing at a time.

There are nine other observations and suggestions that she lists, but I keep coming back to this first one. Many of my colleagues talk about how we're basically experiencing collective trauma and grief right now. As a result, we're not going to function to the same capacity as we would have before this started. Our brains will do things to protect us, and it's better to recognize that and be gentle with ourselves than to try operating at "normal" levels.

Sigh. David Heyward holding up a mirror as always: 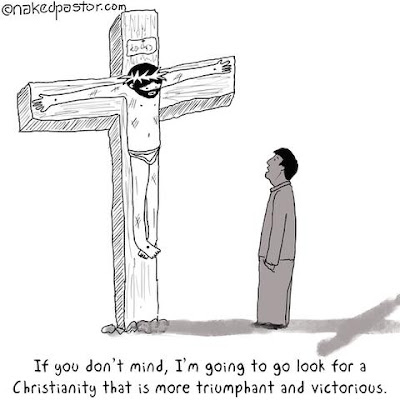 Misc. You should be wearing more pants. Jan again on who churches say they are vs. who they really are. Rainer again on things he learned the hard way as a pastor. Austin Kleon on dealing with things by doing what you know how to do. The Internet Monk blog on Christians and conspiracy theories. Also, it's been ten years since Michael Spencer died.